What I'll miss about Blockbuster

The chain's demise is now nearly certain, but one film lover explains why that isn't all good news 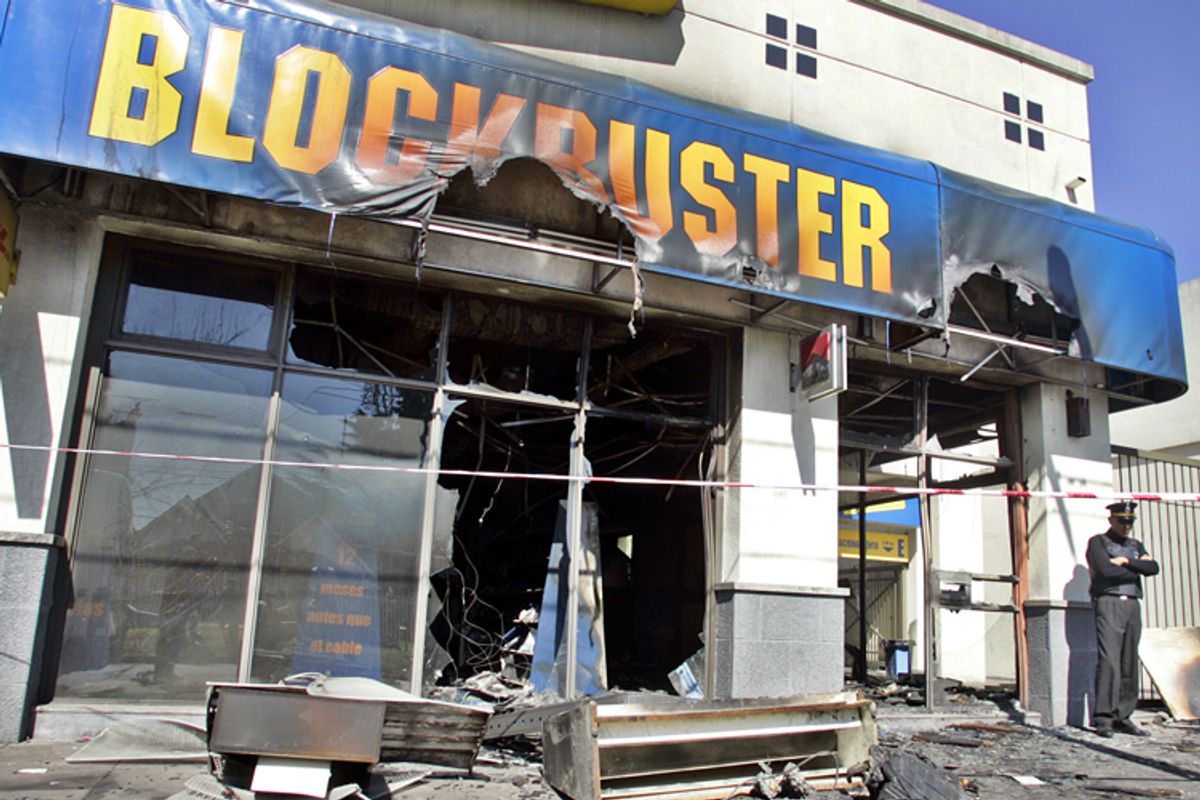 It's too soon to call it an end of an era, but Blockbuster Video's troubles make it tempting. Between the company's presence on a Wall St. 24/7 List of "10 Brands That May Disappear in 2011" and the company's bizarre delisting from the New York Stock Exchange this week (based on internal shenanigans that shareholders are trying to get to the bottom of), the company has what one might call a Wall Street image problem. And that's on top of the other, more general, more daunting problem it's been coping with for about five years now, which we've written about before and will call, for lack of a nicer phrase, The Stench of Death. As in:

"I want to see a movie tonight. Let's go to Blockbuster."

"They still have those?"

The Onion News Network spun comic gold out of Blockbuster's long slide into irrelevance three years ago in a piece advertising a "Blockbuster Museum" that promised "to transport visitors to a time before the Internet ... an authentic recreation of a video store where customers exchanged money for the short term use of videos in an archaic system called 'renting.'"

The piece exaggerated the direness of Blockbuster's situation, but only slightly. Nearly everyone I knew once visited Blockbuster as regularly as they visited the local grocery store, gas station, coffee shop and bank branch. I can't remember the last time I set foot inside a Blockbuster. Most of my friends are as obsessed with movies and moviegoing as I am, and they don't patronize Blockbuster regularly, either.

Blockbuster is still North America's largest video rental chain, but despite forays into Netflix-style online rentals, streaming video and kiosks, its prominence is still based on an old-fashioned concept -- an analog-era business model that earned them boatloads of money over the last 25 years, but seems a liability in the digital era. Forget being a day late and a dollar short; my gut feeling is that no matter how aggressively Blockbuster pushes online options and no matter how many kiosks it opens, it'll never be at the center of popular culture as it was during its heyday, roughly 1990-2000. Blockbuster is the Pennsylvania Railroad Company circa 1957; it's a bit late to start buying planes.

When I read business page thumbsuckers cautioning potential stockholders that there's still plenty of corporate life left in Blockbuster, the phrase that pops into my head is, "Who are you going to believe, me or your lying eyes?" A decade ago you could walk or drive past pretty much any Blockbuster during daylight hours and see a fair number of people milling about -- and not all of them would be wearing company uniforms. After happy hour on weekdays, or anytime over the weekend, the place was likely to be packed. Today? In my neighborhood, except for weekend nights, it's likely to be nothing but employees. And tumbleweeds. And crickets. And maybe a guy looking to rent a videogame.

There used to be four or five Blockbusters within walking distance of my apartment in Brooklyn. Now there's one, and I keep thinking it's closed until I peer in for a second and spot that one clerk slouched behind the counter. Odds are he's either talking on his cell phone or reading Vibe.

Along with pretty much every other movie-obsessed person I knew, I used to go to Blockbuster two, three, even four times a week. They were in heavy rotation along with a couple of other independent stores that had a better selection -- really, who didn't? -- of foreign films, U.S. indies, off-the-beaten track older movies, and specialty titles. At some point my patronage slacked off. I can't recall exactly what made me stop going regularly. It was probably a combination of factors, all of which could be grouped under the general heading "the Internet."

I'm not just talking about web-based rental services such as Netflix (and GreenCine, which has a vastly superior selection of obscure titles), but various legal and illegal downloading services, and YouTube, which is fast becoming the Internet's unofficial hub of collective memory. There's another, related aspect: the cinephile community (I suppose I should put scare quotes around "community," and I'll explain why in a second) that has sprung up online.

As recently as a decade ago, if you were into movies, really into movies, you either became one of those intense go-it-alone obsessives, or you joined a makeshift circle of like-minded individuals -- buffs you met in school or at work or while standing line at a movie theater, people with whom you could plan group outings to the local megaplex (often followed by spirited arguments over coffee). If you were lucky enough to fall in with a group like that, and if you weren't a a complete dunderhead that reflexively resisted anything new, your horizons expanded. An argument about the relative quality of this movie vs. that movie might lead a friend to drag you to see a film you might not otherwise have bothered with, or hand you a VHS tape (remember those?) containing a copy of some beloved, commercially unavailable title he or she had taped off local TV. Maybe the ads were edited out via the remote control pause button, maybe not. (There was always one person in your group you who was an absolute wizard with the pause button, someone whose sense of timing was so impeccable that when you watched one of their tapes, you never saw one single frame of an ad. But as my tombstone will one day read, I Digress.)

Today I'm still part of a moviegoing circle, but it has expanded far beyond my neighborhood. I'm in regular contact with dozens of people via email, Facebook and Twitter who argue with me about movies, make recommendations, drop obscure and sometimes marvelous bits of trivia on me, send me links to outtakes and unproduced screenplays and deleted scenes, scholarly articles and photo galleries and hilarious rants about this director or that actor.

I've never actually met most of these people face-to-face. Is that a good thing or a bad thing? Both. The electronic parameters of Internet relationships mean that you get to enjoy the benefits of other peoples' enthusiasm without the accompanying melodrama. If you were ever part of one of the circles I've described, you found yourself wondering, at one point or another, "Why am I friends with this person? We have nothing in common but movies, and if it weren't for that, I'd cross the street if I saw him." Internet friendship means you don't have to follow up an intoxicating geek-fest argument about Stanley Kubrick vs. Martin Scorsese with a two hour discussion of your friend's latest workplace drama, or her recent breakup with that guy who always wore a hoodie and kept forgetting her birthday.

The rub, of course, is that any friendship that satisfies the first part of that description and not the second isn't a real friendship. Which brings me to the one part of Blockbuster's slow fadeout that is worth lamenting: the sense that the human touch, or what's left of it, is being lost. Mind you, I'm not talking about Blockbuster's idea of the human touch, because the chain never had one. The Blockbuster "experience" generally ranged from anonymous but painless to deeply annoying. They underpaid their employees and treated them like cattle, and with each passing year they dropped more and more of the pretense that they considered movies to be something other than goods to be lined up on shelves.

I'm talking about the pre-Internet experience of daily life, which was more immediate, more truly interactive: in a word, real. Bland and aloof as it was, Blockbuster was a part of that -- and for certain types of people, it was a big part. There was nothing special about Blockbuster as a business, but special moments did happen there, simply by virtue of the fact that the stores were everywhere, and they stocked a lot of movies, and people who wanted to see movies went there regularly, sometimes alone but more often in the company of relatives or friends. You'd go through the front door and pass the front counter -- where an employee was checking in a pile of returned videos (when opened, the boxes went whuck!) and check out the new releases wall (Seventy-five copies of "Hard Target?" Seriously?). Then you'd fan out among the aisles and try your luck.

I have many fond memories of roaming the aisles with my friends, arguing about which titles to rent, calling out to each other from across the store when we found something interesting, perusing the fine print on video boxes and discovering odd, marginal credits. (Did you know that the legendary jazz saxophonist Stan Getz had a special music credit on the awful 1980 vigilante film "The Exterminator"? I saw that on the box and rented the movie; turns out Getz also has a brief cameo as himself.) I had some involved, sometimes pivotal conversations while loitering in the aisles at the Blockbuster near my school or apartment or workplace, including one in which my best friend helped me talk myself into breaking up with a girl I was dating who was beautiful and charming but not remotely interested in any film released before the year of her birth. She fell asleep during "Dr. Strangelove."

"You've got to break up with her, Matt," my friend advised me. "Hey, have you seen the Albert Brooks movie 'Real Life'? Seriously. It's one of the funniest films ever made."

That kind of thing never happens when you're browsing Netflix.