When friending started to overtake friendship, I stopped accepting. Here's what I learned 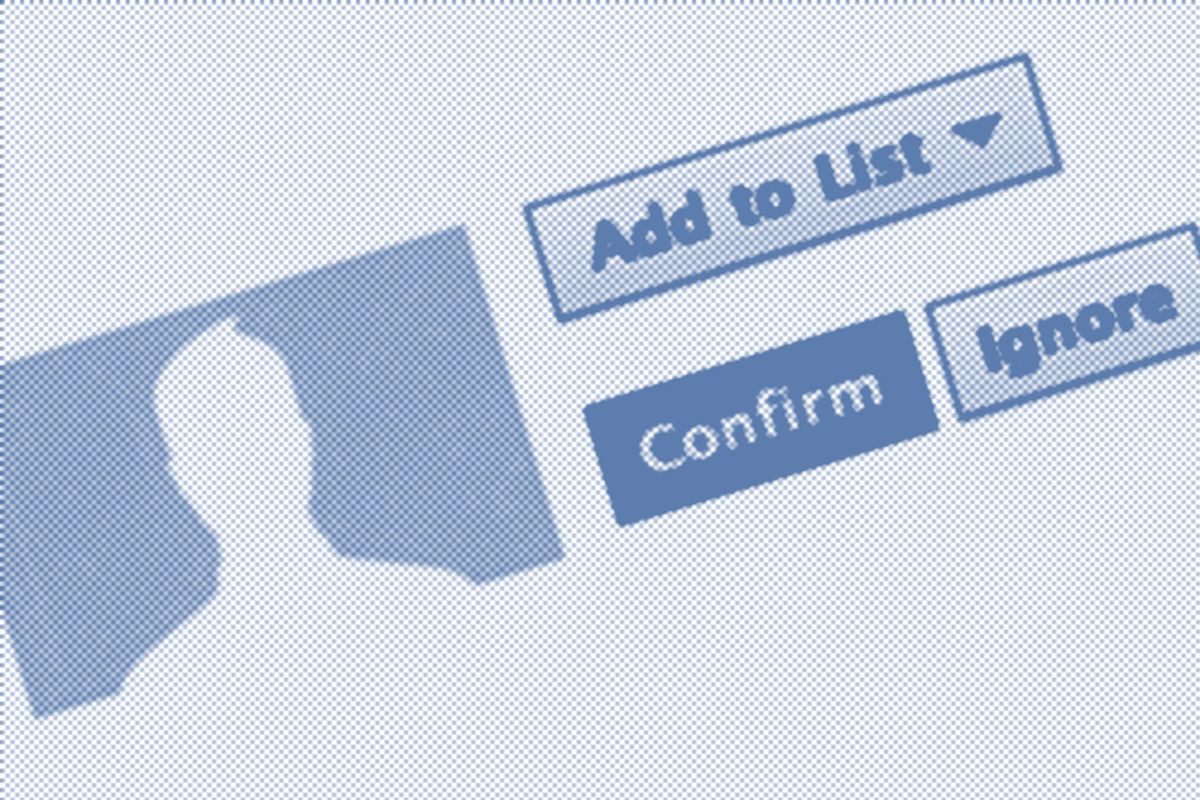 A few days ago, as a birthday dinner for a close friend wound down, the bright, witty woman I'd been seated next to asked the inevitable. "So ... can I find you on Facebook?" she ventured. "Kind of," I replied, "but how about I give you my e-mail instead?" The next morning, I awoke to a new request from a person I met a year and a half ago at a professional event. It took about a nanosecond to click Ignore. These are nice people, by the way, people I'd probably be lucky to count among my online intimates. But it's not going to happen.

Let me tell you why.

When I first got on Facebook three years ago, I promiscuously added anyone of even the slightest acquaintance. Maybe you did too. As long as the name wasn't completely unfamiliar and the person didn't seem like a spambot, why not? At first, I found mostly fellow media types and geeks. Then old chums from the past started joining. And then the friends of the friends.

You know what happens next. Soon, you find yourself sharing your personal thoughts with close confidants, professional colleagues, parents from the playground, ex-lovers, and people you know exclusively through your other virtual communities. And as the friend list gets longer, each new request becomes a fresh opportunity for awkwardness. What if you don't want your babysitter's mom to read your latest ribald remark? What if you'd rather not spend eternity getting Farmville updates from somebody you had a one-night stand with? What if looking at vacation photos from that former co-worker who stabbed you in the back a decade ago isn't your idea of fun? Just because you're friends with 10 people from your old school/job/marriage, are you now socially obliged to befriend all of them?

There's no great way to handle it. Ignoring seems so harsh — as those of us who've had our own overtures met with resounding silence know. (Don't even get me started on the brutal sting of a well-timed defriending.) Yet accepting can be so masochistic. And sure, you could just hide the person's news feed, but what about that resembles friendship? As a pal groaned recently, "I have a dozen pending requests I don't know what to do with." Or, as another put it more pithily, "Facebook? UGGGGGGGH."

The pleasures of Facebook have been multitude. The casual addition of a colleague's ex-girlfriend led to a terrific offline relationship. A memorably sweet reunion for fellow refugees from my tiny, now shuttered high school would never have happened had we not found each other on FB. And almost daily, someone I love but don't get to see enough in person says something that gives me the chance to cheer or laugh or offer solace.

But when my friend list began to swell to unmanageable proportions, I found it increasingly difficult to weed out the dialogue with people I really liked from the random news from people I had nothing in common with. I relearned that some of them were really obnoxious. I was getting poked and superpoked and invited into mafia wars and invited to become a fan of people and things I was no fan of, all the damn time. As they say on Facebook, I unliked it. I unliked it a lot.

Then, some real problems kicked in. A person I'd had an online dispute with years ago began viciously trolling me elsewhere — and suddenly I didn't feel so enthusiastic about adding any more of our "mutual friends" from the same virtual community. A long-ago acquaintance found me via a nostalgic Facebook group, and undaunted by the fact I never replied, deluged me with escalatingly strange, obsessive e-mails. That was the end of my participation in that group, and my desire to add anyone else from that time in my life.

I blocked the disturbing people. I did a major overhaul of my privacy settings. I left a bunch of groups because their proximity to toxic individuals made me feel gun-shy and depressed. And as I did so, I began to consider the word "friend" again. Was it a semi-famous person I'd met a handful of times — and who had thousands of other "friends" just like me? Was it my racist neighbor? Someone I'd had a conversation with once? Out they all went, in a spring spree of defriending. I stopped adding friends, stopped accepting new ones.

It still feels odd — and decidedly unfriendly — to ignore people, most of whom I'd wager just enjoy the supportive, funny aspects of FB as much as I do. With each "ignore" comes a little pang of guilt. Then the sweet relief kicks in.

In the months since my self-imposed embargo, I've noticed how rarely new requests come with so much as two lines of introduction. Socializing is, for many, now a one-click affair — as easy as clicking Add or Accept. When someone does take the time to write a note, whether it's a pal from the old neighborhood or a random reader, I write back. But I don't want to collect names on a list like they're seashells on the beach. So if we should meet at a party and hit it off, let's have coffee or see a movie sometime. Let's be friends in real life. And who knows? Maybe if it goes really well, someday, we can even be friends on Facebook.