The show's season premiere hammers home the gap between glossy fantasy and our mundane, angst-ridden reality 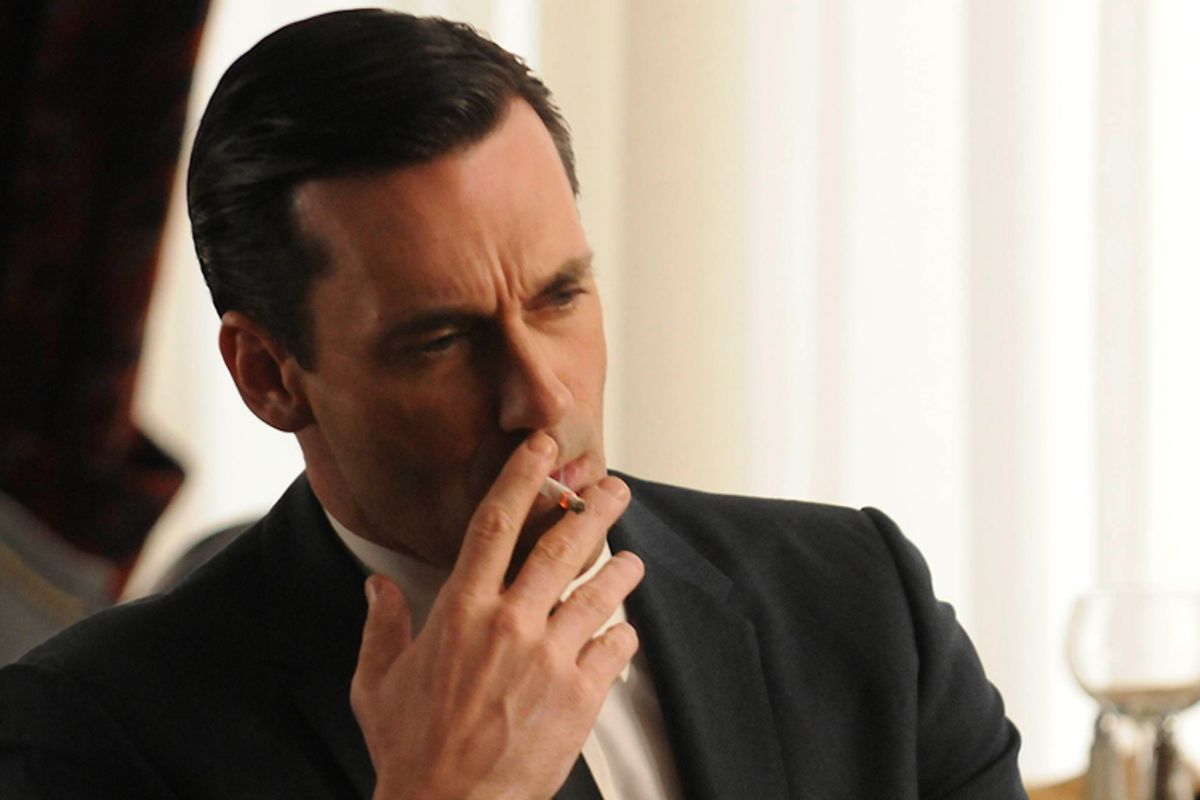 Americans are constantly in search of an upgrade. It's a sickness that's infused into our blood, a dissatisfaction with the ordinary that's instilled in us from childhood. Instead of staying connected to the divine beauty and grace of everyday existence -- the glimmer of sunshine on the grass, the blessing of a cool breeze on a summer day -- we're instructed to hope for much more. Having been told repeated stories about the fairest in the land, the most powerful, the richest, the most heroic (Snow White, Pokémon, Ronald McDonald, Lady Gaga), eventually we buy into these creation myths and concede their overwhelming importance in the universe. Slowly we come to view our own lives as inconsequential, grubby, even intolerable.

Meanwhile, the American dream itself -- a house, a job, a car, a family, a little lawn for the kids to frolic on -- has expanded into something far broader and less attainable than ever. Crafty insta-celebrities and self-branding geniuses and social media gurus assert that submitting to the daily grind to pay the mortgage constitutes a meager existence. Books like "The 4-Hour Work Week" tell us that working the same job for years is for suckers. We should be paid handsomely for our creative talents, we should have the freedom to travel and live wherever we like, our children should be exposed to the wonders of the globe at an early age.

In other words, we're always falling short, no matter what our resources, and we pass this discontent to our offspring. And so millions of aspiring 3-year-old princesses hum "Someday my prince will come!" to themselves, turning their backs on the sweetness of the day at hand.

Maybe this is why AMC's hit series "Mad Men" (premieres 10 p.m. Sunday, July 25) resonates so clearly at this point in history, when the promise of the boom years has given way to two wars, a stubborn recession and a string of calamities that threaten to damage our way of life irreparably. Somehow "Mad Men" captures this ultra-mediated, postmodern moment, underscoring the disconnect between the American dream and reality by distilling our deep-seated frustrations as a nation into painfully palpable vignettes. Even as the former denizens of Sterling Cooper unearth a groundswell of discontent beneath the skin-deep promises of adulthood, they keep struggling to concoct chirpy advertising messages that provide a creepily fantastical backdrop to this modern tragedy. Don (Jon Hamm) sighs deeply and unlocks the door to his lonely apartment, Peggy (Elisabeth Moss) whiles away her waking hours trading casual quips with co-workers, but happiness is still just a shiny kitchen floor or a sexy bikini or a cigarette away.

As the American dream is packaged for mass consumption, these isolated characters find themselves unnerved by its costs. Alternating between befuddled breadwinner and longing lothario, Don has finally put his ambivalence toward Betty (January Jones) behind him: He's leaving his marriage and focusing on the new ad firm as his true passion, just as we saw at the end of the third season. But can someone as conflicted as Don commit wholeheartedly to anything? Not surprisingly, the premiere seems to suggest that Don may not feel comfortable  yielding his entire life to his career. And now that he's free to pursue any woman he wants, instead of focusing on a woman whose intellect matches his own (like so many of his lovers, from Midge to Rachel to Suzanne the schoolteacher), Don appears likely to be drawn in by the same manipulative style of femininity that Betty embodied.

Of course, Roger Sterling (John Slattery) has always provided a sort of an omen of where Don was headed, hence their volatile relationship. Roger also has a somewhat childish habit of falling for anyone who makes him feel powerful. First there was Joan (Christina Hendricks), whose standoffish charms sometimes obscure the fact that she's the most adaptive, resilient and personally effective character on the show, and next there was Jane (Peyton List), a character who could just as easily be called That Crying Girl, who's developed into more of a high-maintenance daughter to Roger than a real partner.

Roger and Don may represent the wildly fluctuating fortunes bequeathed to the masters of the universe: Told that they can have everything they want, these two are haunted by a constant desire for more. But what variety of more will suit them this time? The answer typically -- and somewhat tragically -- seems to spring out of impulse and ego and fear more often than any real self-reflection or wisdom.

Betty represents the female version of this lack of foresight, and as the fourth season develops, the arbitrary nature of her recent decisions starts to become more apparent. Showing her usual startling lack of insight, Betty smoothes over bumps in the road with Henry Francis (Christopher Stanley) while lashing out at her daughter, Sally (Kiernan Shipka). Betty has always had a life that's built around men, but she entirely lacks Joan's wisdom, survival instincts and compassion, and instead tends to resort to the foot-stomping of a petulant child. But what else can you expect from someone whose closest relations -- overbearing father, paternal but deceitful husband -- have consistently rewarded her for quietly, obediently playing along with their games?

Having taken the opposite path in life, Peggy represents the victories (and defeats, and insults) of the single career girl. At the start of Season 4, Peggy appears more committed to this path than ever, and she's growing much more resilient and unflappable in the face of her co-workers' personal slights. Nonetheless, we'll surely see many of the fairy tales Peggy has been forced to give up along the way. Likewise, selling a kittenish flavor of femininity and sex while asserting your own power can't be an easy tightrope to walk for Peggy, and it's this uncomfortable spot that makes her one of the show's most riveting characters.

The ambition and conflicted desires of these characters in their pursuit of happiness is what makes "Mad Men" such a singular and resonant reflection of a particularly American puzzle. But even as it strains to capture the transformation of the American dream into a commodity that can be bought and sold, "Mad Men" itself is the ultimate, endlessly marketable über-brand: Everyone and everything is gorgeous to the point of luminosity, a pitch-perfect reflection of the times that's been polished to such a high gloss that it upstages our hazy memories of that era completely. The terse exchanges, the sly banter, even the lighthearted quips dance over the mundane drudgery of workplace interactions like mean-spirited sprites. Bourbon glistens among ice cubes in immaculate glasses, fire engine red lipstick frames heartbreakingly white teeth, fingers tap perkily on typewriters as young men amble by, their slumped shoulders hidden behind the heroic cut of their tailored suits. Don Draper's unmoving cap of hair gleams like a beacon, sending some Morse code straight to female brain stems, stirring long-buried childhood notions about one day having a husband who looks just like a Ken doll.

Behind the impeccable facade, of course, we see the longing in Pete Campbell's (Vincent Kartheiser) tired face, we see the fear in Betty's eyes as she sits down to dinner with her brand-new mother-in-law. The lovely details of this fantasy -- the hairstyles, the costumes and the props that come with the dream -- occasionally fail to obscure the confused humans who straighten their shoulders and dry their eyes and take the stage day after day, dutifully mouthing lines about the thrills of work and family, all of it the invented, peppy rhetoric of laundry detergent jingles.

This is the genius of "Mad Men," its dramatic reenactment of the disconnect between the dream of dashing heroes and their beautiful wives, living in style among adorable, adoring children, and the much messier reality of struggling to play a predetermined role without an organic relationship to your surroundings or to yourself. We're drawn to "Mad Men" week after week because each and every episode asks us, What's missing from this pretty picture?

What's missing on both a personal and a broader scale is empathy, of course -- embodied most gruesomely in the lawn mower accident last season, but also wrapped up in the sharp edicts Don and Betty issue to their children, in the distracted insults Don aims at Peggy, in the self-involved funk of Joan's doctor fiancé, in the cruelty that springs from Pete's existential desperation. While "Mad Men's" detractors often decry the empty sheen of it all, claiming that it has no soul, clearly that's the point. The American dream itself is a carefully packaged, soulless affair. This is the automobile a man of your means should drive. This is the liquor a happy homemaker like yourself should serve to your husband's business guests. As absurd as it seems to cobble together a dream around a handful of consumer goods, that's precisely what the advertising industry did so effectively in the '50s and '60s, until we couldn't distinguish our own desires from the desires ascribed to us by professional manipulators, suggesting antidotes for every real or imagined malady, supplying escapist fantasies to circumvent the supposedly unbearable tedium of ordinary life. In show creator Matthew Weiner's telling, the birth of the advertising age coincides directly with the birth of our discontent as a nation -- and what got lost in the hustle was our souls.