She and her pals use the "Ground Zero mosque" to stir anti-Muslim fear. But the world's greatest city says no 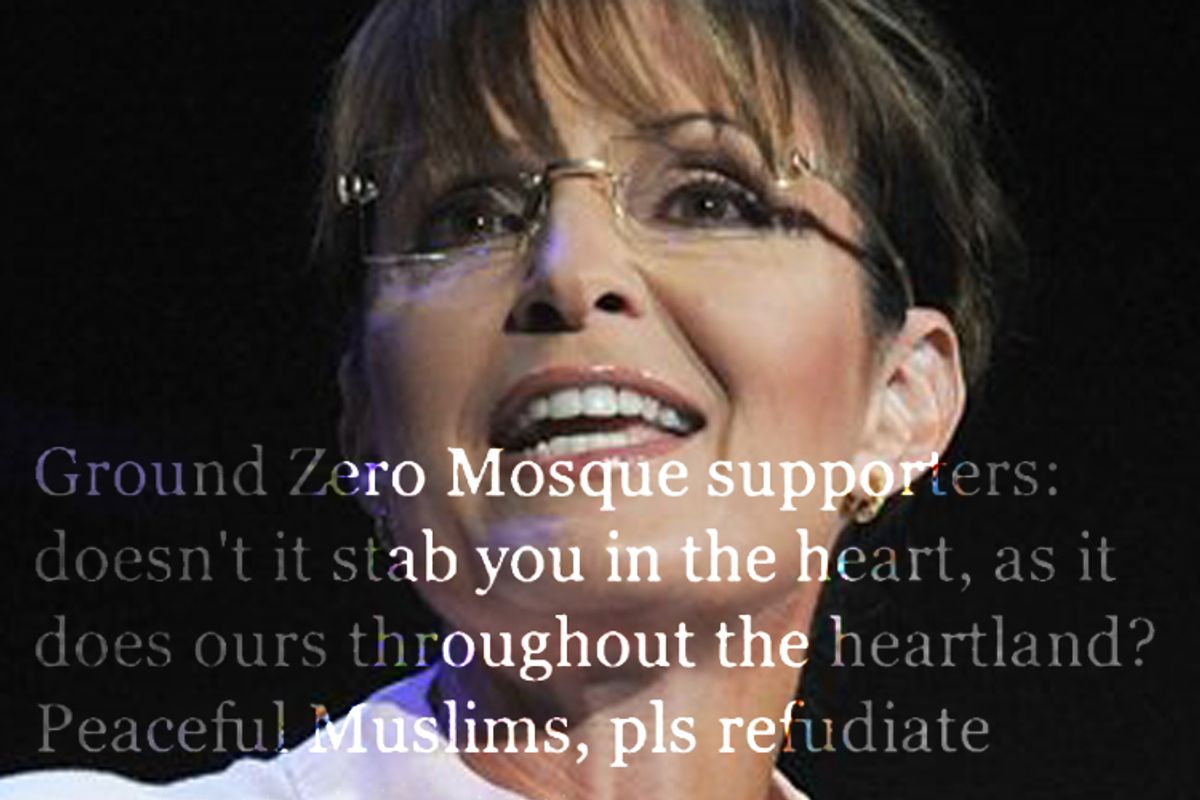 Sarah Palin’s semiliterate yet somehow Shakespearian tweet protesting the "Ground Zero mosque" has drawn fresh attention to a cause that excites bigots across the country. Her friend Mark Williams, the racist loudmouth expelled from the Tea Party movement over the weekend, is already leading a national campaign of agitation against the "mosque" and the worshippers of Islam’s "monkey god." Florida evangelist William Keller wants a piece of the fame and fortune, too. New York Republican gubernatorial candidate Rick Lazio even seems to believe that opposing the mosque — and perhaps all mosques — will revive his stagnating candidacy.

Like so much right-wing agitation, the campaign against the mosque in lower Manhattan — actually an interfaith community center known as the Cordoba House that will include a mosque — depends on fear and misinformation. Its political purpose is to demonize Islam and its adherents, no matter how peaceful and moderate, by pandering to prejudice and inflaming emotions left raw by the losses of 9/11.

The chief argument against the construction of Cordoba House, echoed by Palin’s tweet, is that Islamic prayer two blocks north of the World Trade Center site would offend the memory of the 3,000 innocents murdered there. While families of the deceased have been mobilized to oppose the project, thugs like Williams are whipping hysteria and hatred with genocidal language:

Consider it for what it is, a 13 story tall middle finger being flipped at the victims of 911 and America as a whole by animals. Ground Zero is the last place that any legitimate religion would ever plant a “cultural center” to advance inter-faith understanding…

It is a project of American Society for Muslim Advancement and the Cordoba Initiative, essentially the same group of apologists (but under 2 different names) for terrorists and the animals who use it as a terrorist ideology. They cloak their evil with new age gibberish that suggests Islam is just misunderstood.

At the same time, supposedly more "responsible" figures like Lazio claim that building a mosque in downtown Manhattan raises "serious security issues," although he is unable to articulate what those problems might be.

To clear the air clouded by all these noxious effusions, it’s important to understand some basic facts about the project — and about the Constitution that Palin, Williams and the rest of the Tea Party movement claim to defend.

The victims of 9/11 included numerous Muslims, as anyone browsing the memorial sites can see. Most of them were working New Yorkers who labored as cooks, waiters, cleaners and security guards in the World Trade Center — people whose suffering concerned the perpetrators of the attack no more than those of the thousands of other Muslims they have murdered in Iraq, Afghanistan, Pakistan and elsewhere around the world. No religious faith has an exclusive claim on opposition to Islamist terrorism, and no religious group should be excluded or stigmatized in memorializing that opposition. The people who want to build Corboba House have every legal right to do so, and those rights are not subordinate to anyone’s religious prejudice.

The Cordoba Initiative, sponsor of Cordoba House, is an organization that rejects violent extremism and encourages civil dialogue between the Islamic world and the West. So far nobody has found any evidence that Corboba represents a nefarious conspiracy to establish a beach head for Islamism, despite much windy rhetoric devoted to that theme. Moreover, contrary to Lazio’s posturing, New York Police Commissioner Ray Kelly has declared bluntly that he sees no security concerns in the construction of a mosque in that neighborhood. His calm, measured and appropriate response represents the realistic perspective of a law enforcement official who does more to fight terrorism every day than Williams, Lazio or Palin will accomplish in their combined lifetimes.

Finally, the constitutional guarantees of freedom, including freedom of worship, were not suspended by 9/11, despite the efforts of certain politicians and partisans. As Mayor Michael Bloomberg pointed out in defending the Cordoba House project, its opponents are undermining the liberties that define us and distinguish us from our enemies:

"I think our young men and women overseas are fighting for exactly this," he said in reaction to Palin. "For the right of people to practice their religion and for government to not pick and choose which religions they support, which religions they don't." Scott Stringer, Manhattan’s brave borough president, who like Bloomberg happens to be Jewish, challenged her directly in his own tweet: "@SarahPalinUSA NYers support the #mosque in the name of tolerance and understanding. You should learn from the example we set here in #NYC."

They're right. New York is great because of its diversity, tolerance and devotion to American ideals — and because nobody here pays much attention to the likes of Sarah Palin, Mark Williams or even that sad opportunist Rick Lazio.