A new poll shows the movement is pro-big business, pro-GOP and united against the "socialist" Obama 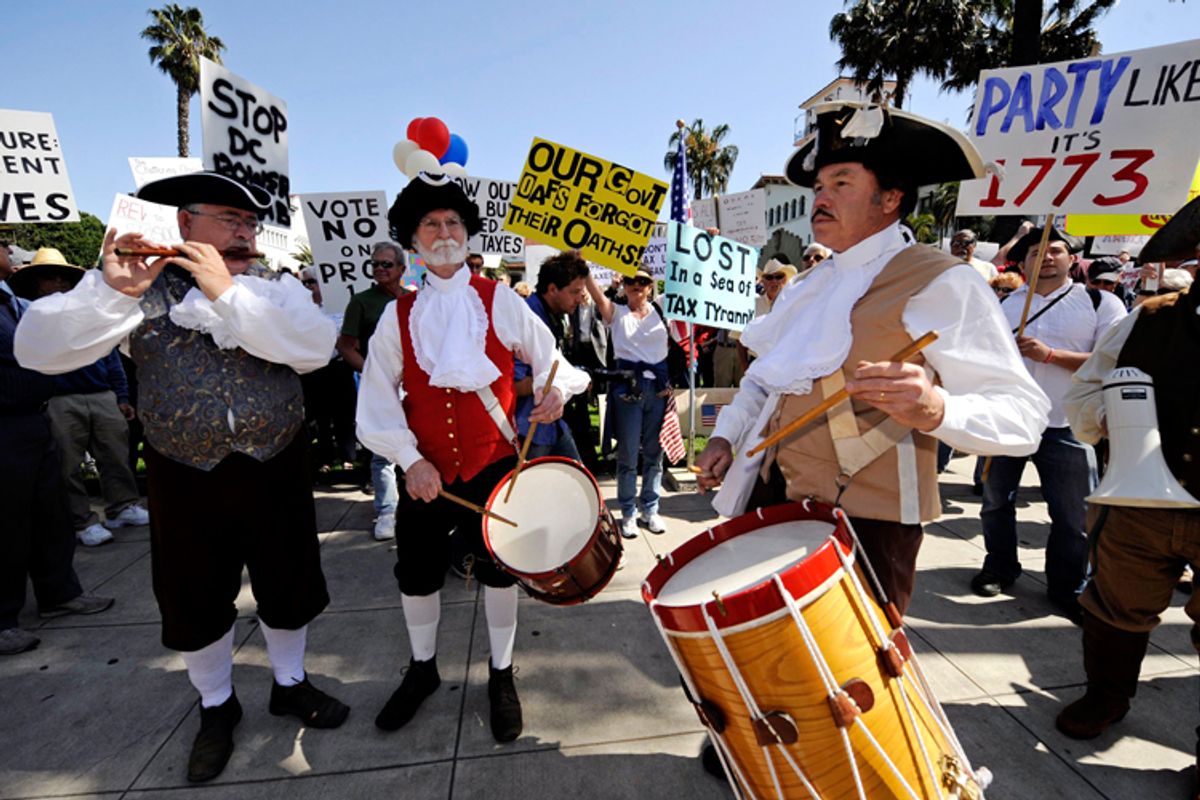 Too many reporters have described the Tea Party movement as some kind of populist uprising at "elites" channeling economic anxiety about the recession. Sadly (because he should know better), the New York Times' Matt Bai is typical, writing just last month: "The only potent grass-roots movement to emerge from this moment of dissatisfaction with America’s economic elite exists … in the form of the so-called Tea Party rebellions that are injecting new energy into the Republican cause."

The latest Democracy Corps poll and report might make Bai and his editors think about a correction — or at least a follow-up. From a database of 2,600 interviews between April and June, in which "strong supporters" of the Tea Party supporters made up a quarter of respondents, Democracy Corps concluded that Democrats should be worried about the Tea Party's role in the 2010 midterms, but warned, "Don't mistake it for a populist rebellion."

Far from an uprising against Wall Street and big business, Tea Partiers are among the most pro-big-business segments of the electorate, the poll found: 54 percent rate big business warmly; only 20 percent coolly.

And they are likewise far from the independent, nonpartisan movement some in the media seem to believe they are: The Tea Party is strongly affiliated with the GOP: 86 percent of movement supporters and activists either identify with or lean toward the Republican Party, and 82 percent say they will vote for the GOP candidate in the November 2010 midterms; only 9 percent say they won't. That margin is actually higher than it is among self-described "conservatives," where it's 72 to 18 percent.

Appallingly, the movement is united by the false belief that Barack Obama is a socialist: 90 percent of Tea Partiers polled call our centrist corporate-Democratic president a socialist. The authors write:

The driving force behind their negativity toward Obama is the belief that his actions and goals are un-American. Throughout the focus groups, people repeatedly invoked “Obama’s Socialist Agenda” — with the occasional communism comment thrown in. Participants said it is this socialist agenda — which underlies all of Obama’s policies seeking to make citizens more dependent on the state — that has put people over the edge and launched a movement that has been percolating for a long time.

There's bad news and good news for Democrats in the findings. The bad news is, Tea Partiers make up a quarter of likely voters in November, and they're fired up: 94 percent say they are almost certain to vote, 10 percent more than the general likely electorate. (They comprise slightly fewer likely voters for 2012, 21 percent.)

The good news is, there seems to be little chance for the Tea Partiers to cross over and convert the rest of the electorate. In a separate poll of likely voters who said they are not Tea Party supporters, done in mid-June, 56 percent described the movement as "very extreme," only 20 percent said it "shared their values," and just 17 percent said it "has realistic solutions to the country's problems." Interestingly, that group was split on whether the Tea Party is "motivated by racial feelings about Barack Obama," with 39 percent answering yes, and 38 percent answering no.

That was the only mention of Obama's race in the Democracy Corps report, which may have been a smart move, since any findings about race or racism would likely grab all the attention, eclipsing the role of economic and political beliefs in the movement's rise. You can see that race might play some role in the way Obama is feared, even hated, reading a couple of the interviewee's comments: One says: "I doubt [Obama’s] desire to protect our Constitution as was originally delivered by our Founding Fathers, of which my ancestors were a part of. I doubt his loyalty to us and I doubt his ability to keep his word." Clearly that respondent doesn't know the deep American roots of Obama's white mother's family.

Of course, I also think 90 percent of the Tea Partiers falsely believe that Obama is a socialist, and, as Democracy Corps puts it, "un-American," at least partly because of his very different racial and ethnic background. As I've written before, Bill Clinton and Jimmy Carter may have been labeled socialist by fringe groups, but there was no large movement devoted to smearing them with the term. It doesn't seem a leap to say it may be easier to believe this president espouses a foreign-seeming ideology like socialism (which outside of a couple of places, never took off in America the way it did around the world) because he seems like a foreigner himself. All Democracy Corps says is this: "It is hard to overstate how defining Obama is for them."

There are other findings that mostly confirm what we already knew: Tea Party supporters are, of course, more likely to be white, male, married and older than all other likely voters; 85 percent are white. They love Glenn Beck, Rush Limbaugh and Sarah Palin, although some expressed "disappointment in her ability to perform as a leader and questioned her qualifications," the poll found. One way they differ from mainstream Republicans? They're less likely to go to church, and more of them told pollsters they feel "warmly" about the National Rifle Association (77 percent) than about antiabortion groups (61 percent).

The whole report is well worth reading. While Democracy Corps, run by Stan Greenberg and James Carville, mostly works for Democrats, their polling is respected, and they don't shy away from giving Democrats bad news (there's plenty in this poll.) This quote summed up a lot of what they found, and was rather depressing: