Now reopen Breitbart's ACORN fraud -- and get the story right 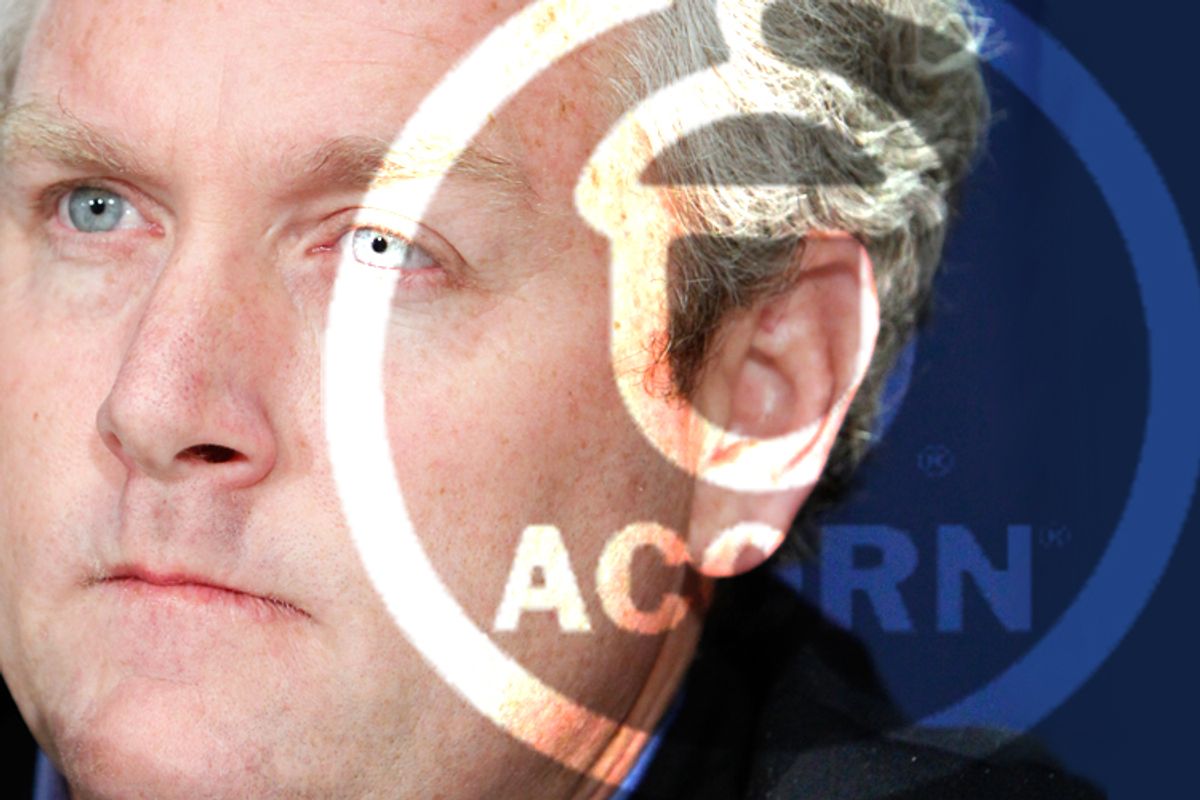 Former USDA official Shirley Sherrod, a dedicated public servant innocent of the prejudice and misconduct falsely imputed to her, deserves justice. As soon as the White House and Tom Vilsack restore her job, with an appropriate apology, they will begin to remove a stain of cowardice from their administration. But while that may be all the government can do, it isn’t sufficient to close this case.

Real justice, as I suspect Sherrod would agree, also requires due process for Andrew Breitbart, the Internet impresario who framed her on his Big Government website. In these circumstances, that means a fair, thorough and tough examination of the media fraud that launched his operation last year: the ACORN tapes, whose misuse by Breitbart closely parallels his behavior in the Sherrod affair.

Recalling Breitbart from his days as eager lackey to Matt Drudge, I warned from the beginning that nothing he produced would resemble journalism. More than once since then, I’ve  mentioned the accumulating evidence of deception by O’Keefe and Breitbart in creating and then publicizing the ACORN tale. It was a "scandal" that became a national story only after wildly biased coverage on Fox News Channel, followed by sloppy, scared reporting in mainstream outlets, notably the New York Times, the Washington Post, CNN, and the national TV networks (some of whom flagellated themselves for failing to publicize this canard sooner!).

Investigations by  former Massachusetts Attorney General Scott Harshbarger, Brooklyn District Attorney Charles J. Hynes,  California Attorney General Jerry Brown, and the  nonpartisan Congressional Research Service, among others, have served to exonerate ACORN of the most outrageous charges of criminality  (while still criticizing ACORN employees and leadership). More important, from the perspective of journalistic ethics, those investigations revealed that the videotapes released and promoted by Breitbart’s website were selectively and deceptively edited to serve as propaganda, not news.

The Harshbarger report, commissioned by ACORN’s own board of directors, pointed to signs of chicanery when it was released last December. Although O’Keefe, his associate and fake "prostitute" Hannah Giles and Breitbart all refused to speak with Harshbarger, his researchers at the Proskauer Rose law fir were able to make preliminary comparisons between audio and video files on the Big Government website:

The videos that have been released appear to have been edited, in some cases substantially, including the insertion of a substitute voiceover for significant portions of Mr. O'Keefe's and Ms. Giles's comments, which makes it difficult to determine the questions to which ACORN employees are responding. A comparison of the publicly available transcripts to the released videos confirms that large portions of the original video have been omitted from the released versions.

For months, Breitbart continued to resist every request that he release the full, unedited ACORN videotapes, which ought to have alerted editors and producers that something was wrong. But then in the course of the California investigation, Brown struck a plea deal with O’Keefe, who was in jeopardy of indictment for violating the state’s privacy laws. (According to Brown’s final report, "the facts presented here strongly suggests that O’Keefe and Giles violated state privacy laws and provides fair warning to them and others that this type of activity can be prosecuted in California.") The plea agreement deal forced O’Keefe to turn over the complete set of tapes to state investigators. Brown’s verdict on their misuse was scathing. "The evidence illustrates that things are not always as partisan zealots portray them through highly selective editing of reality," he said. "Sometimes a fuller truth is found on the cutting room floor."

Meanwhile, Times public editor Clark Hoyt, like his colleagues in other mainstream outlets, has been forced to acknowledge gross errors in the paper’s coverage – such as the false claim, encouraged by Breitbart and Fox, that O’Keefe went into the ACORN offices "dressed so outlandishly [as a pimp] that he might have been playing in a risqué high school play." In fact, the filmmaker never wore his ridiculous pimp regalia into a single ACORN office, always dressing instead like a buttoned-down junior accountant.

Amazingly, the New York Times never covered the Harshbarger report and gave little or no coverage to the other deconstructions of the Big Government “scoop” by law enforcement. Last March, when Hoyt finally offered an excuse for the failure of the Times to adequately correct and explain the complex truth behind Breitbart’s ACORN scam, it sounded weak:

The report by Harshbarger…was not covered by The Times. It should have been, but the Acorn/O’Keefe story became something of an orphan at the paper. At least 14 reporters, reporting to different sets of editors, have touched it since last fall. Nobody owns it. Bill Keller, the executive editor, said that, “sensing the story would not go away and would be part of a larger narrative,” the paper should have assigned one reporter to be responsible for it.”

Since  then much more evidence has emerged, without generating the kind of reassessment that is overdue. Now Breitbart has struck again, manipulating a gullible media establishment and a frightened administration in an attempt to destroy the reputation of an innocent federal employee.

Even today, despite overwhelming proof that he posted a snippet of the Sherrod video without any pretense of due journalistic diligence, he replies with taunts and gibes rather than any honest answers. His latest smear is to claim that the white farmers who vouched for Sherrod are not who they claim to be. On CNN, he brazenly demanded that John King explain how the cable network had determined their authenticity. Coming from a self-styled journalist who has admitted that he never sought to fact-check the  ACORN or Sherrod tapes, this is audacity verging on insanity.

Like the late Joe McCarthy, Breitbart smears both reflexively and with premeditation. And like McCarthy, he badly needs someone to show the public how he does his dirty work.

So here at last is an opportunity for the Times and all the other media outlets that aided and abetted the ACORN fraud to restore a minimum level of standards and honor. Investigate Breitbart, O’Keefe, Giles and the making and editing of the ACORN tapes without fear or favor -- then report the findings on page one.