Does Obama have the guts to make bank reform work?

The president got his bill passed. But it remains to be seen if the White House can really stand up to Wall Street 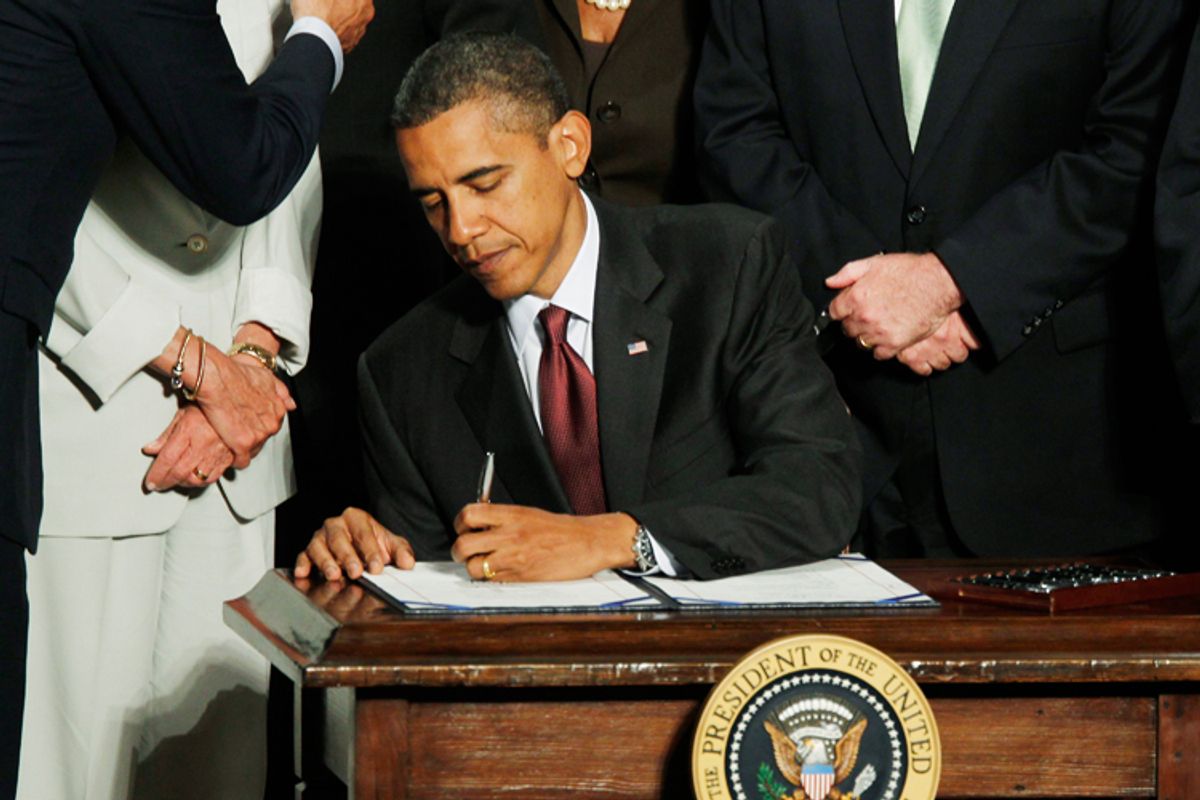 How delicious is this symbolism? President Barack Obama signed the Dodd-Frank bank reform bill into law Wednesday morning in front of an audience of around 400 people gathered in an auditorium in the Ronald Reagan Building, a few blocks from the White House. The Gipper must be spinning like a top. Reagan did more than any other modern politician to proselytize the view that government is the problem, not the answer. But with the signing of bank reform, Obama has now further solidified his position as the ideological antithesis to the Reagan "revolution."

There are many, many problems with the two signature legislative initiatives — health reform and bank reform — that will be the historic legacy of Obama's first two years in office. But there's no denying the underlying principle: Government should play an active role in ensuring the better welfare of citizens. Progressives are disappointed that Obama hasn't done more, but viewed against the trajectory that has been in place since the late 1970s, what's already been accomplished is impressive: Democratic presidents have been trying and failing to expand healthcare for Americans since Harry Truman. Wall Street has been progressively deregulated since at least the Carter administration. Now we have increased healthcare coverage and new rules for the financial sector.

It wasn't easy getting here. In his remarks, Obama was absolutely correct to observe that passing bank reform required overcoming "furious lobbying of powerful interest groups and a partisan minority determined to block change." There's a lot that Wall Street doesn't like in this bill (a fact that makes the hurt feelings of J.P. Morgan Chase CEO Jamie Dimon, who wasn't invited to the signing ceremony, all the more risible). There is, for example, the Consumer Financial Protection Bureau (CFPB) — the first government agency specifically mandated to defend Americans against financial rip-offs.

Obama made a point of emphasizing the bill's consumer-related provisions. He declared that the bill contains the "strongest consumer financial protections in history," and that his "new consumer watchdog" will "put a stop to a lot of the bad loans that fueled a debt bubble." Those are bold words, and the truth of them will only be discovered in the implementation of reform, not the letter of the law as currently written. How fast will the CFPB be established? Who will be chosen to run it? How aggressively will it roll into action? And how tough will the White House resist the inevitable backlash?

Signing the bill was the simple part — even if the cumbersome process of using different pens for each letter of his name sadly punctured any sense of ceremonial pomp and circumstance. But the jury is definitely still out on how vigorously this administration will live up to the spirit of the new rules. We have good reason to question the strength of the White House's backbone. The latest pathetic contretemps — the pusillanimous firing of USDA official Shirley Sherrod, before all the facts were known — might seem like a small thing compared to a couple of very big bills, but the symbolism is more than a little disquieting. If the White House can't stand up to the lies and political hackery of Andrew Breitbart, how can we trust it to resist Wall Street when it comes after the head of whoever Obama nominates as the head of his prized consumer watchdog?

"It was no easy task getting here," said the president, as he made his case for bank reform. But the hard stuff hasn't even begun.