Elizabeth Warren has all the right enemies

Conservatives and bankers can't stand the woman who is trying "to change everything." Are you listening, Obama? 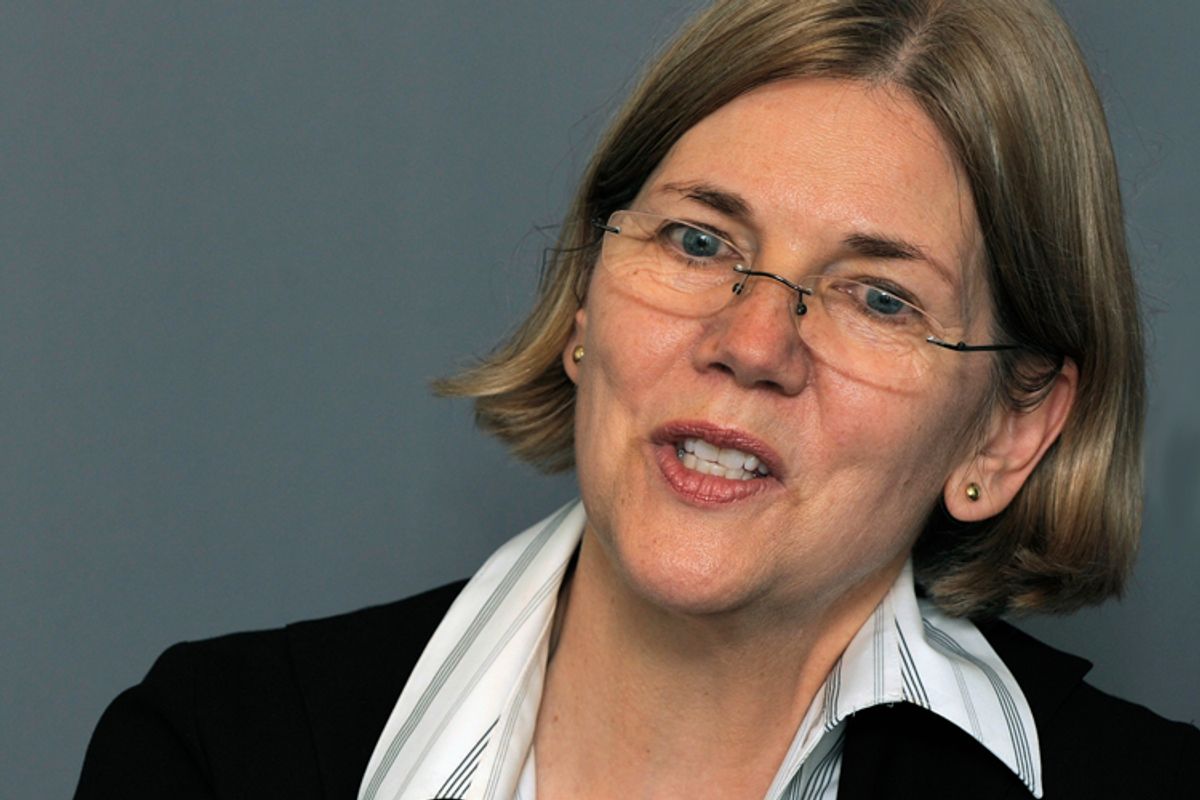 Now here's an example of some real crackerjack investigative reporting. Wall Street Journal reporter Damien Palleta has a scoop that will send bank reform Kremlinologists into a frenzy. On Tuesday night, Elizabeth Warren, the progressive choice to head the Consumer Financial Protection Bureau, had dinner with Supreme Court nominee Elena Kagan. And on Wednesday, right after attending the signing ceremony for the Dodd-Frank bill, Warren had lunch with Obama's trusted senior adviser, Valerie Jarrett.

What can it mean? Who wins in a Jarrett vs Geithner throw down? Is Elena Kagan offering tips on how to pass confirmation hearings with flying colors? Or is Warren operating a last-ditch lobbying effort to win over hearts and minds?

The chatter over Warren's prospects has grown into a full-on uproar in recent days, and now that bank reform is law, the clock is ticking.

I don't think Warren's chances are all that great -- too many Democratic senators have already expressed reservations. But I don't care. As far as I'm concerned, Warren has all the right enemies. Watch Alabama's Richard Shelby blast her, just this morning:

"Is she confirmable?" asks the interviewer.

"I would hope she's not confirmable," answers Shelby. "I would not support Elizabeth Warren. I would hope that a lot of Democrats and Republicans wouldn't do this. She's the guru, or one of them, dealing with behavioral science, trying to change everything. She was a big advocate of this, and now you're gonna give it to her? I would hope not."

It's news to me that Warren is a guru of "behavioral science" (I'm guessing Shelby really means "behavioral economics") but that's not really pertinent. The point is this: Shelby was opposed to the creation of an agency looking out for consumers in the first place. The thought of Warren in a position of real power in that agency is obviously very upsetting to him. Which, as far as I am concerned, is about as gold-plated an endorsement for why she's the right person for the job as we can get. . This uppity woman is trying to change everything! The horror!

The time is ripe to pick a political fight -- even if it's one that the White House can't win. The left is desperate for a reason to cheer for Obama -- especially after the Shirley Sherrod debacle. The troops need a pick-me-up. Man up, Mister President.