The heroism of Shirley Sherrod

Everyone is presumably aware by now of the facts surrounding the disgusting fraud perpetrated on Shirley Sherrod, engineered by Andrew Breitbart, amplified by Fox News, and meekly submitted to by the Obama administration.  Those who aren't can read excellent commentary from Jamelle Bouie, Joan Walsh, and Chris Martinez.  Much has been written about the incomparable sleaze of Breitbart, the standard propaganda boost from Fox News, and the typical cowardice of the administration in the face of such attacks.  All of that is well established by now and quite unsurprising, so I want to focus on what ought to be the enduring lesson from this ugly episode:  the courage of Shirley Sherrod. 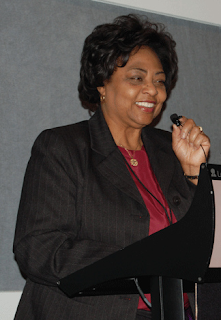 Just as CNN fired Octavia Nasr for one of the few insightful and interesting observations she ever voiced about the Middle East, Sherrod's speech -- which caused her to be fired -- is simply inspiring in its uncommon candor, courage and wisdom.  Few people are willing so publicly to confess to tribal biases and detail how they struggle to overcome them, even though that's a challenge which any person who evolves at some point must confront.  That process -- far more than the pretense of having always been bias-free -- requires difficult self-examination, and its public discussion offers vitally needed lessons for everyone.  Many people are unwilling ever to engage that process privately, let alone candidly describe it publicly.  Those with the courage to do so, like Sherrod, should be heralded for that candor.  Instead, she was slandered, falsely disparaged, and fired.

Contrary to the excuse being offered by those who did all of that, her actual message -- that she was plagued by racial biases decades ago and overcame them with the recognition that it is poverty that unites people in need -- was clearly evident even from the deceitfully edited Breitbart video.  This is part of what she said on that edited video:

That's when it was revealed to me that it's about poor versus those who have.  And not so much about white.   It is about white and black, but you know -- it opened my eyes.

But -- just as happened with Octavia Nasr and so many before her, including the now-destroyed ACORN -- the blinding, lying, depressingly common right-wing hysteria churned out by Brietbart/Fox meant that no nuances were permitted, no reason could breathe, and few people had the courage to defend Sherrod or even demand that she be allowed to speak before being thrown to the trash heap.

And that's where the truly significant and rare courage of Sherrod becomes so consequential.  Unlike so many who are caught in similar right-wing/media smear storms and (understandably) back down, Sherrod refused to meekly slink away.  She conspicuously refused to apologize for things that merited no apology.  Rather than legitimize the accusations with defensive self-justifications, she put the blame squarely where it belonged:  on Brietbart, on the NAACP for condemning her without all the facts, and on the Obama administration for demanding her "resignation."  And as a result of her refusal to allow these false smears to go unchallenged and the low-life smear artists to be rewarded, the true facts have emerged.  The actual culprits in this episode -- basically everyone except her and the white couple who came forward to defend her -- are clearly identified and exposed, with their credibility in tatters.  And it's hard to imagine the administration's not reversing itself and offering to re-hire her, thus being forced to reverse a serious injustice.

As much value as Sherrod's NAACP speech has for everyone, her conduct in the face of this massive onslaught is even more instructive.  It ought to serve as a template for how people respond to all of these low-life, right-wing smear campaigns:  with unapologetic clarity and resolve about who the actual wrongdoers are.  To the extent the gross injustice of her firing is reversed and the slander to which she was subjected is nullified, it will only be because she stood up to the right-wing smear machine, the establishment media, and even the Executive Branch, which were all jointly operating -- with different motives -- to destroy her.  That isn't easy to do, but this is obviously a woman with uncommon courage and principle -- exactly what is required to stand up to and expose the group of thuggish bullies trying to smear her and the cowardly government officials willing to play along.  This will be an extremely valuable episode if her conduct inspires future targets of such smears to respond with similar defiance.

UPDATE:  Numerous people have inquired about the prospects of Sherrod suing Breitbart and others responsible for how she was slandered.  My view on that question is here.

UPDATE II:  Here's Sherrod this morning explaining why she won't go on Fox News and what that "news outlet" is really up to.  They really picked the wrong victim this time.

UPDATE III:  White House Press Secretary Robert Gibbs and Agriculture Secretary Tom Vilsack did the right thing today, which was actually the only thing they could have done in light of the fraud that was exposed:  apologized to Sherrod and (in Vilsack's case) offered her job back to her.

Meanwhile, Shepard Smith, one of the very, very few people at Fox News with any inclination toward actual journalism, explained why he refused to show or even mention the edited Sherrod tape yesterday even when the rest of Fox was doing so non-stop:  because, among other things, he does not trust the "source" of the video (Breitbart) in light of his history.