More and more states are signing on to Obama's Race to the Top competition. For this parent, that's very bad news 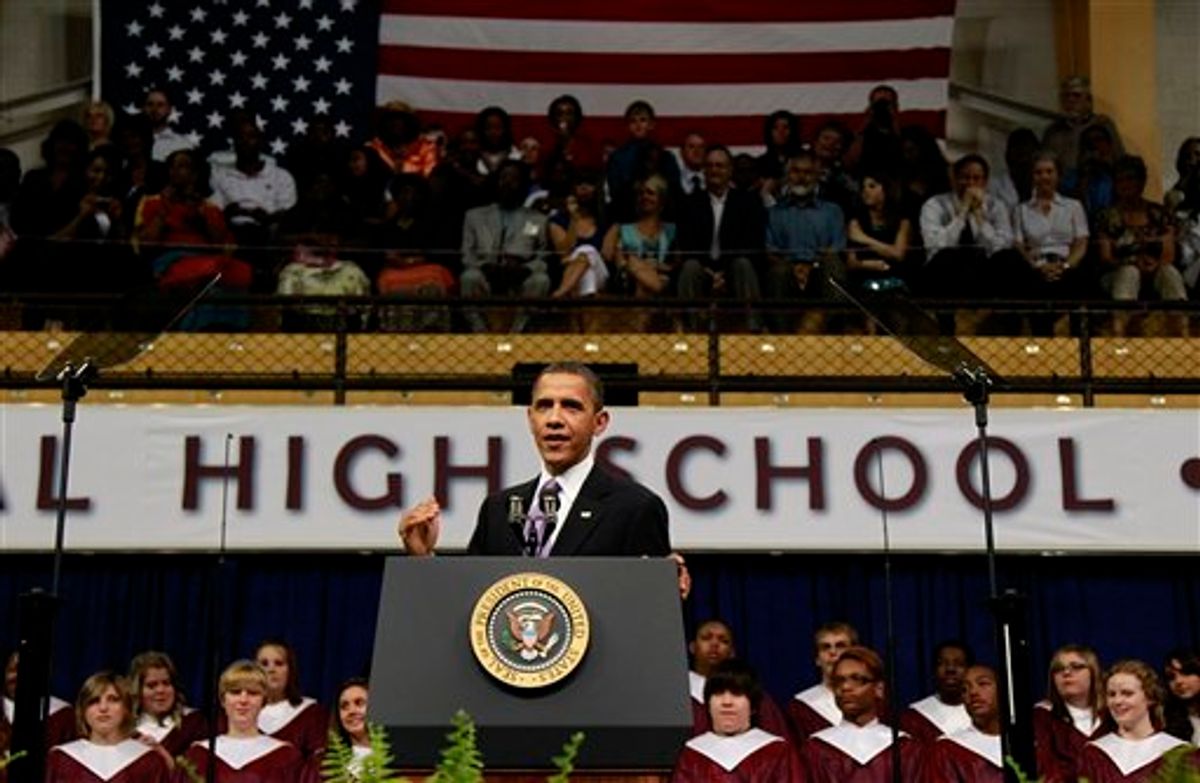 When it comes to our children's education, what so bad about standards? What's wrong with accountability? And when we consider the frequently grim, broke state of so many our public schools, what parent or teacher wouldn't be thrilled to grab a piece of the $3.4 billion the Obama administration will be lavishing on the school system in its "Race to the Top" competition, in which schools are rewarded for reaching the U.S. Department of Education's testing goals? Here's a bonus question — why, then, does everything about nationalizing our educational standards make me, a mother with two children in public school, want to throw up?

It's not as if states are having the choice to set their own curriculums wrested away from them, right? It's just that if they don't adopt the "Common Core Standards" set this spring by Aug. 2, they'll miss out on gaining points toward the Race to the Top — and the dollars that go with them. No wonder 27 states have already adopted the standards, and as the New York Times reports Wednesday, another dozen are expected to. So you can basically either get on board or watch your funding dry up considerably.

And as author Alfie Kohn eloquently writes in the Times' Room for Debate page Wednesday, "Uniformity isn’t the same thing as excellence; high standards don’t require common standards." What constitutes excellence and achievement is specific to each child. It's reassuring to look at numbers or letters and say whether a mark has been hit, but the data tells next to nothing about the individuals it represents.

That kids deserve guidelines, and that teachers deserve clear directives, is logical and fair. But what you'll find mentioned very little in the core standards are the devastating consequences for schools that don't measure up. As a sobering Times story last week illustrated, schools with low test scores now face the option of removing their leaders or closing altogether if they want to keep receiving funding — because scores ostensibly say so much more than actually assessing the culture of a school and its community. I know what a blatant disaster that strategy can be — two years ago, my own public school removed its principal after receiving a failing grade from the Department of Education. It replaced her with a successor who racked up a laundry list of complaints about his administrative competence from parents and the teachers' union before resigning in June.

If you're fortunate enough to live in a public school district that's well-funded, has a dedicated community that supplements it with donations and volunteerism, and a student body of kids with no language or learning problems, congratulations. If you happen to live, as my family does, in a low-income, predominantly immigrant area, full of children all across the learning spectrum, or if you send your kids to a school with a progressive, non-test-oriented philosophy, you might just be screwed. If you consider learning something that extends beyond what's on the math and English standards, accept that your kids are going to be spending more of their school days busily drilling for tests, because stuff like art and music and phys ed are just too hard to quantify. And if your dreams for your children are more than to "provide a clear and consistent framework to prepare for college and the workforce" so they can "compete successfully in the global economy" — like, say, fostering critical thought or a love of learning, do it on your own time.

Are there teachers and schools that are falling down on the job? Absolutely. Are there many others that are simply not landing within the narrow parameters set by people outside their own communities? Oh, you better believe it. And regardless, the consequence of not getting the Department of Education's highest stamp of approval shouldn't be to decimate a school in the hope that any change is a better one. Real educational reform takes effort and attention and the often grueling slog of persistent commitment. It means looking at your own students and striving for your own best practices. It is, in the words of Yeats, not the filling of a pail but the lighting of a fire. But it's a whole lot easier to measure what's in a bucket than to do right by a child.