The shocking new normalcy of the stay-at-home dad

Even in my blue-collar neighborhood, my parenting role is no big deal. Who said social change was always slow? 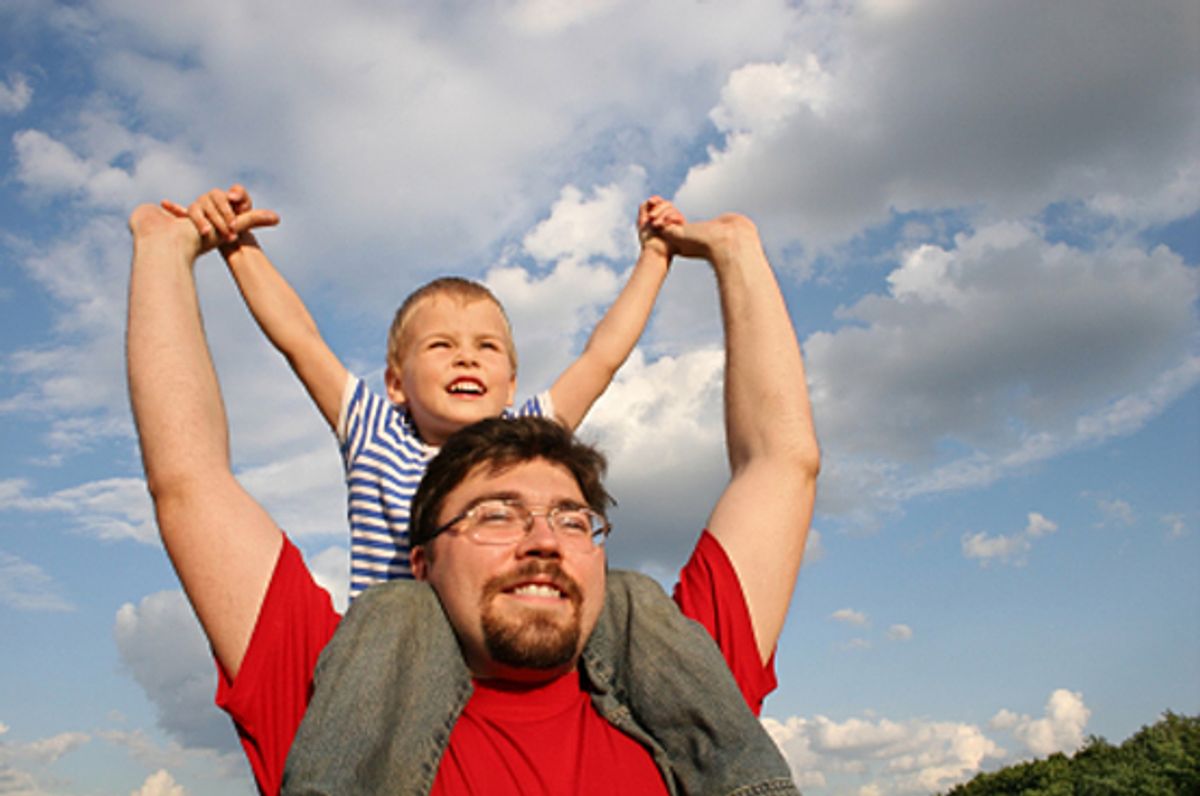 I was recently at the park with my kids when an elderly woman beckoned me over to the bench where she was sitting. My daughter sat happily stuffing dirt into her mouth while my son engaged in a "Toy Story"-themed wrestling match, so I figured it was OK if I pulled up a seat next to her. She told me she had seen me at the park before and she wanted to let me know that I was a "great dad."

My daughter spit a cigarette butt and bottle cap from between her mud-caked lips, and I decided to ignore the weepy cries of "To infinity and beyond!" as I turned my attention back to the old woman.

I was surprised to discover that she had been keeping tabs on me over the last year as I carted my kids around the neighborhood and spent my mornings with them at the park. Through her silent observation she had come to understand that my wife was the one who worked and I was the one who was at home with the kids.

It was creepy and flattering. She was like a little old Corey Hart wearing her sunglasses at night, except her sunglasses had a special prescription for her cataracts so she had to wear them all the time.

She further surprised me by talking about how happy it made her to see men finally realizing all the wonders of being an involved parent. She liked seeing so many dads at the park now. She thought the economy might have something to do with the number of men she'd begun to notice like me, but she hoped that we were learning an important lesson about how rewarding our lives could be when we became more focused on our family and less focused on a paycheck.

Then she told me about what a shame it was that "the blacks have ruined the local high school." Oh, dear.

I quickly excused myself by thanking her for her kind words (you know, the ones that weren't racist) and explained that I had to go remove a peach cobbler I was baking from the oven ... and replace it with my head. But I learned something valuable from Nana Gibson that day: While some prejudices harden into 90-year-old anger stones, while some social change is agonizing and takes decades, the old-fashioned vision of the man as breadwinner is surprisingly, almost shockingly, malleable.

I've spent the last three years as a stay-at-home dad in what I initially thought might be inhospitable territory. I don't live in the liberal bastions of SAHDism like Brooklyn or the Bay Area. I live in Philly, specifically a working-class neighborhood in Philly. My neighborhood is not known for its socially progressive attitudes or its gender bending. It's more like that movie "Copland." It's a place where police and firefighters settle down and have families. It's a place where there are more contractors than there are houses. It's a place where the churches are still filled on Sunday morning and the only place serving brunch afterward is the diner. And the waitresses don't call it "brunch" at the diner.

Sarah Palin might describe it as the "real America" if it weren't full of Reagan Democrats who still didn't pull the lever for a McCain-Palin ticket.

Part of me expected that a stay-at-home-dad in this socially conservative hotbed of testosterone would experience a life of isolation and disrespect, that I would accumulate a litany of grievances toward my closed-minded neighbors. After all, a quick Google search for stay-at-home dads reveals a world of support groups and rage at semantic inefficiency when it comes to dads as primary care providers (or PCPs if you need a handy acronym) and white-hot consumer fury at Big Diaper for dismissing our role in the home. From the information available on the Internet, someone might get the sense that SAHDs are a marginalized minority group, because the rest of the country isn't ready for our new style of manliness.

But that has not been my experience, nor has it been the experience of any of the other fathers I know who stay at home, or who play an equal or leading role in taking care of their kids. My neighbors have been just as encouraging and enthusiastic about this shift as my nonagenarian stalker from the park, luckily without the racism.

My neighborhood has seen the mills that used to support the entire community close and fall into disrepair (or get turned into condos). It's struggled with underemployment, temporary layoffs, downsizing and closings since the '70s, and everyone who lives here knows how easily unemployment can breed the double scourge of drugs and crime. So maybe people are just excited to see (relatively) young men who may not have jobs but still have direction. Perhaps they are rooting for us because they understand the alternatives. Perhaps they are rooting for us because they have found themselves in a similar situation.

But this acceptance goes far beyond the reaches of my neighborhood.

My wife's family is from Texas, and not the hippie parts either. They are conservative, they are traditionalists, they are Republican (or possibly Tea Partiers, I haven't checked recently), and they are avid fans of Fox News. Part of the reason I love them so much is that they broke every single one of my preconceived notions about what Fox News-loving potential Tea Party Texans are like by being so cool with how my wife and I raise our kids and structure our family. After reading an article about the different ways stay-at-home parents network, my mother-in-law bought me a set of business cards for my birthday. The cards read: "Aaron Traister — Stay at Home Father."

My wife is still making fun of me about those things.

Still, to find not simply acceptance but actual support for my newfangled role in an old-fashioned nuclear family spoke volumes to me about how expectations for men are changing.

And the larger world seems fairly on board with guys getting involved in childcare too. Ninety percent of the men's rooms I visit have a changing table (the other 10 percent are usually in adult bookstores). No one has told me I can't come to the park (at least when I'm sober). No one throws stuff at me or, I don't know, tells me my kind has ruined the local high school.

And while I take no joy in being target-marketed, I should point out that a number of advertisers are jumping on the whole "dads are the new cool moms" thing. There is the Toyota minivan campaign that features an irritating bald nerdy dad, a Huggies commercial with a baby peeing all over a handsome dad, an Oreo commercial about a kid eating cookies with an Internet dad, and a heartwarming Nike spot featuring a professional golfer and a posthumous dad.

To be sure there are holdouts, angry and anonymous Internet dog-men howling at the cybermoon, and cynical advertisers making limp-dick commercials that prey on the insecurities that men in the middle of this culture shift (like me) are inevitably dealing with, like those totally depressing Super Bowl commercials, but for the most part those voices are irrelevant. They sound like dinosaurs speaking after extinction. In the real world most people realize that you do what you do to get by, and then you move on.

Maybe I shouldn't be so surprised by this shift. Maybe I was just a spoiled prep school nimrod who was slow on the uptake. Maybe that's why even as a stay-at-home dad I felt compelled to make jokes about Bill Clinton's potential role as first gentlemen in 2008 while my "O'Reilly Factor"-loving father-in-law simply accepted Todd Palin for who he was.

We've read a lot of stories in the past few years about the crisis of men, like Hanna Rosin's recent "End of Men" article in the Atlantic. And it's true that the landscape of employment in this country has changed, probably forever. But I'm beginning to think that the recession isn't repainting the American landscape so much as it is putting the finishing touches on a canvas that's been in progress since before I was born. I was talking to my buddy Joe the other day, a man who votes by finding the Italian names on the ballot, a guy who has seen my neighborhood through good and bad. We were talking about my staying home with kids. "You guys have been around forever," he deadpanned. "It's just the world has changed, and people are more accepting of gays now."