The shame of right-wing "journalism"

Andrew Breitbart and Tucker Carlson distort facts to smear liberals, and it works. What liberals should learn 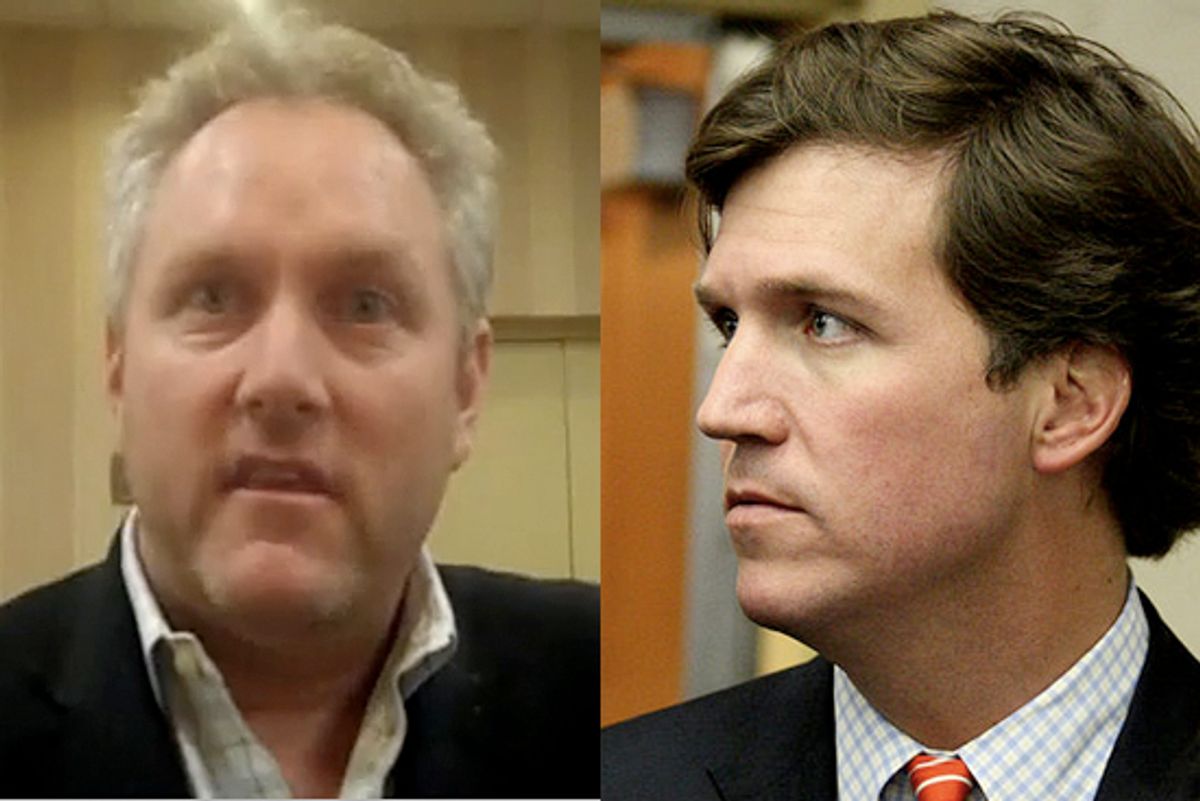 It pains me to pay attention to the work of the Daily Caller, Tucker Carlson's vanity project, as Carlson vies to compete with Andrew Breitbart on the right-wing "investigative journalism" frontier. What Carlson's "journalism" has in common with Breitbart's (besides being ethics-free) is blowing up stories that purport to "expose" the left with what are supposed to be the left's own words — except that later, it will turn out that "the left's own words" will have been hyped, manipulated and selectively edited, and that the story was baloney.

Today a big Breitbart "scoop" blew up in his angry face, when it was shown that the Big Journalism proprietor selectively edited a clip of an African-American USDA official seeming to admit she treated a white farmer poorly out of her own racial bias. It turns out that Shirley Sherrod was actually telling the story to show how the issue of race often obscures the issue of class, and the fact that poor black farmers and poor white farmers had a lot in common (eventually, she helped and became close to the white farmer and his family) — but Breitbart left all of that out of the video (just as he selectively and unfairly edited his cartoonish ACORN tapes).

Unbelievably, Agriculture Secretary Tom Vilsack fired Sherrod based on Breitbart's creative editing, which left out Sherrod's real point (and in fact, accused her of making the opposite point) and also made it seem as though she was talking about something she did while working for the USDA, when the experience in question took place 24 years ago, when she worked for a nonprofit. If Vilsack doesn't hire Sherrod back, I will personally contribute to her legal fund.

That's really all that happened. Or try this, if you want a little more detail: A handful of liberal opinion writers for openly liberal publications used the so-called Journolist to draft an open letter to ABC News, complaining about its moderation of an April 2008 debate between Hillary Clinton and Barack Obama (questions about Wright were only one issue raised in the open letter, which ran in the Nation, but I'll go back to that). Later on that same list, the Daily Caller "reveals," after Wright ran amok at the National Press Club and an NAACP event (and Obama had to denounce him), some of the same liberals argued that liberal media outlets should ignore the controversy and attack conservatives who raised it. Other liberals disagreed with them. End of story.

Or it should be, except the fact-challenged Sarah Palin has picked up her bullhorn to blast the Caller's "scoop" on Twitter: "Media Bias? What Media Bias? BOMBSHELL!" and to claim that it validated her complaints about the "lamestream media" on Facebook. (So far, she hasn't asked any specific media outlet to refudiate the story.) I anticipate coverage from big MSM outlets any minute now, given that the Washington Post's Andy Alexander and the New York Times' Bill Keller are already on record flagellating their news organizations for ignoring earlier right-wing scalp-taking stories about ACORN, Van Jones and New Black Panther Party.

Andy, Bill, other possibly cowed-by-the-right mainstream journalists? Save your resources for real stories, and let me break down the Caller scoop for you.

1) Although the Caller claims that "employees of news organizations including Time, Politico, the Huffington Post, the Baltimore Sun, the Guardian, Salon and the New Republic participated in outpourings of anger over how Obama had been treated in the media, and in some cases plotted to fix the damage" (emphasis mine), it only quotes a handful of people, and none of them are employed at anything other than liberal publications. (Thomas Schaller, credited with the idea for the open letter, is an author, a University of Maryland professor and an Op-Ed writer at the Baltimore Sun who periodically contributes to Salon, and more recently, 538.com.) The two people who come off as the most combative Obama zealots are Chris Hayes, who works at the Nation, and Spencer Ackerman, employed by the Washington Independent, both progressive publications. I assume if there had been any evidence that a mainstream media news reporter had colluded in the Journolist "plot" to defend Obama, he or she would have been outed immediately by the Caller. My sources say there weren't any.

2) In fact, the Journolist should have been named "the liberal economists, academics, foundation execs, PR folks, think tankers, pundits and other pals of Ezra Klein" list (the American Prospect blogger, now Washington Post blogger, convened Journolist). Although I was never on the list (more about that later) by all accounts of it I've heard, liberal opinion makers from the worlds of think tanks, academia and progressive punditry outnumbered mainstream media news reporters by dozens to one.

3) The Caller also falsely claims that later, when Wright showed himself to be not merely a guy who made some nasty anti-America and anti-white people comments, but a kook and a narcissist, and Obama denounced him, the Journolist plotted to "kill stories" about it and also to malign conservatives like Fred Barnes and Karl Rove who were trying to make Wright an issue as "racists" — and no one challenged those ideas, except on tactical grounds. In fact, if you read the story, you'll see that several people are quoted strongly disagreeing with the feverish suggestions of Hayes and Ackerman, on grounds that were moral and factual, not merely tactical. Hayes himself told the Caller, correctly: "I can say ‘hey I don’t think you guys should cover this,’ but no one listened to me."

4) Beyond the bounds of the Journolist, the Caller strives mightily to make the case that there was a generalized liberal media conspiracy to ignore the Wright issue — but I can tell you from personal experience, there was none. Just check the archives of Salon. It's true that there were a lot of Obama supporters who tried to argue the Wright story was less important than Obama's stance on Iraq and other issues. There were plenty of us who thought it was our job to pay attention to the Wright mess. (Read Joe Conason's take, here.) I raised questions about the anti-ABC letter at the time it was published. There was, and is, no party line among progressives.

Despite the hysterical headline, the Caller story has nothing to tell us about the "media." It does, however, have a little bit to remind us about the American progressive movement in 2008. I'd argue it might give the left some important rearview-mirror insight. I admit it: Reading the Caller story, and the way some individuals revered Obama, brought back a little bit of my PTSD as someone who defended Hillary Clinton from progressive attacks and questioned the reflexive anointing of Obama as the candidate of the left. The same Chris Hayes who the Caller says "castigated his fellow liberals for criticizing Wright" ("All this hand wringing about just how awful and odious Rev. Wright remarks are just keeps the hustle going. Our country disappears people. It tortures people. It has the blood of as many as one million Iraqi civilians — men, women, children, the infirmed — on its hands. You’ll forgive me if I just can’t quite dredge up the requisite amount of outrage over Barack Obama’s pastor,” Hayes wrote) now regularly castigates the predictably centrist Obama, including last night on MSNBC's "Countdown."

The Obama-worship of progressives like Hayes and many others on the Journolist, as commemorated by the Caller, set them up for a big fall, so that now they're often unrealistically critical of the president (I now get attacked for defending Obama too much. Let me also say: I like Hayes, and he's not the worst offender here.) It also contributed to Obama and his team feeling confident that they can neglect, even occasionally kick, his progressive base with impunity. Unfortunately, they never had to fight for it.

And while I don't think anyone on the Journolist directly took Ackerman's suggestion that they call people who raised the Wright issue "racist" — that happened all on its own — the way many on the left used the "racist" slur during the 2008 campaign was a mistake. As someone who confessed to being disturbed by Wright's worldview as it unfolded like a slow-motion train wreck in the spring of 2008, I was called "racist" so often the word lost its sting. I honestly believe that the wanton use of that terrible term to defend Obama is part of why today, when there is genuine racism against the president from the right and within the Tea Party, it's sometimes hard to get anyone to pay attention.

Ultimately, discussing racism brings us back to Andrew Breitbart's lies about Shirley Sherrod. It's a disgraceful story with no heroes — except Sherrod and the white farmers who came forward to support her, Roger and Eloise Spooner. Caught off-guard by the right-wing frenzy over its resolution asking Tea Partiers to condemn the racists in their midst, the NAACP overreacted, took Breitbart's word about Sherrod, and denounced her. (Ben Jealous has now, rightly, apologized.) Tom Vilsack fired her. The White House insists it didn't tell Vilsack to let Sherrod go — but it won't tell him to take her back, either.

So to wrap up: Idiotic and false charges of "racism" ultimately backfire to hurt a black woman and, perhaps, our black president, who really can't win here: If Obama is seen to be intervening to help a black woman get her job back, race baiters will have a field day (how fast will Rush Limbaugh say he responded to Sherrod's plight faster than the Gulf's). If he doesn't, he won't sleep well tonight. Watch this interview with the Spooners, below, and tell me who's the racist (hint: It's Andrew Breitbart).

Shirley Sherrod is right: A lot of people are spending a lot of energy to get folks like the Spooners and Sherrod to think they should be enemies, when the real issue is class. The left should remember that lesson, because the right is invested in making sure no one learns it.

Update: An earlier version of this piece attributed the idea of calling Wright foes "racist" to both Chris Hayes and Spencer Ackerman; none of Hayes's emails endorsed that idea, and I apologize. You can read his whole reply to this post here.