"God helped me see that its not just about black people, it's about poor people." And Breitbart called her a racist 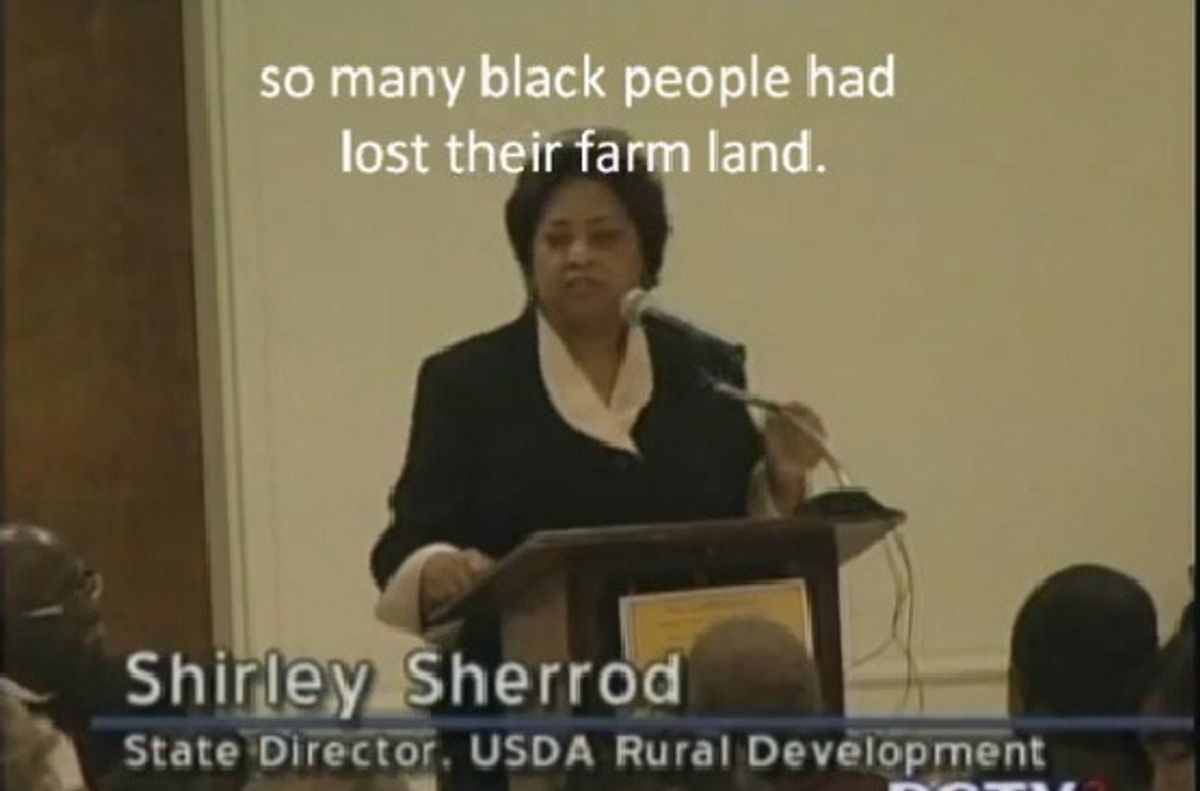 Digby has always been the conscience of the progresssive blogosphere. If you hang out there, you'll likely have run across a link with just three words: "What Digby said." Not surprisingly, Digby did one of the best posts on the Shirley Sherrod scandal late last night -- because she mainly just let the woman speak, in a post headlined "What Shirley Sherrod really said." I had watched extended clips of the video that the sad Andrew Breitbart edited to claim was "racist," but thanks to Digby (and Media Matters) I found the transcript of her speech to the NAACP Freedom Fund and read the whole thing -- and it floored me.

Shirley Sherrod isn't a victim, she's a hero, and she said in a few short paragraphs what I've been trying to say for my whole career. Here it is. (There are reports the USDA is reconsidering her firing, but nothing confirmed yet.)

For context, Breitbart ended his video beatdown of Sherrod with this quote:

"That's when it was revealed to me that y'all, it's about poor versus those who have, and not so much about white -- it is about white and black, but it's not -- you know, it opened my eyes, 'cause I took him to one of his own ..."

But here's the whole story.

... 'cause I took him to one of his own and I put him in his hands, and said, OK, I've done my job. But, during that time, we would have these injunctions against the Department of Agriculture and -- so, they couldn't foreclose on him. And I want you to know that the county supervisor had done something to him that I have not seen yet that they've done to any other farmer, black or white. And what they did to him caused him to not be able to file Chapter 12 bankruptcy.

So, everything was going along fine -- I'm thinking he's being taken care of by the white lawyer, then they lift the injunction against USDA in May of '87 for two weeks and he was one of 13 farmers in Georgia who received a foreclosure notice. He called me. I said, well, go on and make an appointment at the lawyer. Let me know when it is and I'll meet you there.

So we met at the lawyer's office on the day they had given him. And this lawyer sat there -- he had been paying this lawyer, y'all. That's what got me. He had been paying the lawyer since November, and this was May. And the lawyer sat there and looked at him and said, "Well, y'all are getting old. Why don't you just let the farm go?" I could not believe he said that, so I said to the lawyer -- I told him, I can't believe you said that. I said: It's obvious to me that he cannot file a Chapter 12 bankruptcy to stop this foreclose, you have to file an 11. And the lawyer said to me, I'll do whatever you say -- whatever you think -- that's the way he put it. But he's paying him. He wasn't paying me any money. You know, so he said -- the lawyer said he would work on it.

And then, about seven days before that man would have been sold at the courthouse steps, the farmer called me and said the lawyer wasn't doing anything. And that's when I spent time there in my office calling everybody I could think so to try to see -- help me find the lawyer who would handle this. And finally, I remembered that I had gone to see one just 40 miles away in Americus with the black farmers. So, I --

SHERROD: Well, working with him made me see that it's really about those who have versus those who don't.

I want to just share something with you and I think it helps to -- you know, when I learned this, I'm like, oh, my goodness. You know, back in the late 17th and 18th century, black -- there were black indentured servants and white indentured servants, and they all would work for seven years and get their freedom. And they didn't see any difference in each other -- nobody worried about skin color. They married each other. You know, these were poor whites and poor blacks in the same boat, except they were slaves, but they were both slaves and both had their opportunity to work out on the slavery.

So that's when they made black people servants for life. That's when the put laws in place forbidding them to marry each other. That's when they created the racism that we know of today. They did it to keep us divided. And they -- it started working so well, they said, gosh, looks like we've come up on something here that can last generations -- and here we are. Over 400 years later, and it's still working. What we have to do is get that out of our heads. There is no difference between us.

The only difference is that the folks with money want to stay in power and whether it's health care or whatever it is, they'll do what they need to do to keep that power.

[25:03] SHERROD: I couldn't say 45 years ago, I couldn't stand here and say what I'm saying -- what I will say to you tonight. Like I told, God helped me to see that its not just about black people, it's about poor people. And I've come a long way. I knew that I couldn't live with hate, you know. As my mother has said to so many, if we had tried to live with hate in our hearts, we'd probably be dead now.

But I've come to realize that we have to work together and -- you know, it's sad that we don't have a room full of white and blacks here tonight 'cause we have to overcome the divisions that we have. We have to get to the point as Toni Morrison said race exists but it doesn't matter. We have to work just as hard -- I know it's -- you know, that division is still here, but our communities are not going to thrive -- you know, our children won't have the communities that they need to be able to stay in and live in and have a good life if we can't figure this out, you all. White people, black people, Hispanic people, we all have to do our part to make our communities a safe place, a healthy place, a good environment.