A handful of conservative Democrats don't want to raise taxes on the wealthy. But this time, they aren't in control 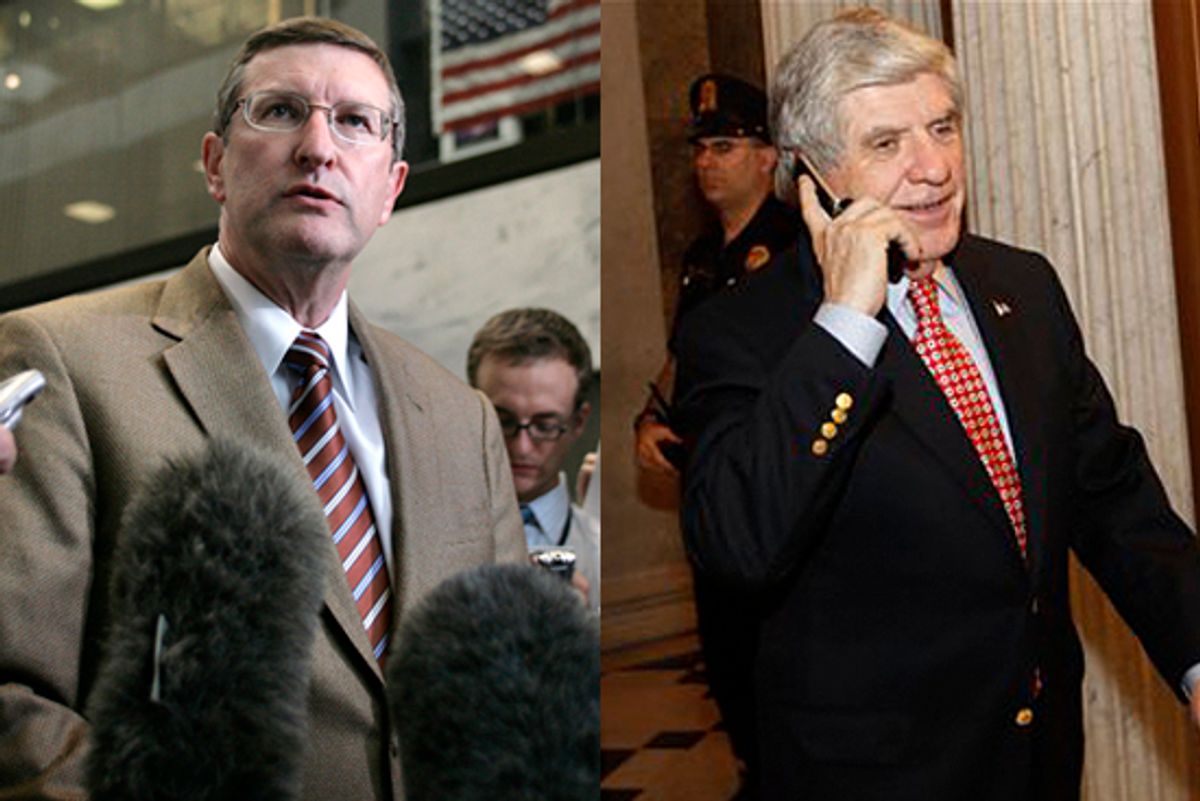 It is no surprise that when Republicans take a break from complaining about big budget deficits, they endorse big tax cuts that make deficits worse. We've come to count on that kind of hypocrisy. The 10-year-cost of the Bush tax cuts of 2001 and 2003, as a USA Today editorial helpfully points out, totals $2.3 trillion, or more "than Obama's stimulus, the war in Iraq and the 2003 Medicare drug benefit combined."

If no action is taken, those tax cuts will expire at the end of the year. The timing isn't particularly great -- a tax hike during a struggling economy works as an anti-stimulus, so there is at least some economic basis for caution. Until recently, Democrats seemed more or less united: Extend tax cuts for Americans earning under $250,000, and let them expire for the wealthy. Americans as a whole are enjoying the lowest tax burden since the administration of Harry Truman -- there's room to pick up some of the slack at the top end of the spectrum.

But now some conservative Democrats are joining with Republicans, and, citing the weak economy, are arguing that it is too soon to let tax cuts expire on the wealthy. Nebraska's Ben Nelson and North Dakota's Kent Conrad are the primary culprits.

Ben Nelson, of course, recently contributed to the impasse on extending unemployment benefits because of his concerns about adding to the deficit. It's hard to express in a polite manner just how dunderheaded his position is. Unemployment benefits get spent immediately by recipients -- it's one of the most efficient forms of bang-for-your-buck stimulus spending available. Tax cuts for the wealthy, in comparison, offer little immediate boost to the economy. So if your overriding concern is dealing with the deficit, but you are also worried about the economy, the obvious choice is to give aid to those who will spend, and raise taxes on those with cash to spare.

However, the most interesting thing about the tax cut debate is that, in this case, the usual suspects don't hold the same vise grip over the endgame as they did in the case of health reform or bank reform or unemployment benefits. If the Senate does nothing, all the tax cuts expire. Republicans are expected to filibuster any proposal that doesn't extend all the Bush tax cuts. But unless they can round up 20 Democrats that agree with them, they don't have the power to pass their own comprehensive tax extender, provided Democrats are willing to mount a filibuster of their own.

This would seem to mean that Democrats who want to raise taxes on the wealthy are sitting in a position of power. As Stan Collender explains, the Democrats could put some Republicans in a tough position in the run-up to the election by pointing out how their desire to keep taxes low on the richest Americans is preventing keeping a tax cut in place for the under-$250,000 cohort.

All signs point to a monster game of chicken, but the logic argues that a compromise will be reached. And this time, the senator from Nebraska doesn't hold all the cards.

UPDATE: The Wall Street Journal is reporting that Treasury Secretary Timothy Geithner made a definitive declaration at a breakfast with reporters this morning that the White House will allow tax cuts for the wealthy to expire at the end of the year. So much for the game of chicken!