Politico editor stands by comparison of Huffington Post to Breitbart 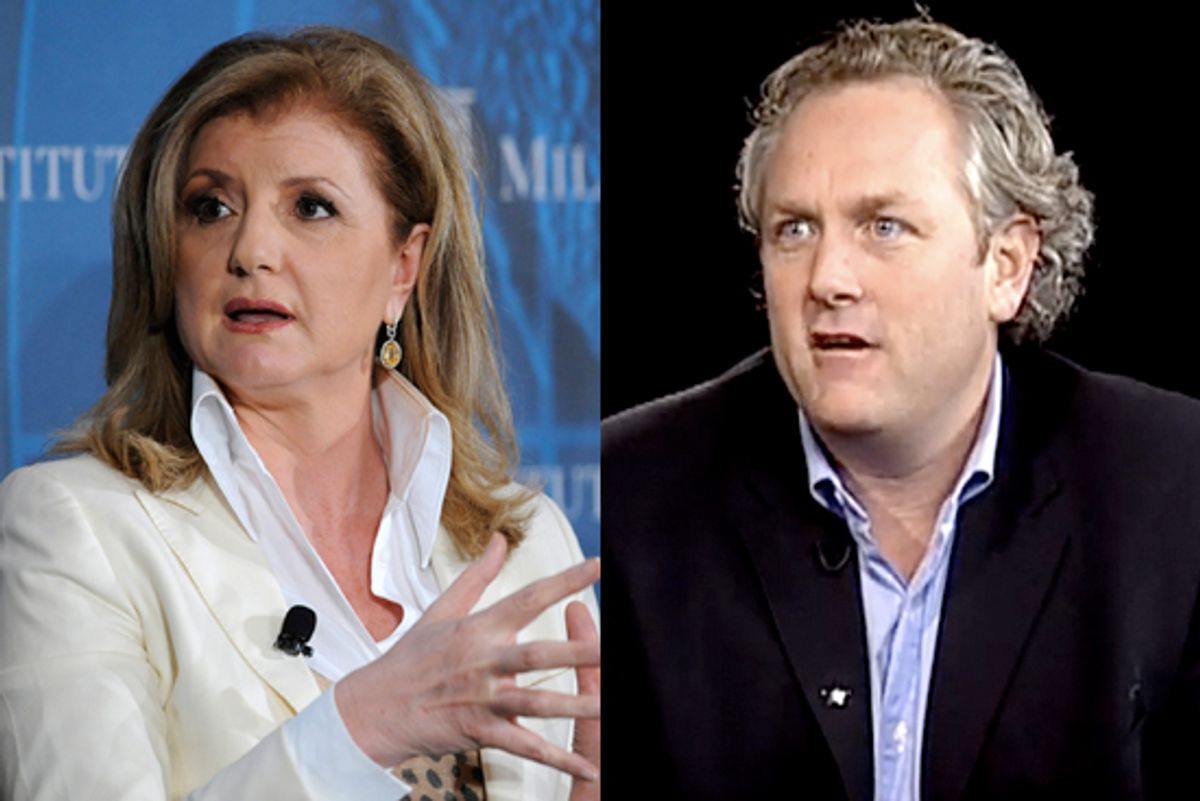 [UPDATED]Politico executive editor Jim VandeiHei said on the radio yesterday that the lesson of the Shirley Sherrod mess is that the "media-activist industrial complex" such as "Breitbart on the right or Huffington Post on the left" has "a huge incentive ... to engage in real tough combat, and to overreact."

That sounded a lot to us like VandeHei was equating Andrew Breitbart -- who posted an incendiary edited video, without having even seen the original and any due diligence or attempt at reporting it out -- and Huffington Post, which employs actual reporters who hew to journalistic standards. Yes, Huffington Post's stories sometimes flow from liberal premises and its reporters tend to be open about their ideological leanings. But HuffPo is fundamentally different from Breitbart, a hyper-partisan flamethrower who, as far as we can tell, does not employ any actual reporters. For example, he posted the deceptively edited Sherrod clip under the headline, "Video Proof: The NAACP Awards Racism–2010." (And he has refused to issue a correction since the full video was released.)

Asked about this, VandeHei told Salon in an e-mail

As you can see from my remark, my point was clear: partisan media outlets are growing, some at very rapid rates. I am not equating the two other than to say both are ideological and both are growing at impressive clips. Huffington Post clearly leans left, Breitbart clearly leans right. I am not saying this is good or bad – just a fact.

We followed up to ask VandeHei if he would acknowledge that Huffington Post -- which has respected beat reporters like Sam Stein and others -- has considerably higher journalistic standards than Breitbart (who arguably is not a journalist at all). Here's what he said:

I agree on Sam. I think he is a terrific reporter with very good sources, especially in Democratic circles. I also agree that Huffington Post has some reporters who are attacking stories much like we would: getting and reporting facts. We sometimes cite their work in Mike Allen’s Playbook or on our blogs. But, unlike us, HUFF has a number of people writing with partisan edge and an agenda, much like Breitbart does. I am not aware of any beat reporters working for Breitbart’s family of sites, though I could be wrong.

Here's the full quote of what he said on the radio Wednesday (audio here):

I think this one of those rare instances where everybody looks quite awful, to be honest -- the media, activists, NAACP , Breitbart, the Agriculture department -- everybody comes off looking bad, because there was an overreaction. I think it speaks to a much broader problem in the media-activist industrial complex, if you will, and I think it's a problem that's going to get worse: There's been this proliferation of partisan media -- whether it's MSNBC and Fox at night, or it's Breitbart on the right or Huffington Post on the left -- there's just a huge incentive for people to engage in real tough combat, and to overreact.

Vanderhei’s comparison is laughable. From releasing the “Bittergate” tape that nearly derailed Obama’s campaign, to the beyond left vs. right perspective we bring to covering issues such as the war in Afghanistan, Wall Street reform, and the influence of special interest money and lobbying on politicians on both sides of the aisle, it’s clear that HuffPost’s coverage is based on ferreting out the truth and a reverence for facts and fairness – not partisanship. This is yet another example of the kind of false equivalency so many in the media can’t seem to outgrow.