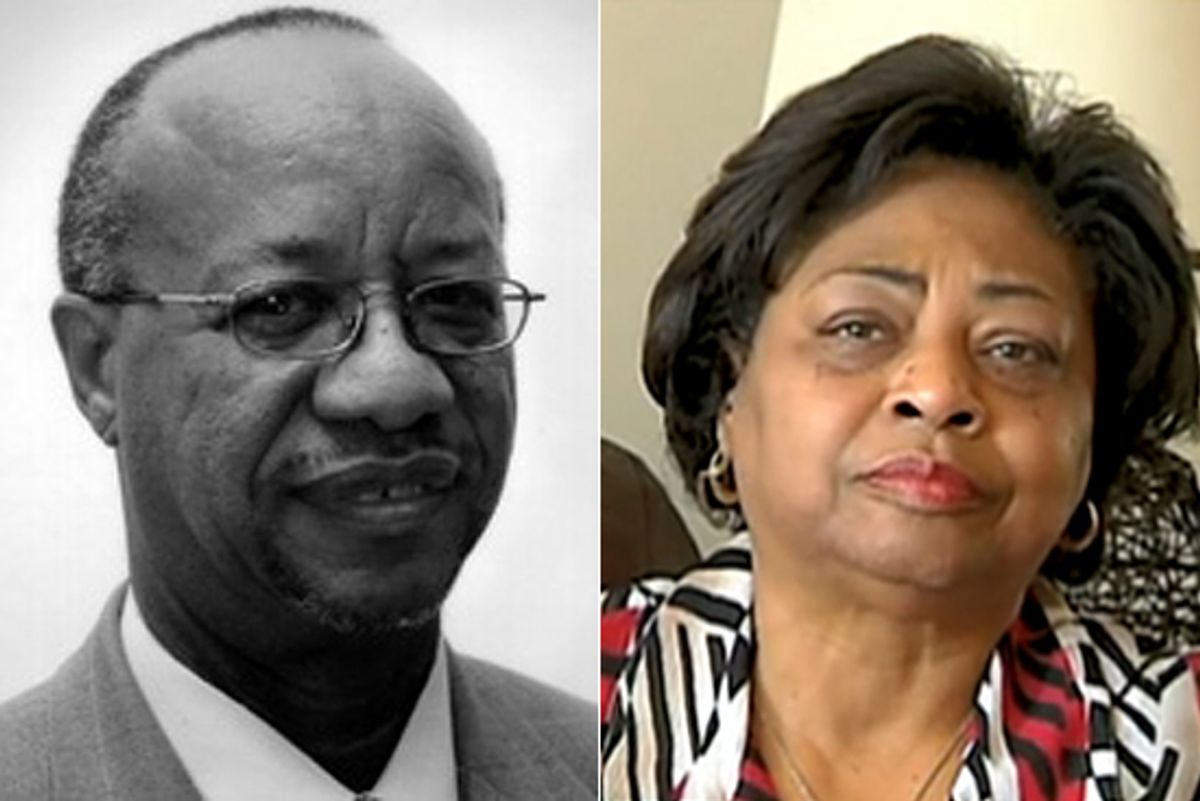 People who care about civil rights and racial reconciliation may eventually thank Andrew Breitbart for bringing Shirley Sherrod the global attention she deserves. Really. Her message of racial healing, her insight that the forces of wealth and injustice have always pit "the haves and the have-nots" against each other, whatever their race, is exactly what's missing in today's Beltway debates about race. What's even more amazing, but almost completely unexplored in this controversy, is the historic civil rights leadership role of her husband, Charles Sherrod, an early leader of the Student Nonviolent Coordinating Committee, who served on the front lines of the nonviolent civil rights movement in the early 1960s.

Despite Breitbart's attempt to cast Shirley Sherrod as The, um, Man ("The Woman" doesn't have the same ring), out to keep oppressed white folk down, under our first black racist president, she turned out to be the opposite, an advocate of justice for everybody. Given that history, it's fascinating to learn more about her husband, an early SNCC leader known for being willing to work with white volunteers even after tension developed over the role of whites in the organization. Charles Sherrod is important for much more than the fairness with which he treated whites, but given Breitbart's attempt to make his wife the poster woman for black "racism," that footnote to his leadership history is particularly noteworthy. If there's anyone more clueless about our civil rights history than Breitbart, as well as more abusive to it, I'm challenged to think of who it might be. He tests my commitment to nonviolent social change, but I'll share the work of Charles Sherrod to remember my values.

Sherrod was SNCC's first field secretary, and he co-founded the Albany movement after a student sit-in at the local bus station (to test a recently enacted desegregation law) led to a years-long campaign that ultimately involved Martin Luther King Jr. and the intervention of President John F. Kennedy. He traveled to the historic (and almost all-white) 1964 Democratic National Convention, when the Mississippi Freedom Democratic Party fought for more black representation. He was jailed several times and stayed with SNCC until 1966, when Stokely Carmichael became chair and whites were expelled, but he'd already become more focused on his work in southwest Georgia than SNCC politics. Sherrod got his doctor of divinity degree from New York's Union Theological Seminary, then returned to Albany to found the Southwest Georgia Independent Voters Project, then the agricultural cooperative New Communities Inc. He served 14 years on the Albany City Council, and he still lives there, known to civil rights movement veterans but obscure to the wider world, until his wife was attacked by the ignorant bullies of the right.

"We tend to think of civil rights workers as people who, it was an episode in their life before they went on and did something else," says Clayborne Carson, SNCC historian and director of the Martin Luther King Jr. Research and Education Institute at Stanford. "But Sherrod is an exemplar of those people who didn't leave the movement. They stayed, and they're still fighting, to this day." (I tried to reach Sherrod for this story, but not surprisingly, the voice-mail boxes I got to were full.)

I'm a little embarrassed I didn't immediately recognize Sherrod's name, because he's an important figure in one of my favorite books, "Parting the Waters," the first volume in Taylor Branch's majestic trilogy, "America in the King Years." Of course, I read it when it came out, about 21 years ago, and Sherrod is only mentioned twice in the final volume, "At Canaan's Edge," which I finished around the time of the Obama election. I lent out my copy of "Parting the Waters" and never got it back (if you have it, return it!), so I tracked down Taylor Branch himself, and rather unbelievably, he reached over to a bookshelf and read the most important sections about Sherrod, over the phone.

But first, I asked Branch to tell me why Sherrod was such an important figure in the early days of the modern civil rights movement.

"Well, you know, he's still alive," Branch noted, since I seemed to be speaking in the past tense. (I knew he was still living, because Jonathan Capehart wrote about meeting him Thursday morning, accompanying his wife to MSNBC, and then driving to an interview at CNN. But neither show interviewed Charles Sherrod; no one seems to have realized his history.) Branch and Sherrod saw each other back in April, at SNCC's 50th anniversary celebration.

"He's an amazingly humble, persistent, thoughtful, stubborn and brave individual," Branch said. "You know, I mention [Mississippi SNCC leader] Bob Moses about 100 times in the book, and I consider him a truly historical figure. But Sherrod is up there, he's mentioned about 20 times." Carson likewise compared Sherrod to Moses. "He's as central to the struggle for voting rights as Moses was; the difference is, the movement turning point wasn't southwest Georgia, it was Mississippi. History is strange that way."

I asked Branch what he remembered best about Sherrod. He chuckled and read me a passage from the book about the jailing of hundreds of Freedom Riders in Mississippi in 1961, and a meeting that Sherrod, SNCC leader Diane Nash, and others had with Attorney General Robert F. Kennedy, to ask for his help. The two young activists were unaware that Kennedy had already cut a deal with Mississippi Gov. Ross Barnett : If cops didn't beat up the protesters, the U.S. government would stay out of the way as they arrested them. As many as 600 Freedom Riders, most of them kids, were locked up in Parchman Penitentiary, Branch recalled, when Nash and Sherrod met with Kennedy and his assistant Burke Marshall.

Kennedy took the administration's line at the time: Why didn't the protesters drop their pesky Freedom Rides and get involved in voter registration — a constructive way to advance civil rights but also, of course, to register more Democrats. Sherrod exploded at Kennedy: "You are a public official, sir! It is not your job, before God or under the law, to tell us how to honor our constitutional rights. It's your job to protect us when we do." Branch laughed: "He does have a fiery side, but he was also, deeply, genuinely religious."

I was trying to find a neat morality tale match up between Shirley Sherrod's ultimate kindness to the white farmers she first resisted helping, and Charles Sherrod's role working with white volunteers in SNCC. Both Branch and Carson warned me about overstating that dimension of his story. "Sherrod would work with anybody," Branch said. "It's not right to say he went out of his way to work with white volunteers — but when they showed up in Atlanta, and people phoned around to find some place they could work, he'd take them." Reservations about working with whites weren't only about "black power," Branch noted. "They were a lot harder to supervise, and they stood out and could draw danger to themselves and other people." By the time of the big SNCC explosion that led to Carmichael's leadership and the expulsion of whites, "Sherrod was pretty far away from the ideological side. He's five years in Albany and caught up there," Branch says.

Still, it's worth noting that in one of the sadder internal battles of the civil rights movement, Sherrod was on the right side, standing up to heat for his use of white students in the Albany movement as early as 1964, according to Branch's "Pillar of Fire." The Sherrods are two for two: Given the chance to choose retaliation against whites and a kind of black separatism (which might even be understandable given the white racism they both endured growing up in the Jim Crow South), both chose to side with decency to white people.

Taylor Branch hopes the ugly treatment of Shirley Sherrod has the unintended positive consequence of "adding some context about a truly remarkable couple." Branch was sequestered in a Philadelphia library, researching his next book, and emerged to see headlines about some squabble over a USDA official. He read the story: "I said, 'Oh my God, it's Shirley Sherrod?' She is such a gem, and he is such a gem. We should really be listening to what she has to say."

Clay Carson agrees, but he couldn't resist voicing disappointment in President Obama for the administration's rapid dismissal of Shirley Sherrod before all the facts were in. "This is a symbol of something much larger: On civil liberties issues, he's just lost it. Nobody should ever be dismissed from a position for something they're saying on Fox. As a matter of principle, you don't fire someone without some kind of internal due process and investigation. But this is an administration that can order the assassination of an American citizen. It's disappointing, to say the least."

If I get a chance to talk to Charles Sherrod, I'll let him tell you what he thinks, in his own words, here.