Why would God hate a gathering of movie stars, nerds and Klingons? I talk to a protester from Westboro Baptist 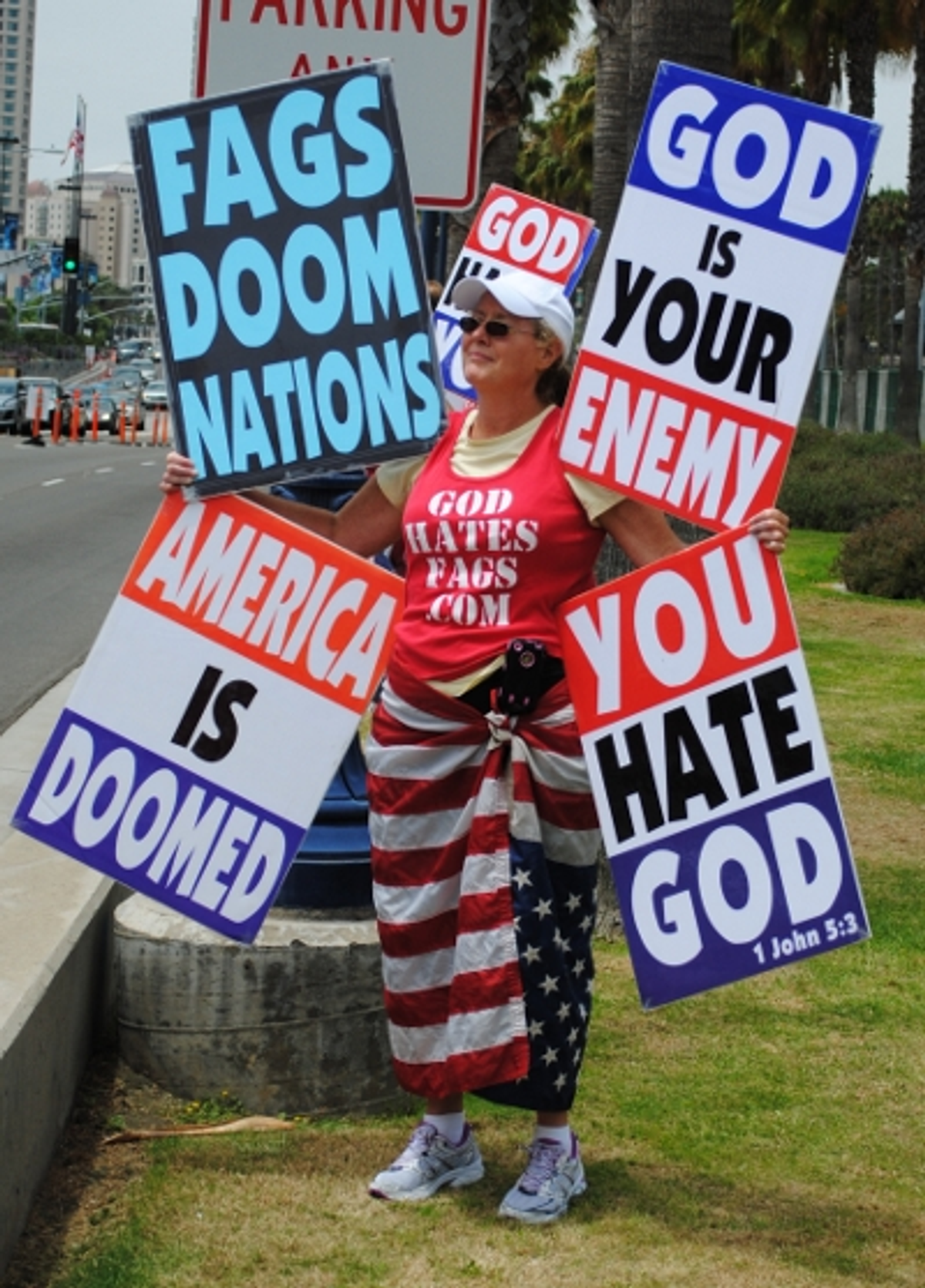 If Fred Phelps of the Westboro Baptist Church had his way, God would be sending biblical plagues down upon the San Diego Convention Center right about now and turning hundreds of nerds dressed in Batman costumes into pillars of salt.

It's the first full day of the San Diego Comic-Con. I was in front of the convention center, trying to cross the street against an unending tide of convention-goers carrying oversized bags stuffed with assorted plastic figurines and video games. As I made it to the crosswalk, I saw a man in a checkered shirt on the side of the road holding up a lime-green Day-Glo sign that read "GOD HATES KITTENS" with a picture of a cat pasted to it. I chuckled and snapped a couple of pictures of him. I'm taking a lot of pics at Comic-Con this year. Next to the man with the sign expressing the Lord's hatred of baby felines was a person dressed like Bender, the robot from "Futurama," holding up a sign that read "KILL ALL HUMANS!" I took some more pictures of the beginnings of a picket line bathed in satire.

I then saw a line of cops behind Bender the robot, and beyond them were the God Hates Fags people. Fred Phelps and his congregation from the Westboro Baptist Church took some time away from protesting the funerals of fallen soldiers to spend a little time waving their hateful placards in the general direction of Comic-Con and its annual mega-gathering of movie stars, geeks, nerds, Klingons, stormtroopers and multitudes of gals dressed in Princess Leia slave-girl outfits.

I walked past the line of San Diego police officers. "I'm press," I said. "I want to get some pictures of these people."

Once I got to the end of the concrete barrier, I snapped a couple of pictures of a woman who turned out to be Margie Phelps, the daughter of Fred Phelps. Her bottom half was wrapped in the American flag and she was holding up four signs at once, two in each hand. This gave her the illusion of more limbs, making her look like a strange pagan goddess of intolerance and hate. One sign said, "Fags doom nations" and another one read, "America is Doomed." All of their signs have the benefit of really good four-color printing. They take pride in these signs.

I asked her if she'd grant an interview, and she agreed. Still mindful of the police presence, I inched as closely to her as I could and held out my digital recorder and started asking questions. The transcript of this conversation is below for those that want to read it, but talking to Ms. Phelps was a little like arguing with a brick. I called her a fame whore, so there's some satisfaction in that, but I do wish that I thought of saying that her cup is filled with the filth of many nations. That would have been a biblical zinger there, but that wouldn't have brought a pillar of fire down from the heavens to destroy the Westboro Baptist Church.

As I was conducting my interview with Phelps, more Comic-Con attendees had gathered to form a counterprotest that started to outnumber the original protest. One guy in a Starfleet uniform held up a cardboard sign that said "God hates Jedi" on one side and "God Needs a Starship" on the other. Other counterprotesters held up signs that said, "Support fiction, read the Bible," and "Odin is God Read 'The Mighty Thor' #5." The Comic-Con goers also rallied themselves for a rousing chorus of Rick Astley's "Never Gonna Give You Up" making the whole thing seem a very serious, or "a very special," episode of "Glee."

But the best counterprotester was a man dressed like Jesus Christ who was carrying a sign that said, "God Loves Every Body." Sure, he separated the words "every" and "body," but that's still a lot closer to what the Bible says about the Almighty's preferences than anything written on the Phelps family's signs.

Here is the interview with Margie Phelps. For those of you who got through my interview with Andrew Breitbart, this should be a walk in the park, if only because it's much shorter...

So why are you out here at Comic-Con today?

Well, we're out here to say that if we were to invest one fraction of the resources that you spend and invest in worshiping Batman, and the Ghostbusters and Buffy the Vampire Slayer and so forth in reading the Bible and obeying God, this nation would not be [garbled].

You seem to be pretty knowledgeable. You threw out Buffy there.

We read the news. It's not hard to track what's going on in this country. This kind of convention would draw a lot more people than, for instance, a convention about obeying God.

So the Promise Keepers are worshiping false gods as well...

Of course they are. They are worshiping themselves, first and foremost. It's just another false religion.

So who are the real gods then?

You mean who are the real servants? There's only one God, and you know it and all mankind knows it. It's in your DNA. The Promise Keepers claim to worship the only true and living God, but instead they worship their works and self-righteousness and that's every bit as wrong as these foolish people worshiping Batman and all.

OK, Batman I understand, but why picket the soldiers' funerals?

Because the soldiers are dying for the sins of this nation, and the whole world is looking over at those events. They are big, splashy, patriotic pep rallies. We've picketed over 500 of them. They're great, big, giant public events. Why not picket them?

It's really tacky. These people are grieving. These families lost somebody.

At a cemetery? That's Main Street?

Number one, we don't picket cemeteries. We picket on public sidewalks, 30 minutes before the funeral, and we leave when it starts. Have you ever been there picketing? I have. I see what goes on.

But aren't you people just mugging for the cameras? You're here at Comic-Con. You're at Ronnie James Dio's funeral. Aren't you just being fame whores just like the whores of Babylon you purport are in there [pointing to the San Diego Convention Center]?

We're using any public forum available to get these words before the eyes and ears of doomed America. [Raising her voice] We are not claiming...

I think you're just fame whores like the people in there. [Note: Sylvester Stallone was in there somewhere].

And I don't care. Now going back to what sprung you off onto that side trail, we don't claim that we're privately mourning for our dead son. They do.

By their public actions. I don't care or know or care what they do in private. We don't speak to them in their private quarters. We speak to them when they come out on the public sidewalk. And that's what all of America is doing, bowing down to those dead bodies saying, "God Bless America" like a bunch of fools.

(NOTE: I'm sure we could have gone on like this all day, but I asked Phelps for her name and ended the interview after that one because the counterprotest was really heating up.)

Bob Calhoun is the author of the punk-wrestling memoir "Beer, Blood and Cornmeal: Seven Years of Incredibly Strange Wrestling" (ECW Press, 2008). He is currently working on a book about conventions, tradeshows and other gatherings. You can follow his convention adventures on Twitter at twitter.com/bob_calhoun.