Senate control could come down to Crist and Lieberman

If the numbers break a certain way, two free agent senators could cause chaos after the November elections 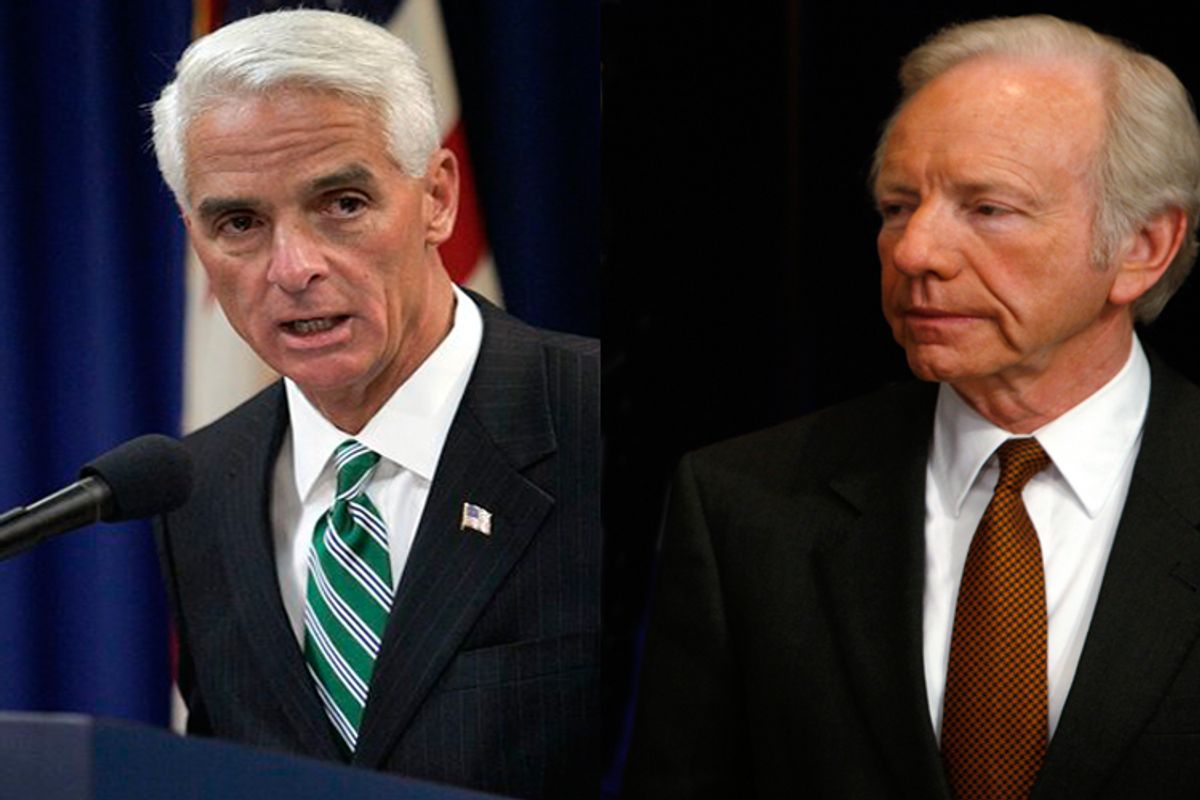 Election Day is November 2, but when it comes to control of the U.S. Senate, it may end up marking the start of the fight, not the end. If the outcomes of the key November 2 contests break a certain way, the chamber’s partisan balance will be determined by the loyalties of two free agents: Joe Lieberman and Charlie Crist.

The idea that Lieberman could play such a pivotal role is hardly new, of course. His decision following his 2006 reelection as an independent to caucus with the Democrats handed the party a Senate majority. And his not infrequent embrace of Republican talking points and candidates since then has served as a constant reminder that he might yet bolt for the GOP.

But Crist’s surprising endurance in his independent Senate candidacy in Florida -- an effort that was initially dismissed by most Beltway observers as a desperately lost cause -- has complicated the Senate outlook, increasing the chances that Election Day will not yield a clear majority party for the chamber.

Here’s how it could happen. Democrats now control 47 Senate seats that are either not on the ballot this fall or that are on the ballot but are considered safe for them. Republicans have 36. This week’s news that the GOP’s top prospect in West Virginia’s special election, Shelley Moore Capito, is not running is probably enough to move that state into the safe category for Democrats -- increasing the Democrats’ edge to 48-36. (Keep in mind, this counts Lieberman as a Democrat.)

Now, let’s look at what is in play this fall. Republicans are defending seats in Kentucky, Missouri, Ohio, New Hampshire and Florida. For the sake of argument, let’s say they win all of those contests – except Florida, where Crist wins. That would leave the Democrats with a 48-40-1 advantage. (Again, this is counting – for now – Lieberman as a Democrat.) Add in the four Democratic-held seats that the GOP is highly likely to claim -- North Dakota, Indiana, Arkansas and Delaware -- and the margin is reduced to 48-44-1.

That would bring us to the seven remaining races: in Pennsylvania, Illinois, Colorado, Nevada, California, Wisconsin and Washington. The first four of these essentially rate as toss-ups right now (although the identity of the GOP nominee in Colorado won’t be known until next month), while Democrats have a slight edge in the latter three. But for our purposes, let’s lump all seven of them together and consider the implications of a two different scenarios:

* If the GOP wins six of those seven races, the Senate balance would be 50-49 for the GOP, with Crist as an independent. Under this scenario, Democrats would need to convince Lieberman to stay put and woo Crist in order to create a 50-50 tie for Biden to break. In other words, either Crist or Lieberman would be able to deliver Republicans control of the chamber by siding with them.

So, if the GOP wins fewer than five of those seven toss-up/Democratic-leaning races, Crist and Lieberman won’t be crucial to determining Senate control. Nor will they be if the GOP wins all seven of those races, since Republicans would then have 51 seats without them (unless, of course, the GOP slips up somewhere else, like, say, Kentucky). But if Republicans wins five or six of those seven, then Crist and Lieberman will loom large.

Who would they side with? Certainly, the signs now point to Crist joining the Democrats. He’s been sounding many of the party’s themes in his campaign, and if he does win, he’ll owe it to Democratic defections. There’s also news of a recent phone conversation between Crist and Harry Reid, who may end up surviving in Nevada, and as the Democrats’ Senate leader.

But his thinking could change. Given his strategic imperatives in Florida right now, it’s in his interests to play footsie with Reid. But after the election, he might have more room to maneuver. And if the GOP is desperate for control, who knows what they might offer him? Plus, it’s still possible that Reid will lose his reelection bid in Nevada, and thus his Senate leadership perch, which could invalidate any informal arrangements that he and Crist might now have.

As for Lieberman, it’s hard to imagine him bolting for the GOP, if only because he’s held back despite having so many opportunities to do so for the last four years. Part of this, of course, is because top Democrats (like Barack Obama) have bent over backwards to accommodate him. If control of the chamber is on the line, they’d presumably make him yet another attractive offer.

But Lieberman will also have to consider his own reelection in Connecticut in 2012. Overall, his standing in the state is weak: a 40 percent job approval number, something that was enough to force Chris Dodd to abandon his own reelection effort earlier this year. What’s worse for Lieberman, though, is that his approval rating is significantly lower among Democrats (a negative 33-57 percent score) than among Republicans (a positive 51-42 percent score).

Realistically, to win reelection in ’12, Lieberman will have to either run as a Republican or form the kind of informal alliance with the GOP that he enjoyed in his ’06 campaign. In that context, swinging the Senate to the GOP this November would be a fine way to jump-start either effort.

That Lieberman could still haunt them like this four years after losing a primary in Connecticut surely irks many Democrats. There’s a chance -- not a very good one, but not a very remote one, either -- that Republicans will soon know the feeling.