Why has the Post series created so little reaction?

Living under a secret, unaccountable National Security State is now accepted as an inevitability

Remember how The Washington Post spent three days documenting on its front page that we basically live under a vast Secret Government -- composed of military and intelligence agencies and the largest corporations -- so sprawling and unaccountable that nobody even knows what it does?  This public/private Secret Government spies, detains, interrogates, and even wages wars in the dark, while sucking up untold hundreds of billions of dollars every year for the private corporations which run it.  Has any investigative series ever caused less of a ripple than this one?  After a one-day spate of television appearances for Dana Priest and William Arkin -- most of which predictably focused on the bureaucratic waste they raised along with whether the Post had Endangered the Nation by writing about all of this -- the story faded blissfully into the ether, never to be heard from again, easily subsumed by the Andrew Breitbart and Journolist sagas.

Any doubt about whether there'd be any meaningful (or even cosmetic) changes as a result of the Post exposé (it was really more a compilation of already known facts) was quickly dispelled by the reaction of the political class:  not just one of indifference, but outright contempt for the concerns raised by this story.  On Tuesday -- 24 hours after the first installment appeared -- the Senate's Homeland Security Intelligence Committee removed a provision from the Intelligence Authorization Act which would have provided some marginally greater oversight over the Government's secret intelligence programs, because Obama was threatening to veto any bill providing for such oversight.  Then, Obama's nominee to be the next Director of National Intelligence, Ret. Lt. Gen. James Clapper, all but laughed at the Post's work, dismissing it during his Senate confirmation hearing as "sensationalism," praising the bureaucratic redundancies as "competitive analysis," and insisting that the National Security and Surveillance State are perfectly "under control."  The Post's Jeff Stein today documents how Congressional Democrats can barely rouse themselves to the pretense that they intend to do anything to impose any restraints or accountability on Top Secret America.  And it was revealed this week by McClatchy that our vaunted "withdrawal of all combat troops from Iraq" will be accomplished only by assembling a privatized militia that will serve as the State Department's "army in Iraq" long after our actual army "withdraws."

Political elites don't even feel compelled to pretend to be able or willing to do anything about this.  Just think about this:  on Monday, the Post documents a vast Secret Government bequeathed with unimaginable secrecy and unaccountability, and the rest of the week is filled with stories of the administration's blocking greater oversight and plans to escalate the privitization of our National Security and Surveillance State.  That's why there was so little government angst over the Post's "revelations":  aside from the fact that it revealed little that wasn't already known (Priest and Arkin withheld substantial amounts of information at the Government's request), even the impact of having the Post trumpet these facts was not a threat to much of anything, since there's nobody in a position to do much about this even if they wanted to.  And few people seem to want to.

It's not hard to understand why.  Why would the political class possibly want to subvert or weaken their ability to exercise vast spying, detention, and military powers in the dark?  They don't.  Beyond that, as the Post series highlights, Top Secret America provides not only the ability to exercise vast power with no accountability, but also enables the transfer of massive amounts of public wealth to the private national security and surveillance corporations which own the Government.  Very few people with political power have the incentive to do anything about that.  It's probably best not to hold your breath waiting for Dianne Feinstein -- the Democratic Chairwoman of the Senate Intelligence Committee who lives in lavish wealth as a result of her husband's investments in the National Security State (and whose Senate career has a way of oh-so-coincidentally bolstering their wealth) -- to meaningfully address any of the issues raised by the Post series.  Despite Feinstein's rhetoric to the contrary, doing so is decidedly not in her interests for multiple reasons.

What ties together virtually every political issue is the one highlighted in this new article in The Nation by Vermont Sen. Bernie Sanders.  Entitled "No to Oligarchy," it documents with an array of facts how America's wealth is rapidly becoming more concentrated in a tiny number of families while the middle class essentially disappears.  As Sanders emphasizes, the outcome is not only the destruction of the "American dream," but serious threats to the very concept of a republican form of government:

Today, because of stagnating wages and higher costs for basic necessities, the average two-wage-earner family has less disposable income than a one-wage-earner family did a generation ago. The average American today is underpaid, overworked and stressed out as to what the future will bring for his or her children. For many, the American dream has become a nightmare.

But, not everybody is hurting. While the middle class disappears and poverty increases the wealthiest people in our country are not only doing extremely well, they are using their wealth and political power to protect and expand their very privileged status at the expense of everyone else. This upper-crust of extremely wealthy families are hell-bent on destroying the democratic vision of a strong middle-class which has made the United States the envy of the world. In its place they are determined to create an oligarchy in which a small number of families control the economic and political life of our country.

The 400 richest families in America, who saw their wealth increase by some $400 billion during the Bush years, have now accumulated $1.27 trillion in wealth. Four hundred families!  During the last fifteen years, while these enormously rich people became much richer their effective tax rates were slashed almost in half. While the highest-paid 400 Americans had an average income of $345 million in 2007, as a result of Bush tax policy they now pay an effective tax rate of 16.6 percent, the lowest on record.

Last year, the top twenty-five hedge fund managers made a combined $25 billion but because of tax policy their lobbyists helped write, they pay a lower effective tax rate than many teachers, nurses and police officers. As a result of tax havens in the Cayman Islands, Bermuda and elsewhere, the wealthy and large corporations are evading some $100 billion a year in U.S. taxes. . . .

But it's not just wealthy individuals who grotesquely manipulate the system for their benefit. It's the multinational corporations they own and control. In 2009, Exxon Mobil, the most profitable corporation in history made $19 billion in profits and not only paid no federal income tax—they actually received a $156 million refund from the government. In 2005, one out of every four large corporations in the United States paid no federal income taxes while earning $1.1 trillion in revenue.

The absence of effective state, and, especially, national restraint upon unfair money-getting has tended to create a small class of enormously wealthy and economically powerful men, whose chief object is to hold and increase their power. The prime need is to change the conditions which enable these men to accumulate power which is not for the general welfare that they should hold or exercise.

What was once a word that only the most UnSerious of people would utter as applied to the U.S. -- "oligarchy" -- is today one that can't be avoided if one wants accurately to describe our political culture.  Sanders warns of an "oligarchy in which a handful of wealthy and powerful families control the destiny of our nation."  The second-ranking Senate Democrat, Dick Durbin, extraordinarily confessed last year that it is Wall Street banks which "frankly own" the Congress. In virtually every area, the subservience of Government to large business interests is so complete that it's impossible to find the line where government ends and corporate power begins.  It's a full-scale merger.  That's the central fact of our political life.  Most everything else is a distraction.

That's why it's simultaneously so astounding and so unsurprising to watch the obscene spectacle unfold that is inevitably leading to cuts in Social Security.  In his New York Times column today, Paul Krugman accurately observes that Republicans are attempting to rehabilitate Bush because they are the same GOP with the same platform as prevailed throughout the last decade, just decorated with some re-branding.  That's all clearly true, but what isn't quite true is this paragraph:

In recent weeks, G.O.P. leaders have come out for a complete return to the Bush agenda, including tax breaks for the rich and financial deregulation. They've even resurrected the plan to cut future Social Security benefits.

It is absolutely beyond the Republicans' power to cut Social Security, even if they retake the House and Senate in November, since Obama will continue to wield veto power.  The real impetus for Social Security cuts is from the "Deficit Commission" which Obama created in January by Executive Order, then stacked with people (including its bipartisan co-Chairs) who have long favored slashing the program, and whose recommendations now enjoy the right of an up-or-down vote in Congress after the November election, thanks to the recent maneuvering by Nancy Pelosi.  The desire to cut Social Security is fully bipartisan (otherwise it couldn't happen) and pushed by the billionaire class that controls the Government.

The secret, omnipotent National Security State highlighted by The Washington Post will endure and expand as is because those who control the Government (or, as Dick Durbin put it, who "own" the Government) benefit endlessly from it.  Major scandals or citizen-infuriating crises can sometimes lead to some modest and easily circumvented restraints being placed on this power (as just happened with the recently enacted Financial Regulation bill), largely to placate public rage, but it's simply impossible to conceive of the political class taking any meaningful steps to rein in a limitlessly powerful and unquantifiably profitable National Security and Surveillance State -- at least in the absence of serious citizen revolts against it.  That Post series produced so little reaction because what it describes -- a Secret Government bestowed with the most extreme powers yet accountable to nobody -- is something to which the nation, as part of our State of Endless War, has apparently acquiesced as a permanent and tolerable condition.

UPDATE:  This is an extraordinary graph, showing the explosion in the rich-poor gap in the U.S. over the last 30 years, by illustrating what has happened to the average household income for the Top 1% versus those in the middle 60% and bottom 20% (h/t Matt Yglesias): 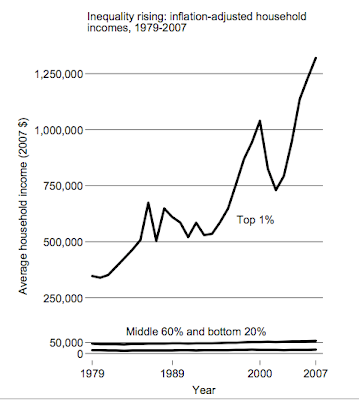 Relatedly, Sen. Feinstein's spokesman, Gil Duran, emailed me today to claim that my two sentences about her in this post contain "unfair, untrue and inaccurate accusations."  I've published the entire exchange here, and am content to allow everyone to assess the issues for themselves.  I will append to that post any further responses from Sen. Feinstein's office.