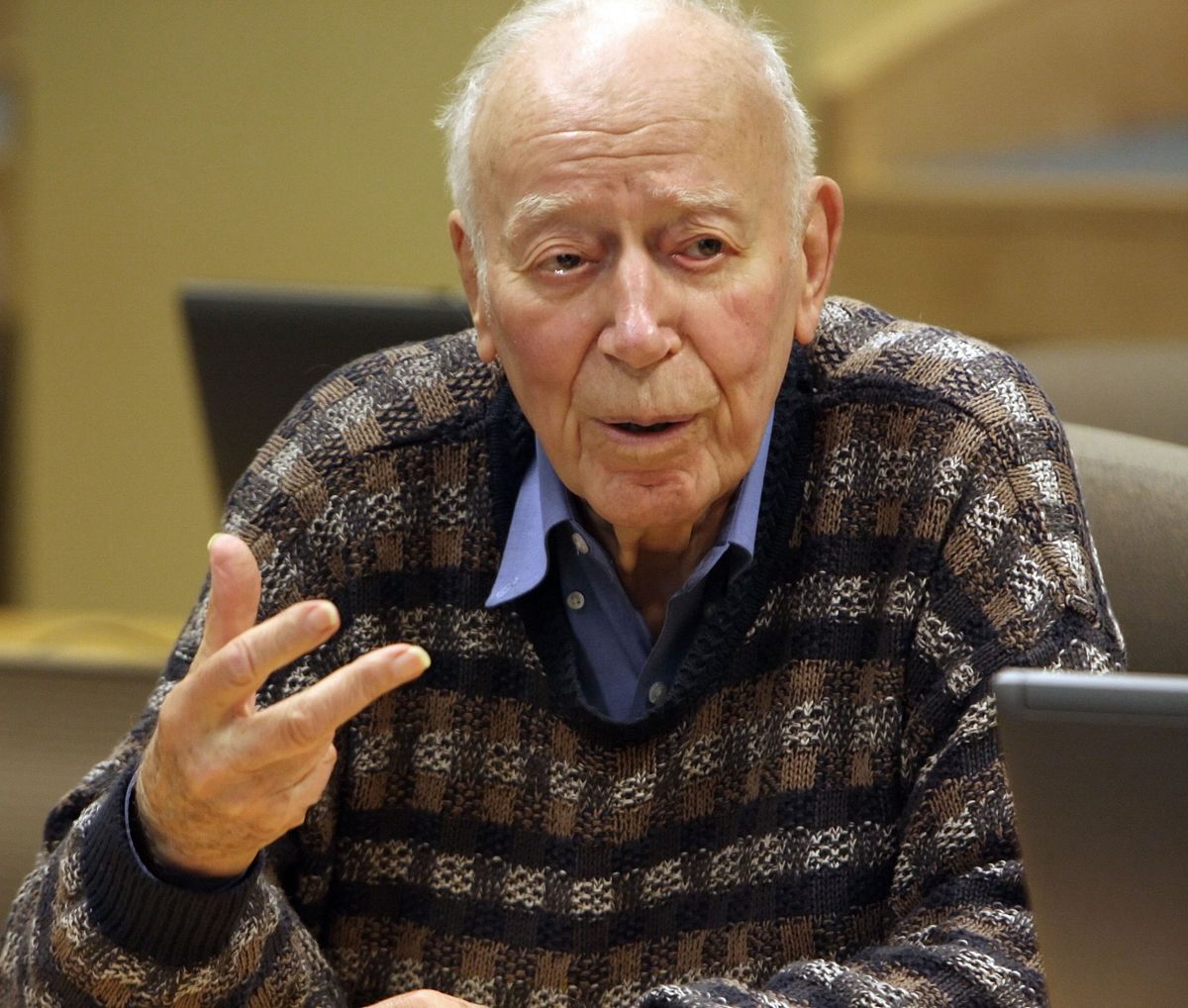 Former West Virginia congressman and secretary of state Ken Hechler discusses life experiences before watching an advance screening of the new documentary about his career in public office at the Marshall University Drinko Library on Thusday, April 3, 2008, in Huntington, W.Va. A premiere viewing of the two-hour documentary "Ken Hechler: In Pursuit of Justice," will take place in the Memorial Student Center's Don Morris Room on the campus of Marshall University on Saturday, April 5, 2008. (AP Photo/Mark Webb) (Mark Webb)
--

In his 95 years, Ken Hechler has recorded history from the front lines in World War II, debriefed Hitler’s top commanders before the Nuremberg Trials, advised Harry Truman, marched with Martin Luther King, published several books, been the subject of a documentary, and -- somewhere between all of this -- served nine terms in Congress and four as West Virginia's secretary of state.

Earlier this week, he unexpectedly jumped into the race to succeed the late Sen. Robert Byrd, who passed away in late June at the age of 92. Running against Gov. Joe Manchin in the Democratic primary, Hechler will be (to put it politely) a prohibitive underdog. He talked with Salon on Thursday about his latest campaign and his long life -- and even sang a few lines from a John Denver song.

You say that you aren't running anyone and that you want to use this race to raise awareness of mountaintop removal from strip mining. Why single out this issue?

I’m not really running for the Senate, I’m running to enable the people of West Virginia to register at the polls their opposition to this devastating practice, which hurts so many people in the valleys when they dump the rocks in the soil and all the things that they’re blasting out of the mountains into people’s front yards. Ruining the aquifers so that if they have water wells they run dry and also drying up the streams where people are fishing and using for recreation. And it’s a practice that is so vicious that it outta be abolished. Every time a poll is taken in West Virginia it’s two to one in favor of abolishing it but there’s never been an opportunity for people to put it on the ballot and so I’m saying every vote for Ken Hechler is a vote tantamount to opposition to mountaintop removal. That’s the only reason I’m in the campaign.

So your goal isn't to win?

The primary goal is not to win as much as it is to call attention to the issue and give people an opportunity to express their opinion on the ballot. That’s my primary aim.

How seriously should voters take your age into consideration?

You’ve been described as an enemy of “machine politics.” What does that mean to you?

I’m not only an enemy of “machine politics,” but I’m also an enemy of discrimination and an enemy of the devastation of God’s creation; the mountains of western Virginia. I’m an advocate of protecting the environment. West Virginia is called the mountain state according to the song by John Denver, "Country Roads," which starts (begins singing), "Almost heaven, West Virginia…" You don’t want them to say, “Almost level, West Virginia.”

Exactly. OK, a little bit about your personal history. You were drafted for World War II and ended up working as a combat historian. Can you explain importance of this kind of work?

Well, it’s very, very important not only to glorify the Army, but particularly to assemble lessons learned in combat for the purpose of educating the people at West Point and the service schools and the Commander General Staff Academy. That program was just getting off the ground when I went to Europe in the spring of 1944 and I helped to organize the administration of that program and to make sure that we covered all the strategic actions along the front lines. For example, I was about 10 miles away from the town of Remagen, between Cologne and Koblenz along the Rhine, when the electrifying news came in that we had captured the only bridge over the Rhine River that was still standing. The Germans waited until the last minute to destroy it because they wanted to retreat some of their big artillery and tanks towards the bridge so that we would capture that. It was a beginning of the end of the war, March 7, 1945, when that bridge was captured and war was over in Europe May 8, 1945. I wrote a book on it called “The Bridge of Remagen,” which was made into a full-length motion picture. The book sold 650,000 copies and, as I say, they made a movie out of it.

There was a film made about your life (2008's “Ken Hechler: The Pursuit of Justice”) and it singled out the need to “establish justice” as the core of your political philosophy. What does establishing justice mean to you?

It means that legislation has got to be fair to all the groups and as Thomas Jefferson once said, "Equal rights for all and special privileges for none." That is the root of my philosophy and it also motivated President Harry Truman when I was on the White House staff.

What threatens justice in the U.S. today?

Well, I think justice should involve the abolition of mountaintop removal and anything that discriminates against a group of people in this country.

You've spoken and written about your admiration for FDR's leadership during the Great Depression. How do you compare the current White House to his?

Well, I think the Obama administration is doing its best, and I applaud the fact that they were able to get healthcare approved but in terms of the environment I think perhaps they could do a little better in terms of taking leadership. They’re trying to create too much of a balance between the coal industry and it’s devastating many of our areas. I’d love to push them a little more in terms of protecting the environment.

You were the only member of Congress to march with Dr. Martin Luther King Jr. at Selma in 1965. Why did you do it -- and why didn't any of your colleagues?

I can’t answer the second part of your question, that’s up to the other people of Congress. I was on the Space Committee in Congress [we took] a group of U.S. senators down to Cape Canaveral to watch a space shot and I began to read about the billy clubs and tear gas, the beatings that those people like Dr. King … who were put in jail for disturbing the peace just because they were trying to carry out the 15th Amendment to the Constitution that guarantees the right to vote for all people of all races and creeds. The Ku Klux Klan was trying to prevent that from happening. I asked myself, "What is more important for me, as a teacher of government who believes in the principles of the Constitution and the Declaration of Independence, to head a junket to Cape Canaveral or to be down at the front lines of democracy in Selma, Alabama?" That was an easy choice.

Where are the front lines of democracy in the United States today?

Here again, I have been eager to be in the front lines of democracy when protesting mountaintop removal. One of the reasons I’m running this year for the U.S. Senate is to give people a voice to show on the ballot where they stand. That’s part of the front lines of democracy. I also believe in the public financing of elections, which Theodore Roosevelt initially stood for, for the federal government, which is now in existence in three states, Arizona, Maine, and Vermont, and hopefully we can get it extended to other states.

You were arrested rather recently, within the last couple years, for protesting mountaintop removal.

Will you travel your state as extensively in this campaign as you have in the past?

Well, I've got a lot of friends in West Virginia all over the state and I’m depending on them to help.