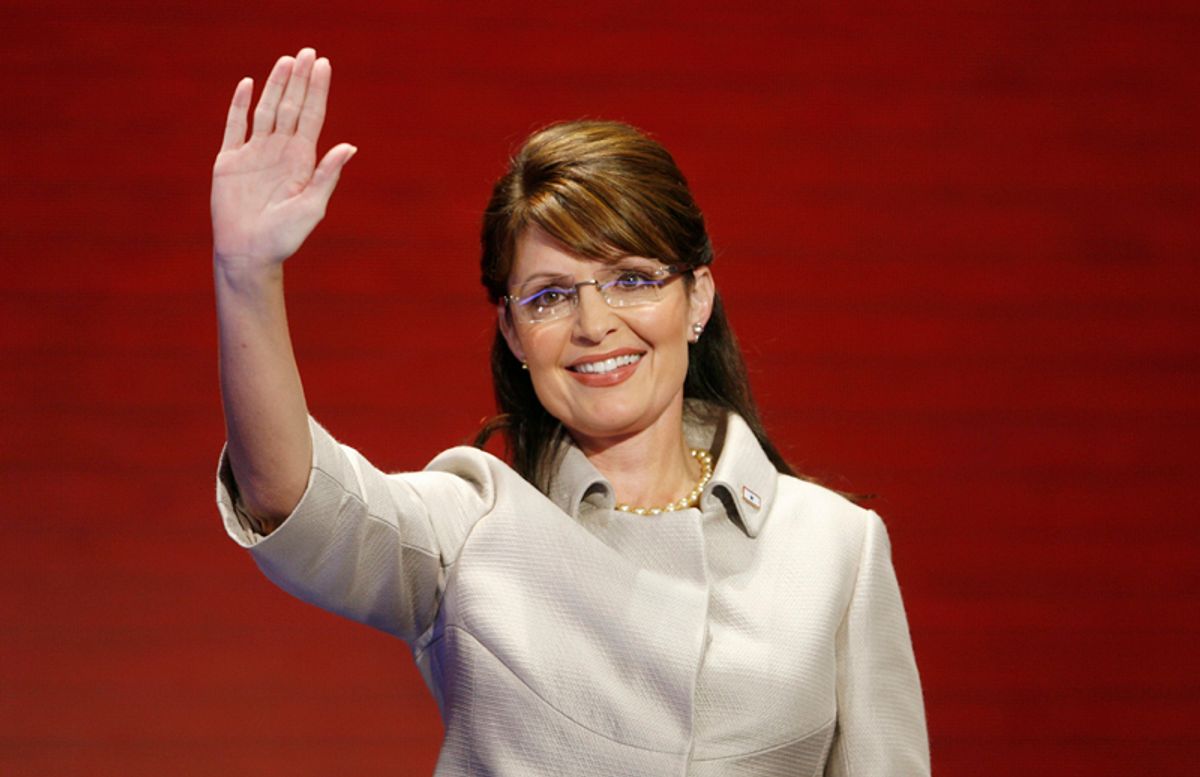 [Updated]You've probably noticed the recent surge in talk about a presidential run by Sarah Palin, much of it triggered by her stepped-up midterm campaign efforts and the professionalization of her political operation.

If she does run, there are some compelling reasons to believe she really could could win the GOP nomination and some very good reasons to doubt her chances. (There is also, as I've written, no reason to believe she could actually win a general election as the Republican nominee.) But on Hardball yesterday, Politico's Roger Simon, who just authored a column touting Palin's nomination prospects, made a truly bizarre case for why she'd be so formidable:

SIMON: And she's not like, in 2008, she genuinely came out of the wood work. Who is Sarah Palin?

SIMON: But you have to consider that she`s almost earned a spot by being --

SIMON: -- not even front-runner, but to earn a spot to run by being the vice presidential nominee last time.

Invoking "the Dan Quayle effect" really makes no sense, mostly because I'm not sure there is such a thing. Quayle, of course, was elected vice president in 1988 and, along with George H.W. Bush, was drummed out of office in 1992. He then declined to seek his party's open nomination for 1996, then briefly sought the 2000 GOP nomination, dropping out in 1999 after being swamped by George W. Bush in the endorsement/campaign cash game.

But Quayle, because he was so widely mocked (Jim Baker pushed for Bush to dump him from the '92 ticket), never emerged as the next-in-line choice. The honor, as noted above, went to Bob Dole in 1996. Moreover, the next-in-line candidate for 2012 is Mitt Romney, who finished second to John McCain in 2008.

It's also possible that Simon was just arguing that Palin's stint as the '08 V.P. nominee would make her a more credible candidate in '12 than if she'd never been picked. But again, how this relates to Quayle, who passed on his chance to run in '96, is unclear. Quayle, unlike Palin, actually served as V.P. So it would be better to compare Palin to past V.P. candidates from losing tickets -- like Geraldine Ferraro in 1984, Lloyd Bentsen in 1988, Jack Kemp in 1996, and John Edwards in 2004. And only one of them (Edwards) went on to run for president in the next election.

Bottom line: Yes, Palin owes her national celebrity to her V.P. candidacy in '08. But that that doesn't make her the GOP's "next in line" candidate, nor is there any reason to think it automatically makes her the frontrunner.

Update: Somehow I forgot about Joe-mentum! In my list of recent failed V.P. candidates, I didn't include Joe Lieberman, who ran for president in 2004 after serving as Al Gore's running-mate in 2000.