How Charlie Rangel can survive

For all of the uproar in Washington, he's in better shape than you'd think back home 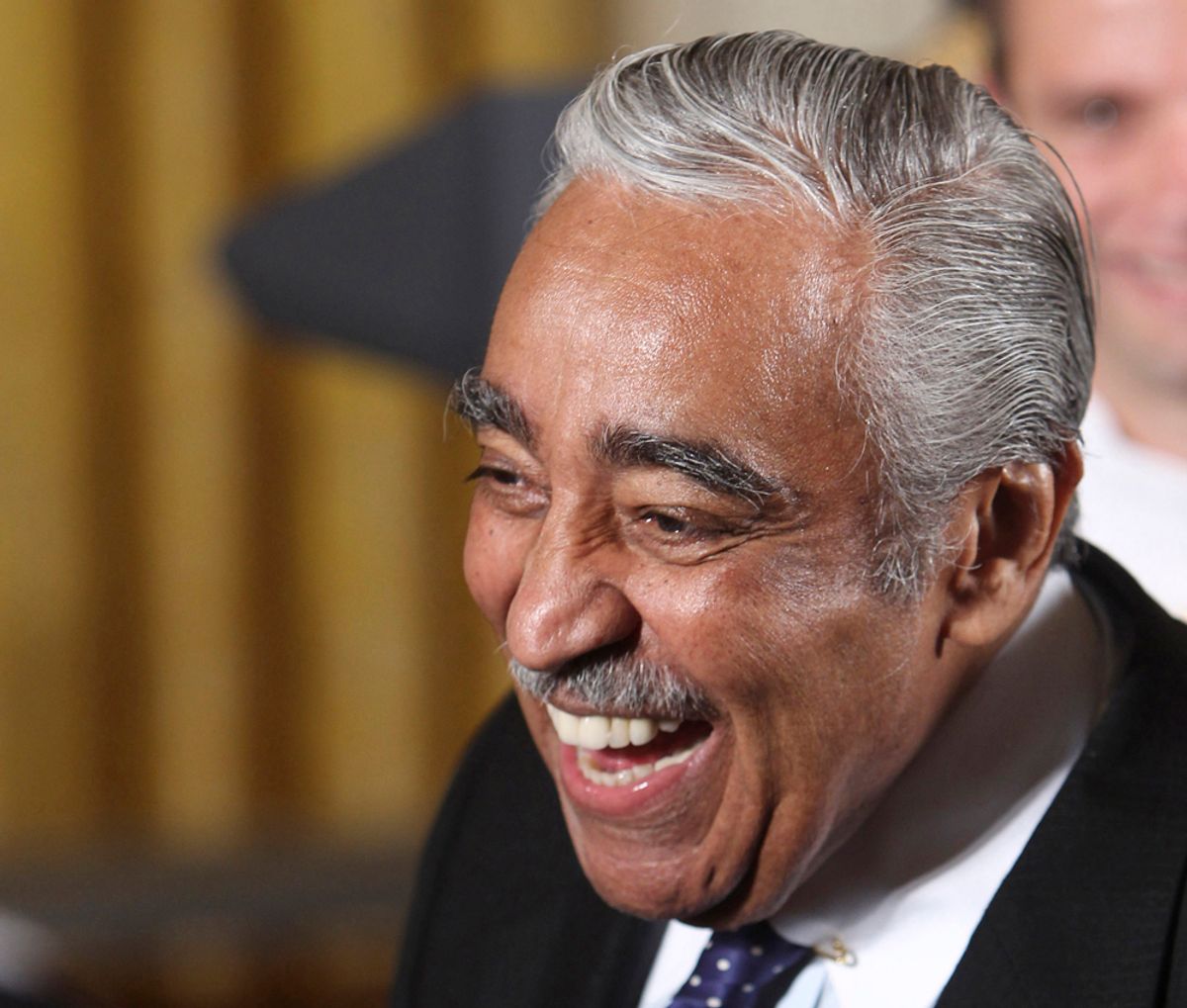 The fact that Charlie Rangel is set to be put on trial by members of the House ethics committee certainly suggests he's not long for Capitol Hill. After all, the last member to face such a proceeding -- Jim Traficant -- was subsequently expelled from the House (before being hauled off to prison by the feds).

But there was the 80-year-old Democrat early this afternoon, defiantly boasting to a room full of reporters that "I'm in the kitchen, and I'm not walking out." Strangely, his confidence may be well-placed.

No, he's not going to reclaim the Ways and Means committee gavel that he "temporarily" surrendered back in March. That's gone for good. But the expectation right now is that Rangel won't ultimately face expulsion, as Traficant did. The charges against him just aren't as serious -- which helps explain why there are reports that Rangel and the ethics committee nearly struck a deal last week in which the case would have been dropped in exchange for a public admission of guilt.

It's entirely possible, in fact, that a similar settlement will be reached between now and next week, when the trial is set to begin. That's certainly the preference of Rangel's fellow House Democrats, who don't want a trial -- which would take weeks, if not months -- to dominate headlines throughout the fall campaign season. And even if there's no settlement, Rangel is likely to either be reprimanded or censured -- not expelled.

That means that the only thing separating him from a 21st term in Congress may end up being the September 14 Democratic primary in his Harlem-based district. And while the poisonous headlines Rangel has faced for the last two years would easily kill the re-election hopes of most House members, he's fairly well-positioned to survive the primary (which, in the overwhelmingly Democratic 15th District, would be tantamount to winning the general election).

The are several reasons for this, including Rangel's money and his powerful allies in the district, plus whatever goodwill he's built up with his constituents through the years. But the biggest factor is the quality of the candidates running against him.

Right now, five candidates will appear on the primary ballot, and they are all decidedly B-list -- at best. Start with Rangel's chief challenger, Assemblyman Adam Clayton Powell IV. On paper, he's the perfect choice: His father, for whom a main artery running through the heart of Harlem is named, represented the district for years, before being ousted by Rangel in 1970. In fact, Powell tried to challenge Rangel once before, back in 1994, a race he lost by a two-to-one margin.

But Powell's life and political career has been troubled since then. Alex Pareene mentioned some of the highlights earlier:

Powell has been accused of more serious crimes. He was arrested for drunk driving ("I can't be drunk because I've eaten something," he told prosecutors) and accused of rape by two separate women in 2004. (He admitted to the sex -- in one case with a 19-year-old intern -- but insisted it was consensual and no charges were filed.)

I'd also throw in a lavish trip to Ireland in which Powell spent $1,200 in campaign funds and, as one paper put it, his "streak of inactivity" in Albany. Powell, in other words, is as flawed a candidate as Rangel. (Yes, his travails haven't received the same saturation coverage -- but Rangel has the money to make sure every voter in the district hears all about them.)

Besides Powell, there are three lesser-known candidates: Vincent Morgan, who once worked for Rangel; Joyce Johnson, who has waged losing campaigns for City Council and the state legislature; and Jonathan Tasini, who is best-known for his hopeless challenge to Hillary Clinton in a 2006 U.S. Senate primary. None of them have the resources to break through and win -- but all of them, taken together, have the potential to gobble up anti-Rangel votes that would otherwise go to Powell. Their presence lowers the bar for Rangel: He can probably survive with 40 to 45 percent of the vote.

There are some A-list Democrats in Harlem who could have given Rangel a serious run this year. But they all stayed out -- in part because of personal respect and appreciation for Rangel, but also out of fear that a losing campaign would hurt their status in the clubby world of Harlem politics. Keith Wright, an assemblyman from Harlem and the chairman of the Democratic Party in Manhattan, set the tone earlier this year, when he admitted that he aspires to run for Congress -- but only after Rangel decides to hang it up.

Of course, even if Rangel does win this year, he may not stick around DC for long. He'd be able to claim vindication -- "See, the voters believed in me!" -- but without his Ways and Means gavel, he'd be a backbencher on Capitol Hill. So Wright and all of the others who stayed away from this year's race may still get a chance at an open seat in two years.

But if just one of them had stepped up to the plate this year, Rangel might be in a lot more trouble back home than he now is.