Four of them, including three from Dallas, have put up 97 percent of the money for his new political operation 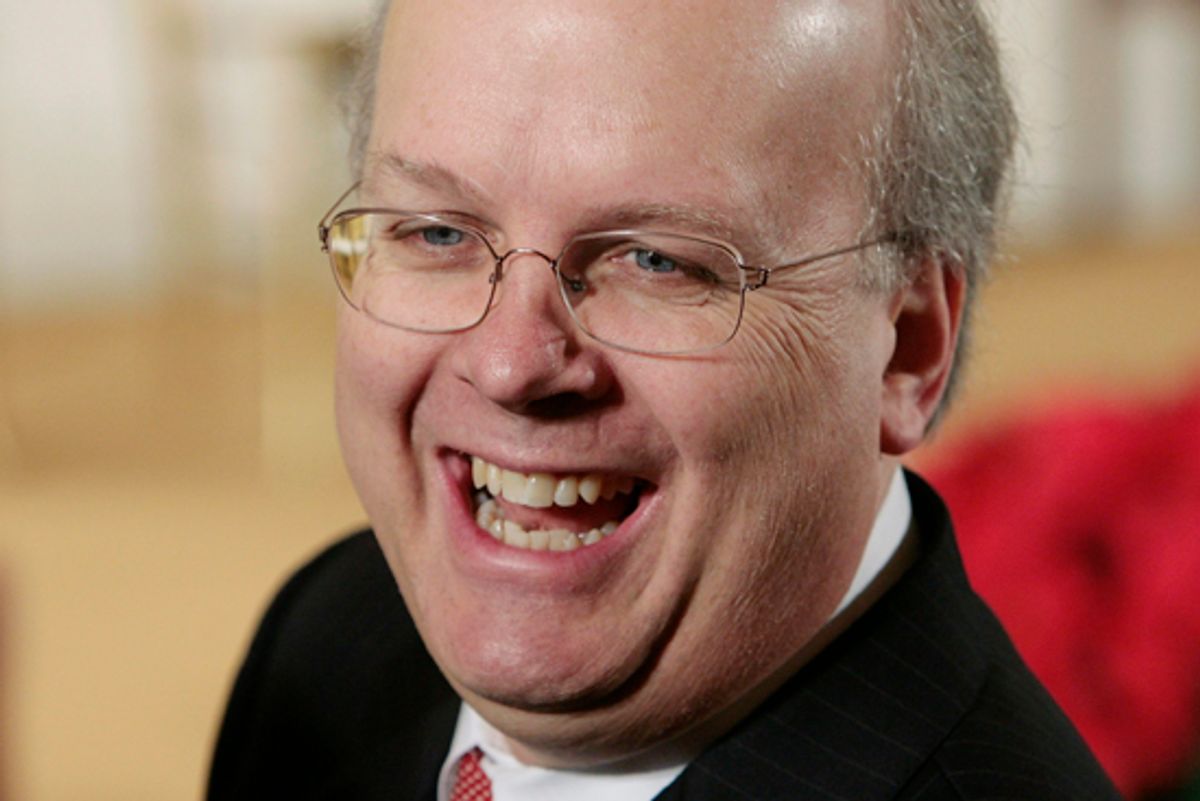 White House Deputy Chief of Staff Karl Rove laughs during a ceremony honoring the 2006 recipients of the Presidential Medal of Freedom in the East Room of the White House in Washington, December 15, 2006. REUTERS/Larry Downing (UNITED STATES) (Â© Larry Downing / Reuters)
--

[UPDATED]Virtually all of the $4.7 million raised by Karl Rove's new conservative outfit was contributed by just four billionaires, three of whom are based in Dallas, Texas, and two of whom made their fortune in the oil and gas industry.

The IRS filing of American Crossroads, an outside 527 group that was conceived by Rove and ex-RNC chair Ed Gillespie, gives a good taste of who is funding the GOP effort to make big gains in the House and Senate come the fall. The group has already burned through $600,000 on ads attacking Senate Majority Leader Harry Reid, who is facing a reelection contest against Republican Sharron Angle (see one of the spots below). Chaired by another ex-RNC chair, Mike Duncan, American Crossroads has pledged to raise $50 million to beat Democrats in the midterms and has been seen by some as a competitor to the Republican National Committee itself.

And despite the group's description of itself as "grassroots," Salon's review of its IRS filings show that four billionaires have contributed 97 percent of the $4.7 million it has raised to date. There are no limits on how much corporations, unions, and individuals can donate to 527 groups. Here's a guide to American Crossroads' four donors:

Here's one of American Crossroads' ads against Reid:

UPDATE: Jonathan Collegio, spokesman for American Crossroads, sent over this statement arguing that the group has the same fundraising model as liberal groups, but the "major difference is that, unlike unions, we can't tax our members to fund political activities."

Like many groups on the liberal side of the political spectrum, we receive support from large, small and online donors – and while we are barely four months old, our membership is expanding rapidly, with more than one thousand people engaged with our social media efforts. The major difference is that, unlike unions, we can't tax our members to fund political activities.