Are Obama's daughters too young to babysit? 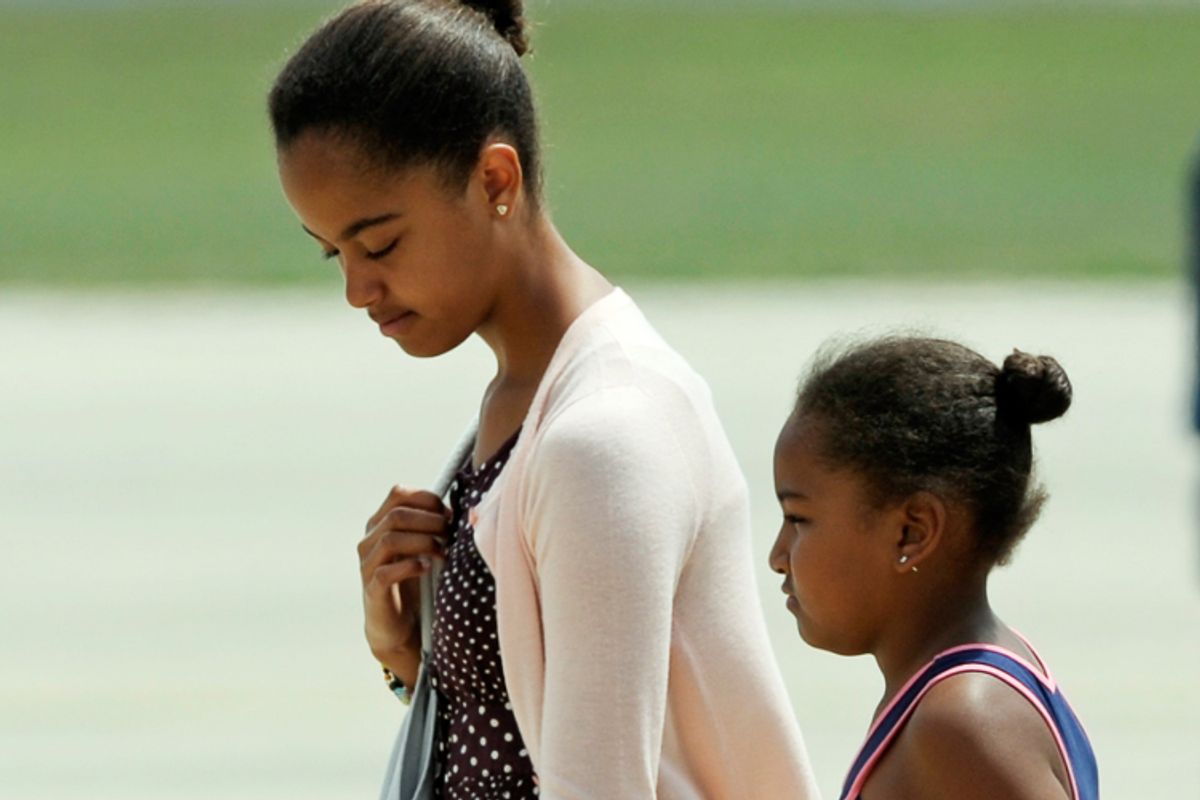 Live in the D.C. area and need somebody to watch your kids while you destroy America with your liberal social agenda? Two local girls may soon be available for your childcare needs. In an interview on "Good Morning America" Friday, Barack Obama told Elisabeth Leamy that he's teaching his kids financial management by giving them an allowance and their own bank accounts, and that "they're starting to get old enough where they may be able to earn some money babysitting." Arne Duncan, here's your chance to make some dinner reservations.

Though it would be fantastic to get a pair of sitters who come with their own security team, the likelihood of Sasha and Malia getting pelted with your own children's Cheerios is probably not an imminent scenario. It does however show the commander in chief's awareness of one of the great rites of parental passage — the time your child goes from someone who needs a babysitter to the day she is one. But at ages 9 and 12, should Sasha and Malia see that day anytime soon?

Babysitting, unlike drinking, driving or voting, doesn't have too many legally agreed-upon age limits. In Maryland, children are considered unsupervised unless they're "in the charge of a reliable person at least 13 years of age." And in Obama's former stomping ground, Illinois, the bar is set at 14. Everywhere else, it's pretty much fly by the seat of your pants.

That ambiguity reflects the reality that every sitter — and every set of circumstances — is different. My entrepreneurial firstborn, never one to let a moneymaking venture go unnoticed, started clamoring for childcare gigs the day we moved into an apartment building chock-full of young children. She was 6 at the time. Finally, four years later, she got her chance.

Last weekend, I went for what felt like the longest but was in fact the most expediently gulped-down meal of my life at the restaurant down the block, while my 10-year-old and her 6-year-old sister were on their own. As both the mother of the sitter and her client, I was reasonably freaked out the whole time. But when I came home, the little one was already curled up and fast asleep in bed, and her sitter was blissfully watching "Roman Holiday." The kitchen was not on fire, the beer wasn't gone from the back of the fridge, the Tylenol PM was not in anyone's stomach, and no pedophile they'd procured on Craigslist was beating a hasty path to our door. Honestly, I don't know what they did with the time the whole hour or so I was gone.

As a kid moves from sittee to sitter, there are almost too many nerve-racking algorithms to run. How many kids is she taking care of, and how old are they? How afraid is she of being alone? What are the duties of the job? How well do you know the family? What if your iPhone craps out and she's trying to reach you? You should probably call her, just to check. (I started babysitting regularly at 13, for a family that had a toddler and a baby, and though my 10-year-old did fine with her sister, it'll be a while yet before I'd farm her services out to another family.)

But babysitting doesn't just come with all the Fudgsicles and Sprite you can help yourself to — it's also tied to gender-role expectations. Why do we tell our daughters that their first paying job is inevitably in the deputy mom business? Is it because we're so worried that every boy is a potential child molester? That babysitting doesn't look as cool on a boy as a paper route? Or do we just assume girls want it more?

That said, I can't deny I loved my own time as a sitter, and the first thrill of rising to the challenge of someone else's trust. As a parent, there's always a part of you that sees in your child the baby you've been taking care of from before she was even born. Then one day, she tells you she wants to take care of someone else. So you take a deep breath, and you hope you've done an OK job showing her how. And you let her go.