Shrimp on Prozac are killing themselves

A study shows that drug traces in our waste can affect marine life behavior, but can crustaceans have feelings? 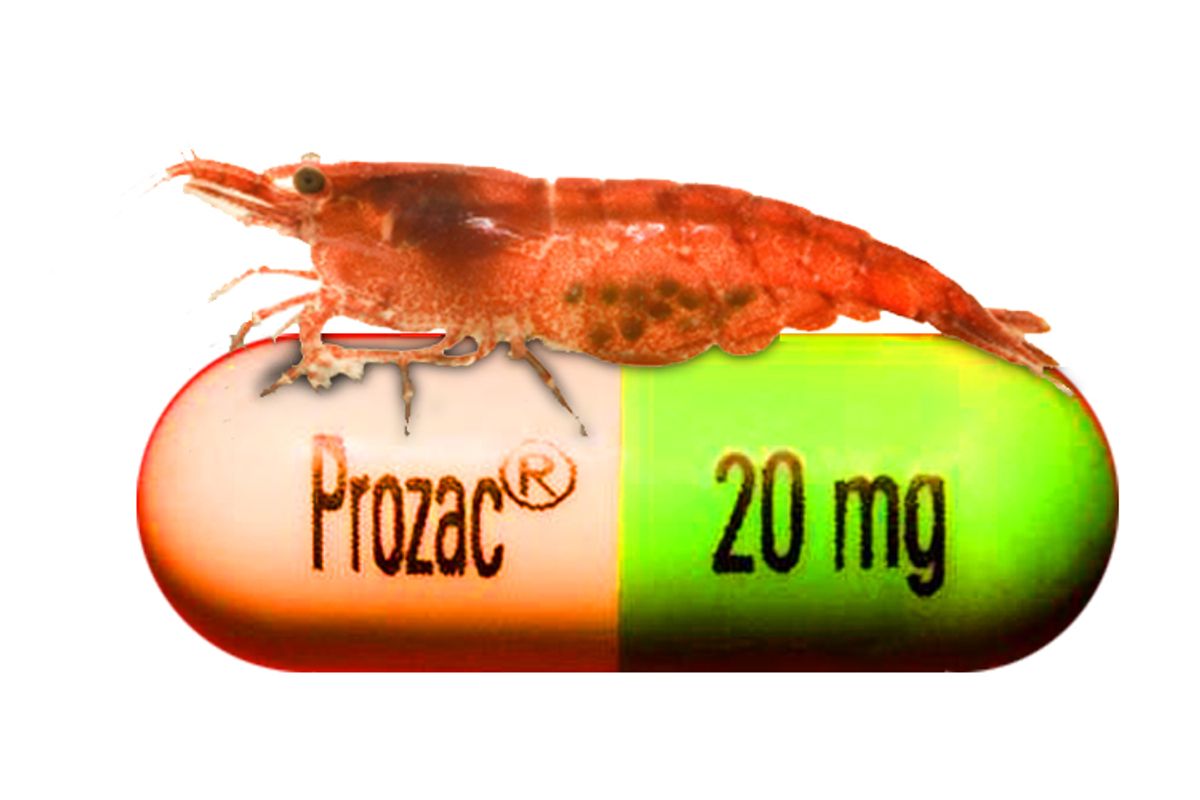 I have friends who are always talking about happy pigs and happy chickens — left to roam freely, eating real food instead of weird commercial food pellets, given the occasional backrub. But pity the poor shrimp! No one is raising happy shrimp ... on purpose anyway. But all the Prozac we've been taking may be doing the work for us, and marine biologists at the University of Portsmouth in the U.K. have found that enough of the drug passes through our bodies directly into the wastewater to seriously change the behavior of shrimp who swim in it: They're killing themselves. But do shrimp even have emotions?

Shrimp are a shy and retiring lot, living in shadows and dark crevices to hide from predators (and nurse their psychic scars?). But when they're swimming in concentrations of Prozac (or, more specifically, the chemical fluoxetine) as those found in the water around some urban areas, they become five times as likely to swim toward light, making them easy prey. And sadly, pollutants from urban runoff are in highest concentration in river estuaries and right near the coast ... which is where shrimp tend to live. Aside from the tragic irony, if shrimp populations start to collapse, it could have a serious effect on the established balance of the food chain. And most wastewater treatment plants aren't geared toward removing residual drugs from the water. (A few years ago, scientists found fish changing sexes because of contraceptives and other chemicals in runoff.)

But ecological crisis notwithstanding, is it possible that shrimp could actually become suicidal? Or even more goofily, be so blissfully joyful that they become reckless? Dr. Alex Ford — who conducted the study — pointed me toward other studies that show other fish swim lazily near the surface of the water when surrounded by traces of antidepressants. Are they losing all their anxiety and just happy to hang out and do the backstoke? I'd be happy for those fish, freed from their torturous survivalist chains, but look: In the words of the deeply unhappy Kurt Cobain, just because you're paranoid don't mean they're not after you.

Ford was clear to point out that, no, these shrimp are technically not suicidal, nor are they so overjoyed they're looking for the light. "Probably best not using the term 'anxiety,' as this suggests fish have conscious thought and would be anthropomorphic," he wrote to me in an e-mail. Shrimp don't really have "brains," as we understand them; their nervous systems are simply too simple. It's just that, for whatever reason, the hormone serotonin — which fluoxetine bumps up — happens to help control feelings of happiness in people, and in shrimp controls the instinct to swim toward or away from light. Don't read too much into it. Shrimp are not people, too.

But, Ford also shared another fascinating thing — he was inspired to do this study because of previous work on parasites that control serotonin levels in their host shrimp: "These parasites have evolved to do this as they require to be in their final host (fish, birds or marine mammals depending on parasite species) to reproduce and complete their life-cycle. Therefore, they increase the chances of the shrimp being eaten by making them swim out in the open." OK, so the world is a little less freaky knowing that shrimp don't get happy, sad or suicidal. But how about a world in which there are brain-controlling parasites?!