The unpopular case for A-Rod's brilliance

As the Yankees slugger closes in on 600 home runs, it's time to admit he's one of the greatest in baseball history 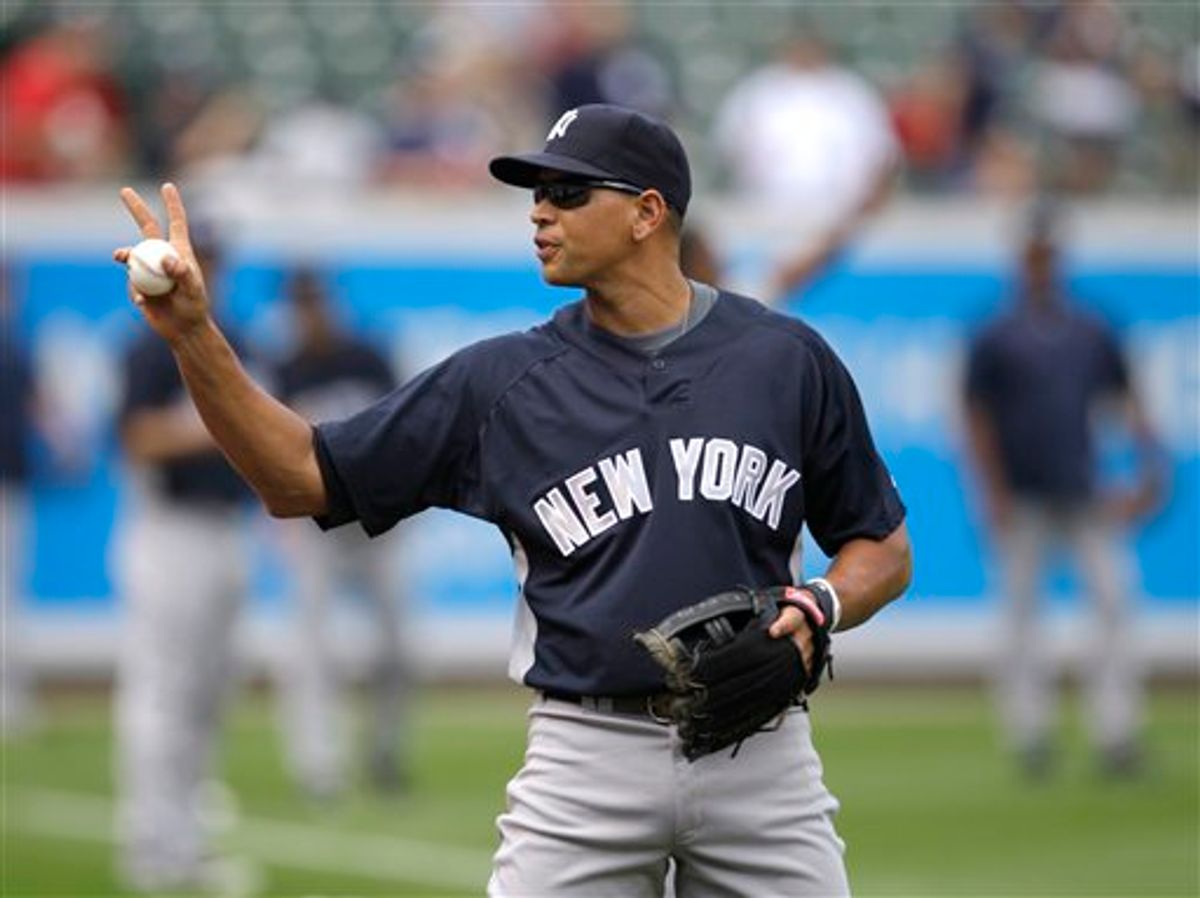 Alex Rodriguez is perilously close to hitting the 600 home run mark. On Thursday night, the Yankees slugger hit number 599 against Kansas City. There are only six players ahead of him in career home runs. I'm telling you this now because you may miss it when it happens. I mean, it will be in the sports pages and on ESPN highlights, but I'm betting that the northeast media won't make a big deal about it. In fact, some of them are already dissing the accomplishment, like Terrence Moore on MLB's Fanhouse.com, who wrote a piece called "A-Rod's 600th Merits Shrugs, Not Hugs."

By the end of this season, Rodriquez will probably have passed up Sammy Sosa (number six at 609) and moved in just behind Ken Griffey, Jr. (630) on the all-time list. I can only imagine the bad taste it's going to leave in the mouths of veteran New York sportswriters when late next season he starts to approach number four, the sainted Willie Mays (660). From there, it will probably just be a matter of time before A-Rod passes up Babe Ruth (714), Henry Aaron (755) and even Barry Bonds (762).

I'm suggesting that it might be good idea for Yankee fans to get used to the fact that Alex Rodriguez is one of the greatest players in baseball history, which they haven't so much denied as simply declined to consider.

Rodriguez gets plenty of press in New York, but even after leading his team to a pennant and World Series win last year, most of it is still negative. For all the ink on him, including Selena Roberts's 2009 book, properly called by former New Times columnist Murray Chass "a journalistic disgrace" (you can read my own thoughts about the book in my Salon story) -- we really know very little about him.

No one, to my knowledge, has even attempted a genuine in-depth profile of Rodriguez. We know which movie star he's dating, which nightclub he was at last night, and, every couple of months, when he gets together with his children – but that's about it. The New Yorker's Ben McGrath has done lengthy profiles of Boston Red Sox sluggers Manny Ramirez (who went to the Los Angeles Dodgers the next year) and David Ortiz, but nothing on A-Rod. (Or for that matter any New York players. Maybe the magazine should change its name to The Bostonian.)

Yet, when all those players wrap up their careers, there isn't going to be much doubt that Rodriguez was a greater player than either Manny or Big Papi. There really shouldn't be much doubt now. All three are comparable hitters, but neither Ramirez nor Ortiz ever made a single contribution to his team outside the batter's box, while Rodriguez was a great shortstop, has been, for the last seven years, a fine third baseman, and has stolen nearly 300 bases in his career, more than six times as many as Ramirez and Ortiz combined.

Since coming to the Yankees in 2004, Rodriguez has led the league in home runs twice, slugging three times, and, despite missing more than 60 games in 2008-2009 with injuries, has averaged over 119 runs-batted-in per full season. He's won three Most Valuable Player awards -- an excellent case could and should have been made that he deserved it last year. When he was out of the lineup, the Yankees' three replacements at third base hit a combined .202. The team was 13-15 during A-Rod's absence; he returned to hit .322 over the rest of the season, during which the Yankees went 82-42 when he was in the lineup. Maybe playing in 124 games isn't enough to establish MVP credentials (though in 1962 Mickey Mantle won the award, despite playing in 123 games), but they certainly were enough to prove his value to the team.

Exactly why the New York press and fans have never warmed up to Alex Rodriguez isn't clear. None of the most popular reasons provide a satisfactory answer on their own. Some still insist that he's arrogant, though egotistical might be the more appropriate term. At any rate, he's nowhere near Reggie Jackson's league when it comes to arrogance, and fans here loved Reggie. His brief association with steroids while he was with the Texas Rangers didn't help, but then both Manny Ramirez and David Ortiz have also been tainted by steroid use, and it didn't hurt their popularity with their home teams (or even at the New Yorker). Has he really lost favor with fans just for dating celebrities?

Rodriguez also spent a long time digging his way out from under the reputation of not being a "clutch" hitter, even though in his first 39 postseason games he had a higher batting average, .279, than Joe DiMaggio, Yogi Berra, Mickey Mantle or Reggie Jackson at similar points in their careers. In any event, his fantastic end-of-the-season run and 18 postseason RBIs in 15 games last year has obliterated that argument.

Still others maintain that he's a "carpetbagger" -- that he wanted to come to New York just to pick up a championship ring. This is the most curious rap of all: Isn't coming to New York to win precisely what professional athletes are supposed to do -- or at least what New York fans are supposed to want them to do?

New York can be a strange town sometimes. LeBron James is reviled by New York fans for not wanting to play here, while A-Rod is reviled by many because he wanted to.

It's time for Yankee fans to start thinking the A-Rod thing through. The Yankees currently have the best record in baseball, and even with two of their five starters injured and out of the rotation, they are still the betting favorites to win the American League pennant and crush whatever hapless National League team gets in their way in the World Series. If Rodriguez ends up winning at least two World Series – the same number, by the way, as Reggie got in New York – and climbs toward the all-time home run mark, Yankees fans will have to decide whether or not he's really a Yankee.

Think of it this way, folks: Do you really want Rodriguez to wear a Seattle Mariners or Texas Rangers cap when he's inducted into the Hall of Fame?