This week in crazy: Newt Gingrich 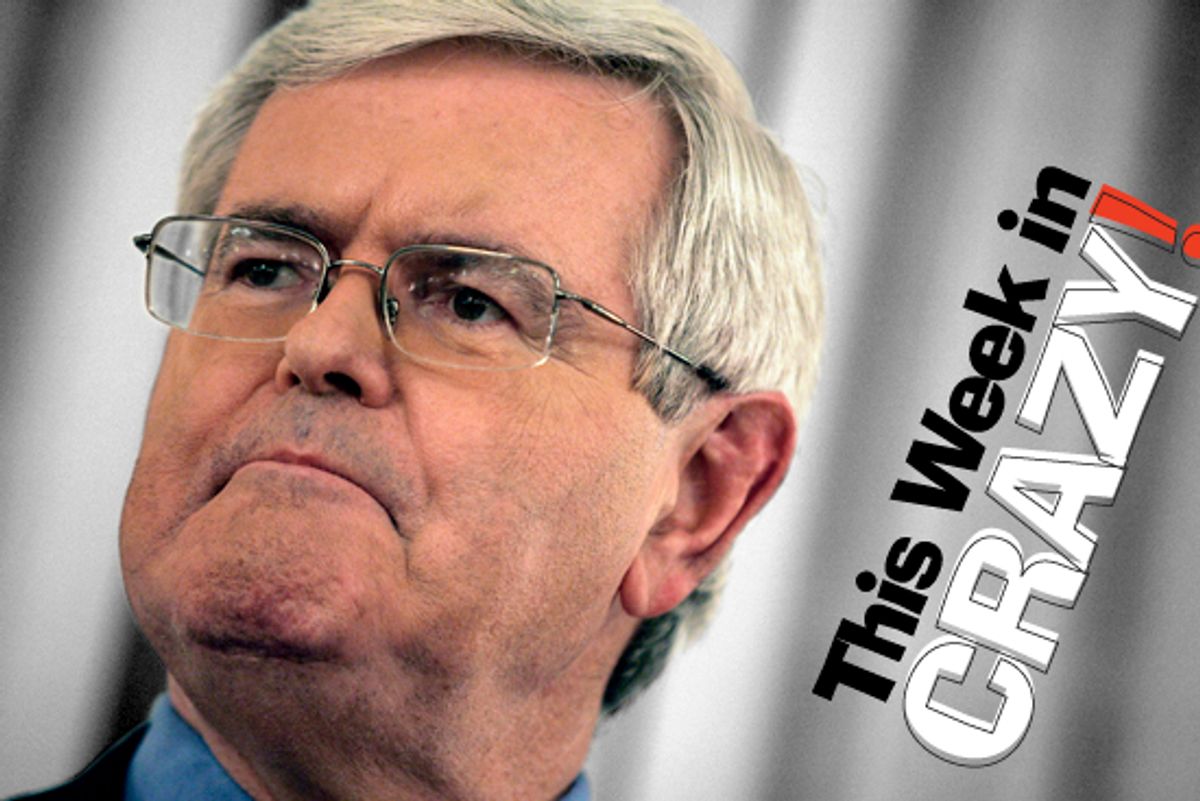 We've long considered former Speaker of the House New Gingrich more canny than crazy. He's always cozied up to the far right for cynical political gain. He's definitely amoral, as his breathtaking divorce from his cancer-stricken wife showed. And hypocritical, as his crusade against Bill Clinton proved. But this week, the man who publicly debates a presidential run every time he has a book to promote crossed the line from cynical to nutty.

The craziness came in Gingrich's un-asked-for opinion on the Cordoba House, a proposed Muslim cultural center in Lower Manhattan that you may know as "the Ground Zero mosque."

It's hard for an old Republican to keep up with the latest and greatest in base-stoking, fear-mongering political outrage. Political expediency requires you to suddenly oppose arms-control treaties and demand border fences and even defend discredited pre-Civil War doctrines like nullification. So when Newt Gingrich heard about the "Ground Zero mosque" controversy, he knew he had to take the ultra-conservative side of the issue. But because of his reputation for smarts, he had to come up with an intellectual justification for opposing the project.

The reason Gingrich came up with, it must be said, is almost admirable in its shamelessness: We must not allow Muslims to build a prayer space near the World Trade Center site because Saudi Arabia does not have any churches or synagogues:

There should be no mosque near Ground Zero in New York so long as there are no churches or synagogues in Saudi Arabia. The time for double standards that allow Islamists to behave aggressively toward us while they demand our weakness and submission is over.

In other words, it is not fair that they get to have a more repressive and undemocratic society than we do. In fact, Gingrich argues, until they promise to be as tolerant as us, and adopt our constitutionally enshrined freedom of religion, we should suspend that freedom. There's a war to fight, after all!

And it's been a long war, as Gingrich explains:

The proposed "Cordoba House" overlooking the World Trade Center site -- where a group of jihadists killed over 3000 Americans and destroyed one of our most famous landmarks -- is a test of the timidity, passivity and historic ignorance of American elites. For example, most of them don't understand that "Cordoba House" is a deliberately insulting term. It refers to Cordoba, Spain -- the capital of Muslim conquerors who symbolized their victory over the Christian Spaniards by transforming a church there into the world's third-largest mosque complex.

Now, Newt, play fair: "Overlooking" is a bit of a stretch. But we can allow that that is simply a slight exaggeration for dramatic effect. On the other hand, the bit about how this represents a new front in the thousand-year-old epic war of civilizations between Islam and the West? Well, here's the thing about that interpretation, Newt: That is al-Qaeda's philosophy.

Gingrich's attempt to hold Muslims collectively accountable for the actions of a relative handful of extremists doesn't simply reinforce al-Qaeda's narrative that America is at war with Islam as a whole; it skirts dangerously close to accepting the terrorist-friendly premise that "innocents" as we generally understand the term don't actually exist.

So congrats, Newt Gingrich, for making the people who compare the American conservative movement to the Taliban sound reasonable! For your next act, how about suggesting a nationwide ban on divorce, until the pope allows it?