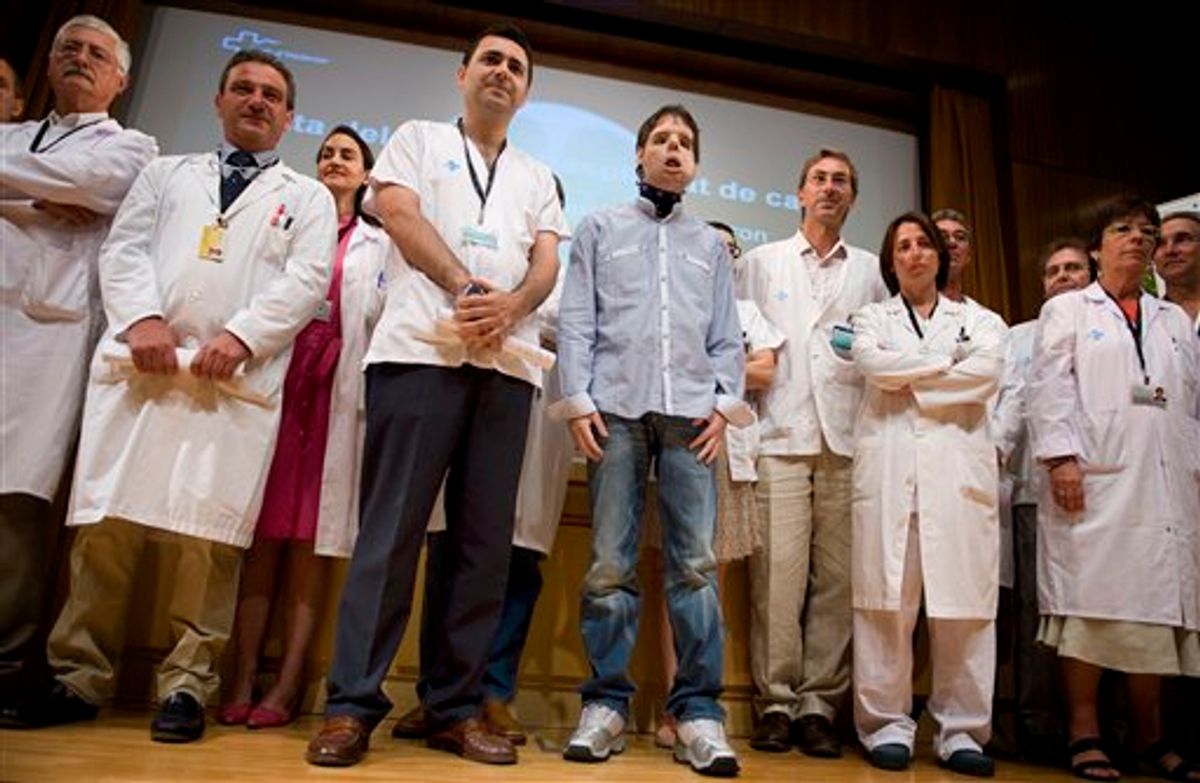 Oscar,center, a man who underwent a full-face transplant in April, poses beside Dr. Joan Barret, fourth from left, and surrounded by doctors as he appears in public for the first time in a news conference at the Vall d'Hebron Hospital in Barcelona, Spain, Monday, July 26, 2010. A 30-member medical team led by the Spanish doctor Juan Barret carried out a full-face transplant, giving a young man who lost his in an accident a new nose, skin, jaws, cheekbones, teeth and other features. (AP Photo/David Ramos) (AP)
--

The world's first full face transplant patient, identified only as Oscar, appeared in public for the first time Monday. The 31-year-old Spanish farmer was eager to show off his new look in front of television cameras at the Vall d'Hebron hospital in Barcelona, where he thanked his doctors and the donor's family.

He had trouble speaking clearly at the press conference, but doctors expect Oscar to regain up to 90 percent of facial functions and sensation after a year to 18 months of physical therapy. Not bad considering that before the operation Oscar could not eat or breathe without help from a machine. Now he can drink and eat solid foods on his own, with an ever-improving prognosis. But the best sign that the operation was a success was Oscar's beard. A week after the transplant it started to grow -- a clear sign that his body did not reject the new face.

Surgeons transplanted the entire facial skin and muscles -- nose, lips, maxilla, palate, teeth, cheekbones, mandible and all -- on Oscar's face, like a mask, in an operation that occupied a team of 30 doctors for 24 hours.

Oscar's face was disfigured five years ago when he accidently shot himself while hunting. He underwent nine failed operations before considering the transplant.

While Oscar is the first full transplant patient, there have been many successful partial transplants in the past. CBS News compiled a list of the "most amzing" ones. But, uh, aren't they all amazing?