In defense of Snooki, an American princess

The N.Y. Times pens a vicious, condescending profile of the "Jersey Shore" star -- and misses what makes her great 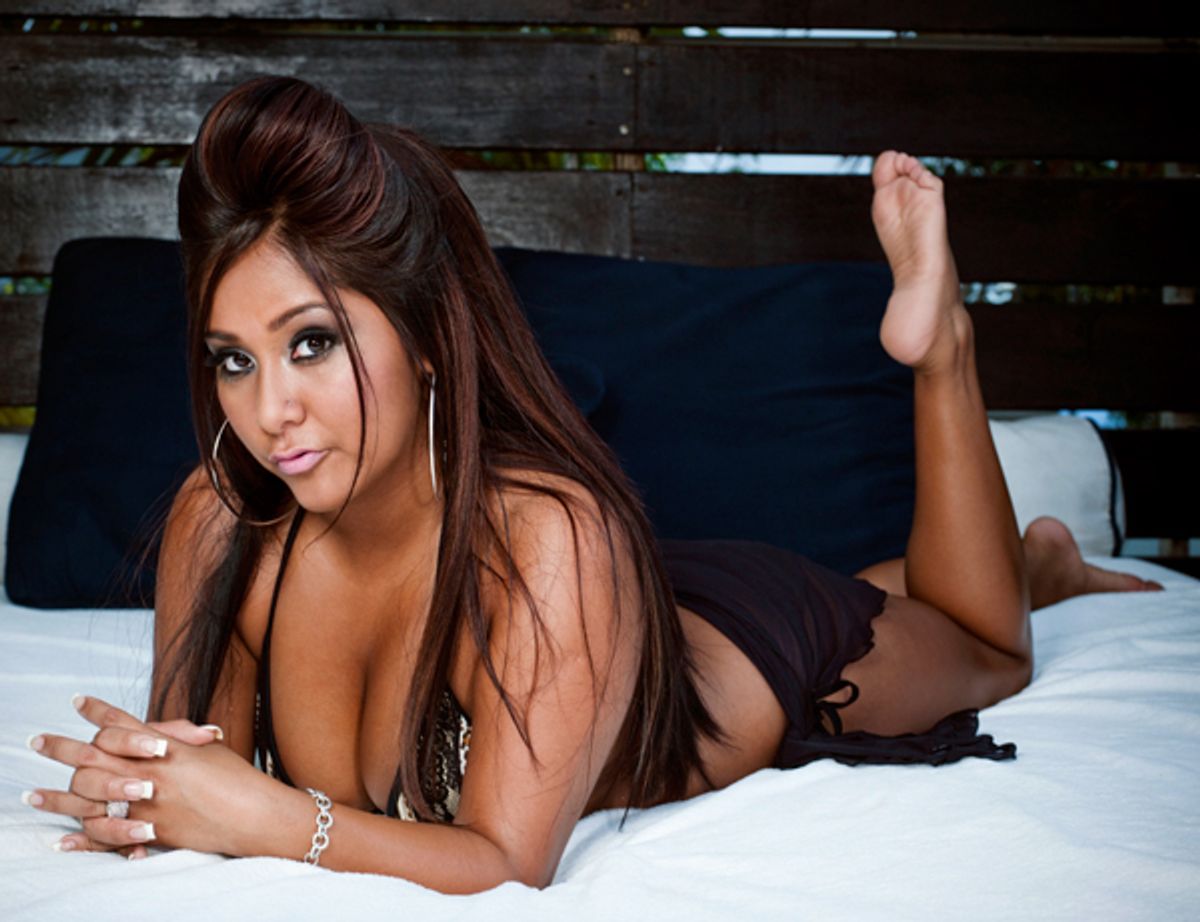 Snooki, do not ever change. Maybe you, in your inimitably resilient "Jersey Shore" way, couldn't give a damn after Cathy Horyn's spectacularly condescending recent take-down of your sudden, seemingly inexplicable fame in the New York Times. Or you may be feeling a bit down and out after being called a "yowling" "berserk windup toy." Trust me, it's not you -- it's that bitch from the paper of record.

In a Styles piece that thrashes around for a few thousand words trying to comprehend how someone so very vulgar could capture our hearts and attention so, Horyn, who made waves earlier this year with her withering dismissal of Christina Hendricks' Golden Globe attire, compares the 22-year-old reality star Nicole Polizzi to Elizabeth Taylor, "a short, busty woman with high hair, big jewelry, garish taste in clothes" -- except with an "unbridgeable divide of talent and beauty." "Trying to hold a conversation with Snooki is a little like getting down on your hands and knees with a child," she writes. "You have to come down to her level, and sometimes you almost think you need to bribe her with a piece of candy to coax her to be more responsive. She is really only responsive to her own immediate needs and desires." Wow, it's so brave of you to get down there on her level, Horyn. I hope you didn't catch anything.

Much like Lynn Hirschberg's brutal May profile of M.I.A., Horyn's neatly encapsulates everything most despicable about the Times and its cultural coverage -- its snotty, keep 'em at arm's length, can you believe these people? attitude, the way you can practically feel the reporter holding her nose while she writes.

I'm no great fan of MTV's reality genre in general, "The Jersey Shore" in particular, or the way you can't open a door in this town without one of its cast members photo bombing the event. But having spent my career around people who brag about their SAT scores far, far into their 40s: Screw you, Times, I'm off to do body shots off a Hooter girl's navel.

Snooki does not exude the bitter steeliness of a Kate Gosselin or the sad fragility of a Heidi Montag. She is volatile and frequently ill-behaved. Unlike Horyn, she didn't go to Barnard. She's that particular breed of reality star, scrappy and temperamental, but also eager to please and occasionally a whole lot of fun. Horyn would have to be blind if she didn't acknowledge Snooki's deeply burnished tan, the trademark big hair, what "Jersey Shore" producer Sally Ann Salsano acknowledges as "that East Coast mentality ... the Italian upbringing ... all the stereotypes that people accused us of making."

But if you're going to devote a story to why she's so popular, how about you take a real crack at it instead of putting her down as a moronic cartoon character? How about you acknowledge what's real and funny and self-aware in those stereotypes? Because regardless of what you think of her crude exploits and suspect judgment, there's a loose, unself-conscious joyfulness to Snooki, a don't-give-a-damn attitude that those in the more tightly sphinctered, high-class media elites seem unable to even imagine.

Not far away from the "Gossip Girl" glamorized world of private schools and debutante balls, in the Long Islands and Jerseys and the less fashionable than Brooklyn boroughs, in places like the upstate New York community college from which she hails, there are a whole lot of Snookis. She may be a hot-headed, hard-partying, attention-seeking little number, but here's a message to Horyn and the Times: She's our hot-headed, hard-partying, attention-seeking little number.

This weekend I was down the Shore myself, on a boardwalk full of heavily bronzed, greased-up versions of the MTV cast. I was hanging with a group of mostly Italian-American girlfriends from my Hoboken Catholic school -- older versions of those Garden State "guidettes" so ruthlessly skewered in the Times. I sat in an Asbury Park restaurant with a woman whose obsession with Bruce Springsteen was legendary even in our early '80s girlhood. This bar, she told us, was the spot where she finally met her idol last year. And what did she say after she boldly strode through the crowd to come face to face with The Boss? "I said, 'Where ya been?'" she replied. "How come you never come around anymore?'" Because a Jersey girl does not care how big the chops are, she will bust them nonetheless. It's not about how far you get in life -- it's remembering where you come from.

None of my old friends have ever attained stardom. We've never done anything to merit an exhaustive New York Times profile. But there's a Snooki in all of us regardless -- we little working-class girls with big mouths, we bridge-and-tunnel types the Williamsburg hipsters and the Ivy League princesses sneer at. Our cheap beers aren't a statement of irony, they're just cheap. Our handbags reflect the result of ass-busting and hard saving. And if you want a piece, it's on.

Maybe if she'd been sitting by the ocean with us on Saturday, Horyn would have dismissed us as she did Snooki, whom she says "simply isn’t capable of serious introspection," because "like a rare, unstable gas, she is not likely to last much beyond the moment." But it seems to me a writer who lives in a bubble blithely unaware she's in the midst of a class war is the truly incapable one here. And if the moment is good, who's to judge it? For those of who've spent our lives under the boots of people who believe that where they were born makes them better than us, the moment belongs to Snooki. Because we look at that "spray-painted Chihuahua," that "turnip turned on its tip" and we see the aspirational American dream. We see ourselves.