Are the American people obsolete?

The richest few don't need the rest of us as markets, soldiers or police anymore. Maybe we should all emigrate 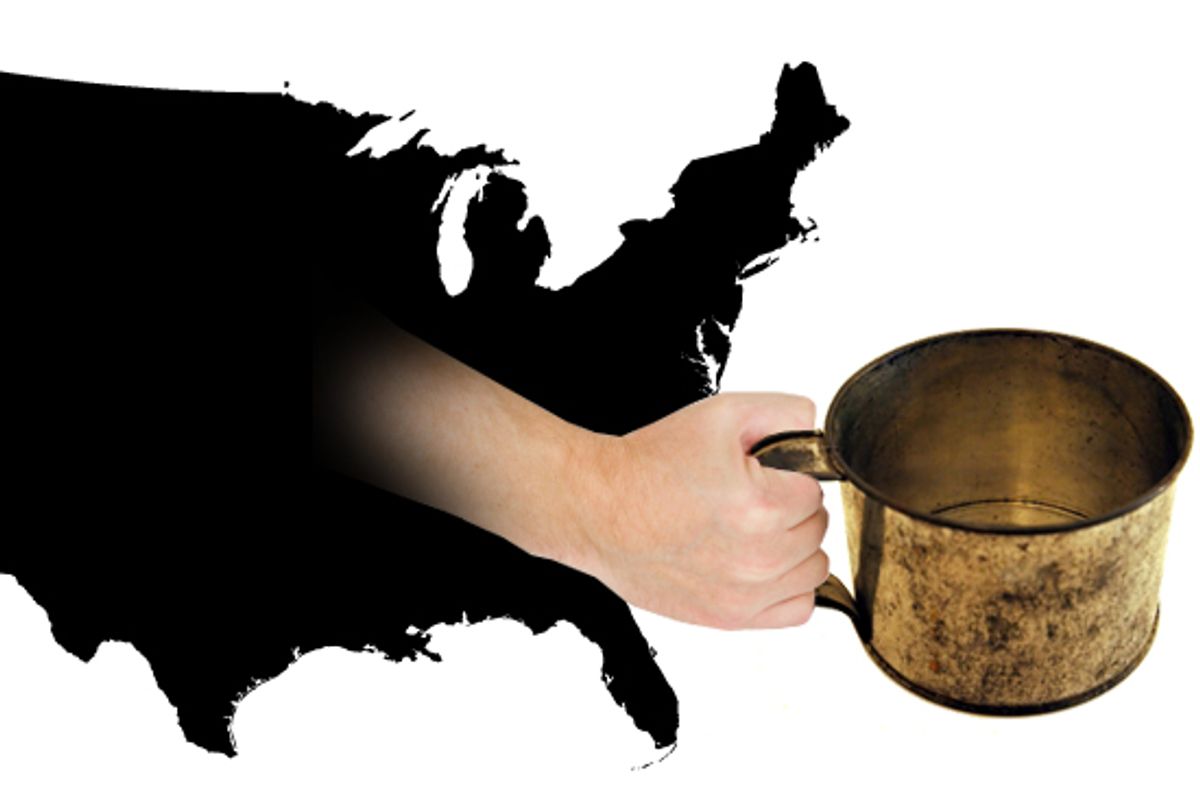 Have the American people outlived their usefulness to the rich minority in the United States? A number of trends suggest that the answer may be yes.

In every industrial democracy since the end of World War II, there has been a social contract between the few and the many. In return for receiving a disproportionate amount of the gains from economic growth in a capitalist economy, the rich paid a disproportionate percentage of the taxes needed for public goods and a safety net for the majority.

In North America and Europe, the economic elite agreed to this bargain because they needed ordinary people as consumers and soldiers. Without mass consumption, the factories in which the rich invested would grind to a halt. Without universal conscription in the world wars, and selective conscription during the Cold War, the U.S. and its allies might have failed to defeat totalitarian empires that would have created a world order hostile to a market economy.

Globalization has eliminated the first reason for the rich to continue supporting this bargain at the nation-state level, while the privatization of the military threatens the other rationale.

The offshoring of industrial production means that many American investors and corporate managers no longer need an American workforce in order to prosper. They can enjoy their stream of profits from factories in China while shutting down factories in the U.S. And if Chinese workers have the impertinence to demand higher wages, American corporations can find low-wage labor in other countries.

This marks a historic change in the relationship between capital and labor in the U.S. The robber barons of the late 19th century generally lived near the American working class and could be threatened by strikes and frightened by the prospect of revolution. But rioting Chinese workers are not going to burn down New York City or march on the Hamptons.

What about markets? Many U.S. multinationals that have transferred production to other countries continue to depend on an American mass market. But that, too, may be changing. American consumers are tapped out, and as long as they are paying down their debts from the bubble years, private household demand for goods and services will grow slowly at best in the United States. In the long run, the fastest-growing consumer markets, like the fastest-growing labor markets, may be found in China, India and other developing countries.

This, too, marks a dramatic change. As bad as they were, the robber barons depended on the continental U.S. market for their incomes. The financier J.P. Morgan was not so much an international banker as a kind of industrial capitalist, organizing American industrial corporations that depended on predominantly domestic markets. He didn't make most of his money from investing in other countries.

In contrast, many of the highest-paid individuals on Wall Street have grown rich through activities that have little or no connection with the American economy. They can flourish even if the U.S. declines, as long as they can tap into growth in other regions of the world.

Thanks to deindustrialization, which is caused both by productivity growth and by corporate offshoring, the overwhelming majority of Americans now work in the non-traded domestic service sector. The jobs that have the greatest growth in numbers are concentrated in sectors like medical care and childcare.

Even here, the rich have options other than hiring American citizens. Wealthy liberals and wealthy conservatives agree on one thing: the need for more unskilled immigration to the U.S. This is hardly surprising, as the rich are far more dependent on immigrant servants than middle-class and working-class Americans are.

The late Patricia Buckley, the socialite wife of the late William F. Buckley Jr., once told me, "One simply can't live in Manhattan without at least three servants -- a cook and at least two maids." She had a British cook and Spanish-speaking maids. New York Mayor Michael Bloomberg recently revealed the plutocratic perspective on immigration when he defended illegal immigration by asking, "Who takes care of the greens and the fairways in your golf course?"

The point is that, just as much of America's elite is willing to shut down every factory in the country if it is possible to open cheaper factories in countries like China, so much of the American ruling class would prefer not to hire their fellow Americans, even for jobs done on American soil, if less expensive and more deferential foreign nationals with fewer legal rights can be imported. Small wonder that proposals for "guest worker" programs are so popular in the U.S. establishment. Foreign "guest workers" laboring on American soil like H1Bs and H2Bs -- those with non-immigrant visas allowing technical or non-agriculture seasonal workers to be employed in the U.S. -- are latter-day coolies who do not have the right to vote.

If much of America's investor class no longer needs Americans either as workers or consumers, elite Americans might still depend on ordinary Americans to protect them, by serving in the military or police forces. Increasingly, however, America's professional army is being supplemented by contractors -- that is, mercenaries. And the elite press periodically publishes proposals to sell citizenship to foreigners who serve as soldiers in an American Foreign Legion. It is probably only a matter of time before some earnest pundit proposes to replace American police officers with foreign guest-worker mercenaries as well.

Offshoring and immigration, then, are severing the link between the fate of most Americans and the fate of the American rich. A member of the elite can make money from factories in China that sell to consumers in India, while relying entirely or almost entirely on immigrant servants at one of several homes around the country. With a foreign workforce for the corporations policed by brutal autocracies and non-voting immigrant servants in the U.S., the only thing missing is a non-voting immigrant mercenary army, whose legions can be deployed in foreign wars without creating grieving parents, widows and children who vote in American elections.

If the American rich increasingly do not depend for their wealth on American workers and American consumers or for their safety on American soldiers or police officers, then it is hardly surprising that so many of them should be so hostile to paying taxes to support the infrastructure and the social programs that help the majority of the American people. The rich don't need the rest anymore.

To be sure, wealthy humanitarians might take pity on their economically obsolescent fellow citizens. But they no longer have any personal economic incentive to do so. Besides, philanthropists may be inclined to devote most of their charity to the desperate and destitute of other countries rather than to their fellow Americans.

If most Americans are no longer needed by the American rich, then perhaps the United States should consider a policy adopted by the aristocracies and oligarchies of many countries with surplus populations in the past: the promotion of emigration. The rich might consent to a one-time tax to bribe middle-class and working-class Americans into departing the U.S. for other lands, and bribing foreign countries to accept them, in order to be alleviated from a high tax burden in the long run.

Where would a few hundred million ex-Americans go? The answer is obvious: to the emerging markets where the work and investment are found. That will show all those American union members who complain that their jobs have been outsourced to China. Let them move to China themselves and compete, instead of complaining!

Needless to say, the Chinese and Indians might resist the idea of an influx of vast numbers of downwardly mobile North American workers. But like American capitalists, Chinese and Indian capitalists might learn that ethnic diversity impedes unionization, while the mass immigration of North Americans to East and South Asia would keep wages in those regions competitively low for another few decades at least.

Once emptied of superfluous citizens, the U.S. could become a kind of giant Aspen for the small population of the super-rich and their non-voting immigrant retainers. Many environmentalists might approve of the depopulation of North America, because sprawling suburbs would soon be reclaimed by the wilderness. And deficit hawks would be pleased as well. The middle-class masses dependent on Social Security and Medicare would have departed the country, leaving only the self-sufficient rich and foreign guest workers without any benefits, other than the charity of their employers.

Of course there are alternative options, which would not require the departure of most Americans from America for new lives on distant shores. One would be a new social contract, in which the American people, through representatives whom they actually control, would ordain that American corporations are chartered to create jobs in the U.S. for American workers, and if that does not interest their shareholders and managers then they can do without legal privileges granted by the sovereign people, like limited liability.

The American people also could put a stop to any thought of an American Foreign Legion and declare, through their representatives, that a nation of citizen-workers will be protected by citizen-soldiers, whether professionals or, in emergencies, conscripts. The American people, in other words, could insist that the United States will be a democratic republican nation-state, not a post-national rentier oligarchy.

But restoring democratic nationalism in the U.S. would inconvenience America's affluent minority. So instead of making trouble, maybe most Americans should just find a new continent to call home.