The real tragedy of a "Real Housewife"

As "New Jersey" star Teresa Giudice's belongings head for auction, her detractors rejoice -- and get it wrong 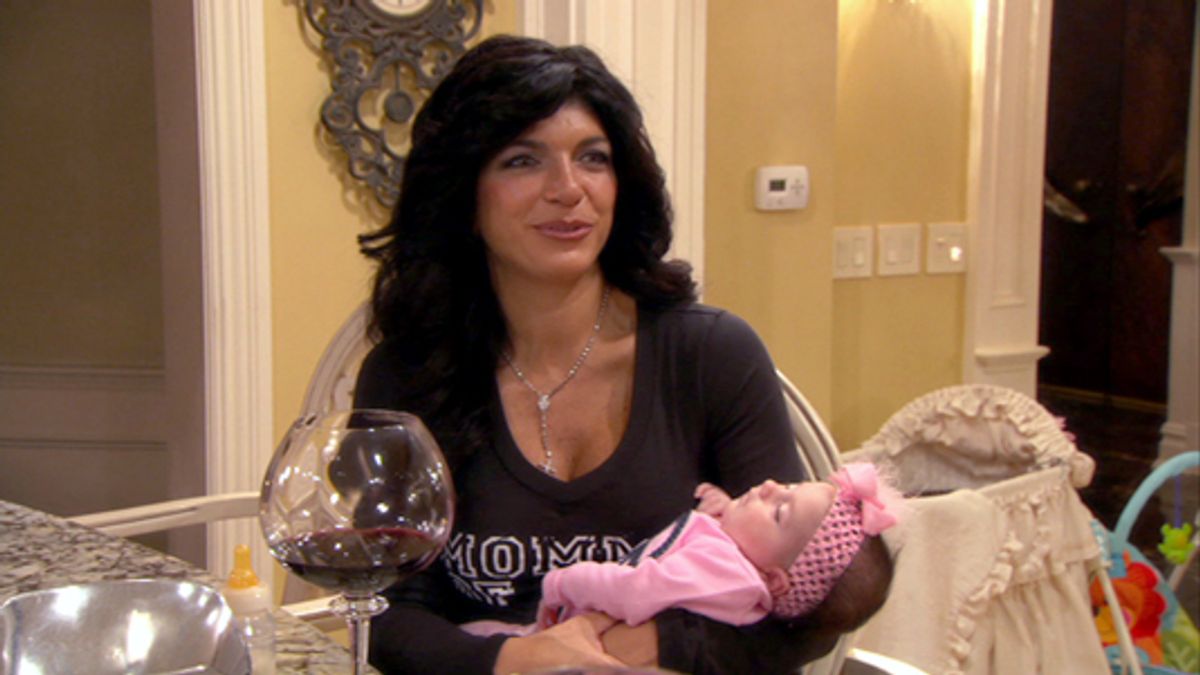 It's not quite a French nobleman's head on a stick, but it'll do. When "Real Housewives of New Jersey" star Teresa Giudice and her husband filed for bankruptcy last October, claiming nearly $11 million of debt, it was a gesture for which the word "schadenfreude" was created. Giudice, the table-flipping diva who just last month was still boasting to InTouch magazine that her multimillion-dollar Towaco, N.J., digs are "nothing but marble, granite and onyx," would appear the ideal candidate for a little cosmic comeuppance. And sure enough, the news Monday that her possessions were being auctioned off next month out of their home (which is itself at risk for foreclosure) did not provoke mass weeping for the reality queen and her family. "Scum crooks" said a commenter on CNN. "It’s called karma and looks like that boomerang has come back to hit you in your big mouth" was the opinion on People.com.

Those of us struggling and doing without every day just to live within our considerably humbler means could certainly be forgiven a wry moment of "how the mighty have fallen" amusement. Is she going to have to shop at T.J. Maxx like the rest of us now? Oh boo hooooooo.

But on the list of favorite targets, Giudice ranks pretty low. If it were Tony Hayward's possessions on the block, if Goldman Sachs was holding a garage sale, I'd totally be getting off right now. But a family with four kids auctioning off its furniture -- no matter how foolishly, extravagantly it got itself into this pickle -- is ultimately plain sad. And it does raise questions regarding the pathology of overspending itself.

Nobody needs to throw her kid a spa party for her ninth birthday or get a diamond as an anniversary gift. But financial denial can be a devastating thing. I've recently had a front row seat for the havoc and shame wrought on a friend's family after one member quietly, compulsively racked up well over a million dollars in debt. Sometimes it's not a simple matter of a little belt tightening here and there, not when the brain holding the credit cards isn't fully in control.

Are the Giudices just a pair of selfish, shortsighted Jersey knuckleheads who got what was coming, or a deeply deluded duo who need an intervention? The fact that even now Teresa refers to bankruptcy as "a fresh start" rather than a self-imposed failure suggests she's still got a ways to go, living on planet Earth-wise. And when Giudice's lawyer told People.com Monday that he's trying to stop the auction, because it includes assets purchased after the bankruptcy filing, you've got to wonder what items he's referring to. The Celestron telescope? The Rosewood case grand piano? The Sea-Doo Bombardier X20 jet boat? My heart! It's bleeding!

Sure, maybe they'll sell off their multiple chandeliers, get some help from the family, continue their TV appearances, and wind up still far better off financially than you and I and our double coupon clipping lifestyles will ever get near. But Teresa Giudice didn't ruin the Gulf Coast or peddle subprime mortgages or make you lose your health insurance. She was rich and clueless; she is, damningly, a "tacky" bigmouth. That's certainly grounds for revolution in some circles, but is it a capital offense in this one?

We're all to a certain extent just a list of our stuff. If you've ever moved, or cleaned out a deceased loved one's house, you know how quick and cold the transformation can be from personal treasures to junk on the curb. Yet, unlike Giudice, I've never faced the prospect of auctioning off my wedding ring, or a lot containing my children’s "Toys, Furniture, Books, Games, Framed Photos, etc.," or even my "assorted hand tools and step ladders." I never had everything I ever had in the world up for grabs to the highest bidder, all while the world laughed at my mistakes. And if you haven't either, then in that regard your life is nicer than Teresa Giudice's. We don't have to feel sorry for her. But maybe we can put down the knitting needles and take her head off the pike now.