The woman who could save ESPN

Mary Jo Kane has long criticized sexism in sports. Now, the media critic is entering the belly of the beast 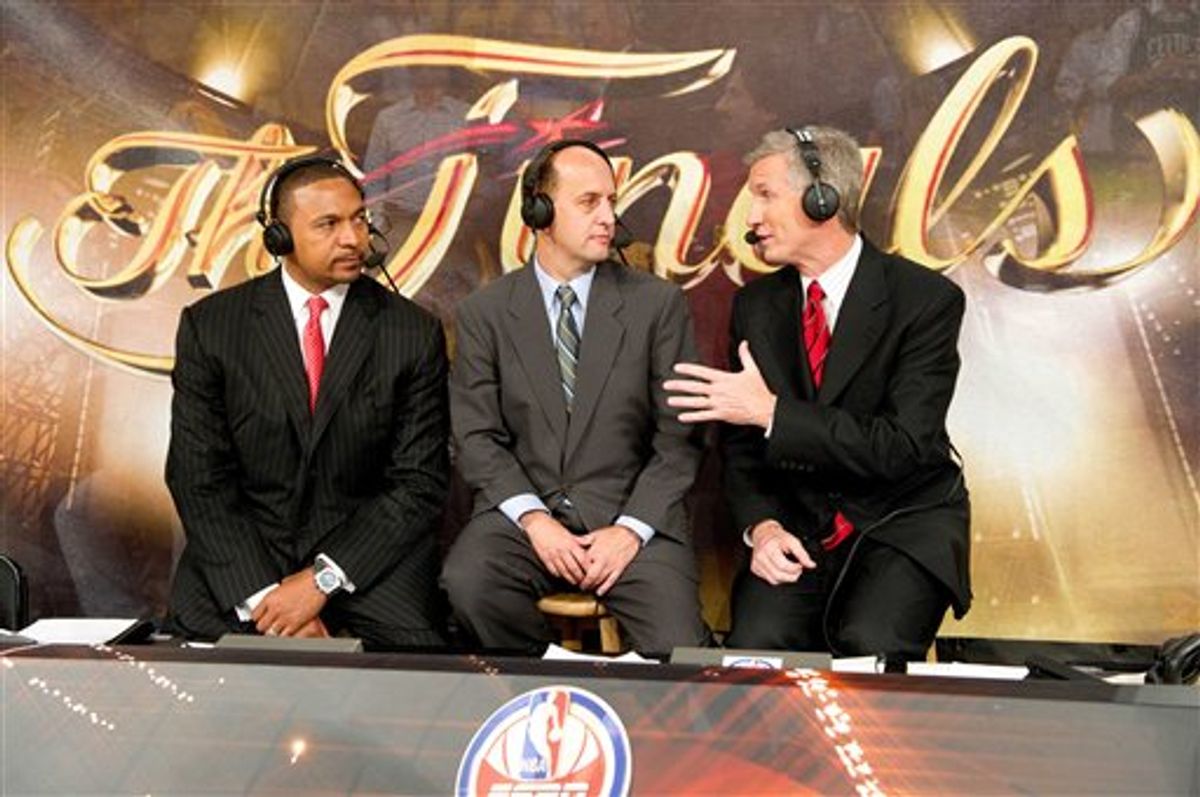 In this image provided by ESPN, commentators Mark Jackson, left, Jeff Van Gundy, center, and Mike Breen are shown on the ESPN set during an NBA basketball game between the Los Angeles Lakers and Boston Celtics at the Staples Center in Los Angeles, June 3, 2010. With Jeff Van Gundy and Mark Jackson linked to coaching openings, how long can ABC keep its trio together? (AP Photo/ESPN, Scott Clarke) ** NO ARCHIVING, NO SALES ** (AP)
--

When it comes to sports and media and guy stuff, ESPN is the big, hairy monster. It's a towel-flicking electronic locker room with a big sign on the door that seems to say, "For Boys Only!"

When it comes to sports and media and gender issues, Mary Jo Kane is among the nation's most outspoken critics of the sexualized imaging of women athletes -- what was Venus Williams wearing!?!? -- and a dogged chronicler of scant coverage of women's athletics on sports pages and TV channels.

A University of Minnesota professor and director of the Tucker Center for Research on Girls & Women in Sports, Kane is the author of such page-turning journal articles as "Sexual stories as resistance narratives in women's sports: Reconceptualizing identity performance" and "Expanding the boundaries of sport media research: Using critical theory to explore consumer responses to representations of women's sports."

So, who'da thunk that the good professor would be asked inside the macho ESPN tent?

Kane has joined an advisory panel that will guide the ESPN behemoth on its future coverage of women's sports and women athletes. In fact, ESPN is in the process of launching a new business and digital platform called espnW . . . which stands for ESPN women.

Kane may be wandering into the belly of the beast, but that's OK with her. She has long offered presentations to any who would listen or watch about how the major media powers -- such as Sports Illustrated, TV networks and now ESPN -- regularly devote time and space to women's sports via provocative, heavily heterosexual images to, theoretically, attract male fans.

At one of Kane's lectures years ago, a woman stood and said: "This is horrible. What are you going to do about it?"

Deer-in-headlight-like, Ph.D. Kane stammered and replied: "What am I going to do about it? Well, I'm an academic. I can't tell you what to do about it. I'm just going to tell you about the problem."

Two decades later, still critical of the role the mass media has played in poorly promoting women's sports achievements, Kane now finds herself in the lofty position of being asked by ESPN "what I think it might take to build an audience, about how they should portray women's sports, where I can say, 'You've got it all wrong — sex doesn't sell women's sports.' "

In her view, by refusing to regularly emphasize women athletes' dedication and mental toughness — instead selling beauty and jiggling — TV networks are alienating the exact fan base for women's sports they should be seeking: girls, women and fathers with daughters.

ESPN, the highly profitable collection of TV channels, websites, magazines and book publishing, formed espnW last year. From Sept. 30 to Oct. 2, espnW will conduct a brainstorming session with about 30 experts on women's sports -- coaches, athletes, scholars -- to "provide advice and insight to the espnW team, particularly as it pertains to our content and editorial focus," espnW vice president Laura Gentile told MinnPost in an e-mail.

Gentile said that espnW won't be a television network in the "foreseeable future," but rather a website, a mobile property and a social networking space.

In a recent interview at the Paley Center for the Media, Gentile's boss, ESPN president George Bodenheimer, said about 30 percent of ESPN viewers are women. He said espnW is designed to attract high school girl athletes to "grow the next generation of female sports fans." After all, 3.1 million girls played high school sports in 2009, an untapped market for ESPN.

"People always want to think that we're just a male-oriented company and we largely sell our advertising that way," Bodenheimer said at the Paley Center. "[But] don't get into a room and say that women aren't sports fans. The meeting will end ugly."

But that meeting couldn't be any uglier than a stunning report (PDF) released last month about the declining coverage over the past decade of women's sports by ESPN. (Let's not single out ESPN; coverage in local media outlets also seems to be suffering as staffing declines, space and time are reduced and resources are consolidated so news organizations regularly send six reporters to, say, a Vikings game and often none to a Gopher women's basketball game.)

In the study, professor Michael Messner of the University of Southern California and professor Cheryl Cooky of Purdue found that ESPN's signature SportsCenter news show devoted only 1.4 percent of its airtime coverage to women's sports, down from 2.2 percent in 1999 and 2.1 percent in 2004. Even the amount of time women's sports scores and news received on the bottom-of-the-screen crawl was reduced.

Messner and Cooky observed some progress over time, finding less "sarcastic humor" about women's sports and a reduction of the portrayal of women athletes in demeaning ways. But, they noted, "this may in part reflect that women in any form were increasingly absent from the broadcasts."

Kane plans to tell espnW's developers all that and more in the coming months as she hopes to push ESPN's guys into opening the door to their long-held exclusive electronic treehouse.