The homeless brother I cannot save

A year ago, Jay traded my parents' home for the street. But the more I try to help him, the more I lose myself 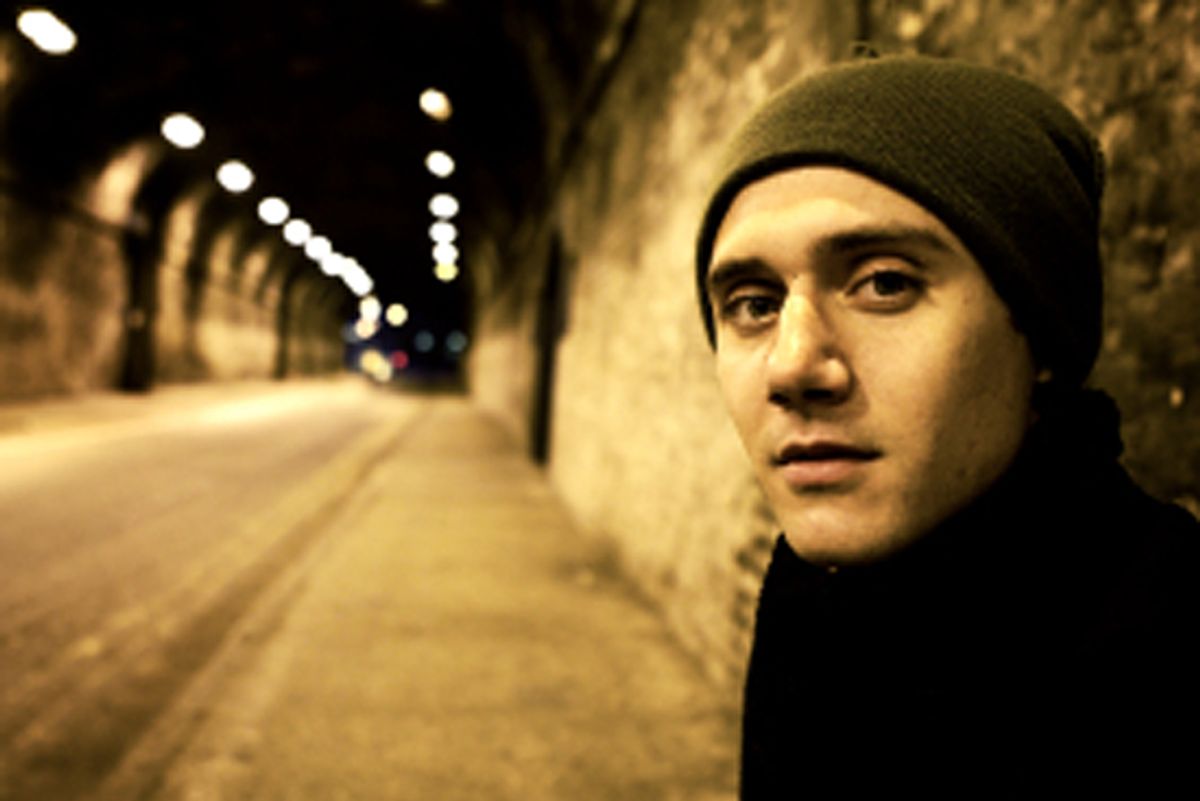 Like any New Yorker, I was no stranger to homeless people. I passed by them on my way to the shiny glass tower where I worked for a glossy women's magazine: the older lady perched atop a milk crate in the subway station, the man curled up in a dirty sleeping bag and clutching a stuffed animal. They were unfortunate ornaments of the city, unlucky in ways I never really considered.

Until one hot summer day in 2009 when my little brother Jay left his key on the coffee table and walked out of his house in West Texas to live on the streets instead. In the days that followed I spent hours on the phone with detectives, social workers and even the FBI, frantically trying to track him down. A friend designed a "Missing" poster using the most recent picture I had of him wearing a hoodie and a Modest Mouse T-shirt, a can of beer in his hand and a deer-in-headlights expression on his face. I created a Facebook group and contacted old acquaintances still living in our hometown of Lubbock, begging everyone I even remotely knew to help me find him. No luck. If it had been me, a pretty young white woman, chances are my face would have been all over the news -- but the sudden disappearance of a 20-year-old guy with paranoid schizophrenia didn't exactly warrant an Amber Alert.

In the year and a half that mental illness had ravaged my brother's mind, I'd learned to lower my expectations of what his life would be like. The smart kid who followed politics in elementary school probably wouldn't become a lawyer after all. Instead of going to college after high school, Jay became obsessed with 9/11 conspiracy theories. What began as merely eccentric curdled into something manic and disturbing: He believed the planners of 9/11 were a group of people called "The Cahoots" who had created a 24-hour television network to monitor his actions and control his thoughts -- a bizarre delusion that appeared seemingly out of nowhere. Eventually, his story expanded until "The Cahoots" became one branch of the New World Order, a government whose purpose was to overturn Christianity, and he had been appointed by God to stop it.

This made it hard for him to act normal, even in public. He'd lost his job busing tables after yelling, "Stop the filming and hand over the tapes" to everyone dining in the restaurant. Having friends or even a coherent conversation wouldn't be possible unless he took the anti-psychotic medication he'd been prescribed while he was in the mental hospital. A legal adult, he was allowed to refuse treatment, and he did. Otherwise "The Cahoots" would win.

I counted each day he'd been missing until they became weeks, until the number was so high I wondered if he was even still alive. That number was about the only thing I continued to keep track of. Dirty clothes and dishes piled up at home, deadlines were missed at work, and I only got out of bed if it was absolutely necessary. I cried often, but especially during thunderstorms, a reminder that wherever my brother was, he was unprotected. Eventually it became clear that I was losing it, too. So I did what my brother wouldn't allow himself to do: I started taking a pill that helped usher away my anxiety and depression.

Weeks after Jay disappeared, police in Maryland found him talking to a spider and had him hospitalized. He stayed for 72 hours. Then he went missing again.

Sept. 11, 2009, was one of those drizzling mornings when I thought of my brother. There was the usual undertone of reverent sadness in the city, but for me, the date was a reminder of all that had gone wrong inside Jay's mind. Yet on that day my phone finally rang.

"Hello." Jay's Southern drawl was unmistakable. I sat straight up in my desk chair at work wondering what I should do. Record the call? Take notes?

"Where are you?" I asked, images of him sitting in a jail cell or stranded alone in an alley flashed in my head, but I still wasn't prepared for the answer he gave.

My heart filled with hope. Then he asked me if I'd gone to the witchcraft celebration at the World Trade Center, where the Sorcerers had ordered the wind and the rain to destroy the ceremony. Once again, I just felt like a helpless stranger.

I asked nervously if I could buy him dinner. To my surprise, he agreed. Twenty minutes later I met him near Penn Station, hunched under an awning next to a big blue tarp that covered his backpack and my paisley Le Sportsac duffel he'd once borrowed. His pale skin had tanned and hair covered his face. He was staring at people as they walked by, but he didn't see me until I said his name. Standing face-to-face it was clear that he had lost a lot of weight. His cheekbones jutted out from his once-full face. If I had seen his picture I would have gasped. Instead, I just held out my arms.

Since it was raining, I suggested we walk across the street to Starbucks, so we could decide where to go for dinner. The truth was that I wanted to get a better look at him and decide if I (once again) needed to call the police who would most likely commit him involuntarily to a mental hospital. Since I'd rushed from work to meet him I was wearing stilettos, a pencil skirt and silk top. Jay looked like he hadn't bathed in over a week. His hair stood straight up from grease and (I guessed) constant pulling and he was wearing a lime green T-shirt he had made before he left home with a screen-printed Egyptian woman and the words "Ishtar is the whore of Babylon." Ishtar, whom you may remember from Greek mythology, had surpassed "The Cahoots" as the primary character in Jay's world. He told me that "that whore Ishtar" had been popping up everywhere lately as if it were the most hysterical thing he'd ever heard. He was laughing, I soon discovered, because a picture of Ishtar was on his cup of hot chocolate. And here I thought it was just the Starbucks logo. But I saw in Jay something I hadn't seen in previous conversations, marked by anxious breathing and gibberish: He was relaxed, even concise.

Zagat has no recommendations for where you should take your homeless brother to dinner. We settled on the Mexican chain Chevy's and sat in a booth near the back. He told me about hitchhiking to New York and sleeping in Central Park until the cops kicked him out. He grinned as he talked about sleeping on the steps of a downtown school, his smile still as charming as it had been when he was 7 and gave me a matchbox Dodge Viper on my 16th birthday, saying he wished he could buy me the real thing.

"Do you consider yourself homeless?" I asked.

"Oh, yes!" he answered proudly. I wondered if the constant motion of wandering from town to town, never knowing where he would sleep or eat next, helped quiet the voices he heard. If it was his own kind of medication, and if so, could I really tell him that was the wrong way to live?

When the food arrived, Jay dug into the chips with his grubby hands. As he lectured me about the New World Order, I thought about little specks of dirt flying off of his fingers and onto the salted chips. "You can have some of this," he motioned to the chile con queso. I had a choice at that moment: I could ignore the gross factor and eat with my brother — insanity, filth and all— or I could keep my hands clean and preserve the distance that had grown between us. I went for the chips.

Earlier in the year I'd bribed him with a trip to visit me on the condition that he took his meds. Now he was sitting in front of me and as much as I wanted to let him stay in my apartment --  and because my therapist discouraged it and my roommate rightly put her foot down -- I knew I couldn't let him. I approached the topic cautiously, my voice shaking as I asked, "Do you know why you can't stay with me?" His voice small and shamed, he answered, "Because I won't take my medication." He had always denied that he had schizophrenia, but his omission gave me hope that maybe some day that would change.

I tried to quiet my own inner voice that told me Jay needed to be in the hospital where a team of psychiatrists in white coats experimented with medications that would fix his mind. I could do some things for my brother: I could give him a little money for cigarettes. I could buy him a new backpack, a sleeping bag, good walking shoes. But the more I pushed him to get help, the more my own sanity escaped me.

So I let him go. He went to New Jersey. Florida. Louisiana. To a place where he told me from a pay phone he wouldn't call anymore because he didn't want me to know his whereabouts. I can only imagine what he looks like after a year on the streets: His hair must be long, skin tan and hardened, and his rail-thin body caked in dirt. He probably doesn't look much different than the homeless people I pass by on the streets of New York City. Seeing them makes my heart ache, makes me think about those they may have left behind, people who long to dust them off and put them down the right path but who know, in the end, it's not their choice.

Ashley Womble lives in New York City. She is writing a memoir.

Ashley Womble lives in Brooklyn and is writing a memoir.