The socialite is accused of doing a Hitler pose on a yacht. Are we becoming too quick to pull out the Nazi smear? 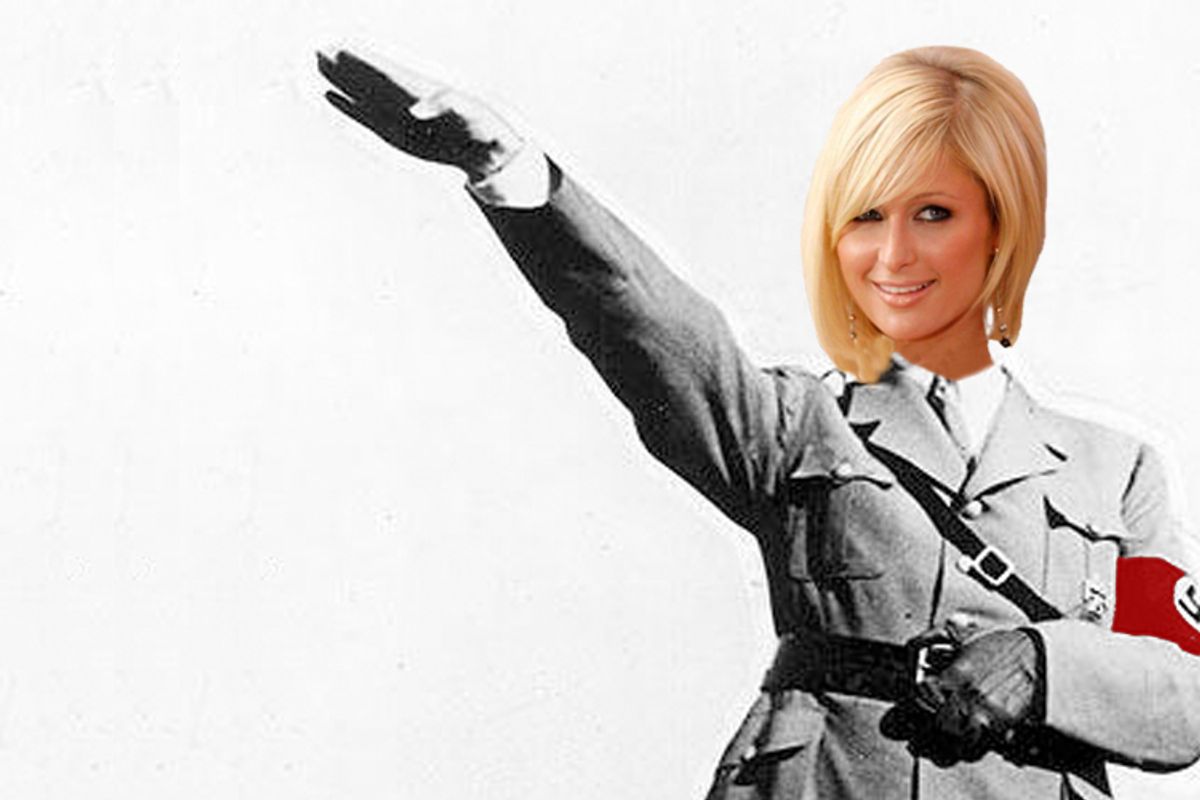 It's been a great week for Nazi references. First, while partying in St. Tropez, Paris Hilton briefly reminded the world she still exists by donning a military style hat, sticking her forefinger underneath her nose, and raising her right hand stiffly into the air. To make matters more absurd, her publicist promptly insisted she was merely dancing and scratching her face, explaining the impossibility of her doing a Nazi salute because, "Half of her family is Jewish and many of her friends are as well."

Oliver Stone, meanwhile, generously giving Mel Gibson a day off from being the biggest douche in Hollywood, gave a scathing interview for the Sunday Times of London that touched upon "the Jewish domination of the media" and the fact that "Hitler was a Frankenstein, but there was also a Dr. Frankenstein. German industrialists, the Americans and the British." Though he issued an apology Monday, saying, "I made a clumsy association about the Holocaust, for which I am sorry and I regret," the remarks, coming as they did from a guy who in January declared "Hitler is an easy scapegoat," were not universally absolved. Fox News, Stone's spiritual twin in restraint and good taste, still declared him guilty Tuesday of "empowering evil."

Nazism, like other heavily loaded, deeply painful subjects, isn't exactly the sort of thing one jokes easily about. And the difference between a celebutard possibly goofily goose stepping on a yacht and an Oscar-winning director not wishing to scapegoat Hitler is clear. But after a Facebook page for an "Auschwitz Spa" with gas saunas and a "very slimming" diet was condemned this week by the Simon Wiesenthal Center as the "latest trivialization of the Holocaust" (and subsequently removed) we have to wonder -- what do we talk about when we talk about Nazis?

An "Auschwitz Spa" is obviously offensive. But is trivialization always a bad thing? We might shudder when Paris Hilton dons a finger mustache, but when John Cleese does it, it's bloody brilliant. Is it possible that we can understand that the Holocaust is a blight in human history and an ongoing pain, that anti-Semitism is a thriving affliction in too many parts of the world today, and still celebrate the "Soup Nazi" reopening for business?  Can our minds reel at the news that just Wednesday, 90-year-old former Belzec camp guard Samuel Kunz was charged with participating in the murder of 430,000 Jews during the Holocaust -- and still enjoy, nay, be entertained by the kicking of Nazi ass in "Inglourious Basterds" or "Dead Snow"? Anyone who's spent any time online knows the persistence of the meme, the rapidity with which discussions turn into Holocaust analogies and the ease with which any news story can be an excuse for Hitler to blow his top.  Because being open about malevolence isn't necessarily an endorsement of it -- far from it. Sometimes it's just that the only way to look at unfathomable horror is sideways.

While Paris Hilton and Oliver Stone clearly need considerably more sensitivity training, the N-word isn't always verboten. Surely the power of the word and its imagery can be applied with a degree of precision and even, occasionally, humor. Sometimes used hyperbolically, sometimes with dead seriousness, Nazism is the mot juste for what it made itself -- unambiguously synonymous with pure evil.