The unbearable sorrow of being Tony Hayward 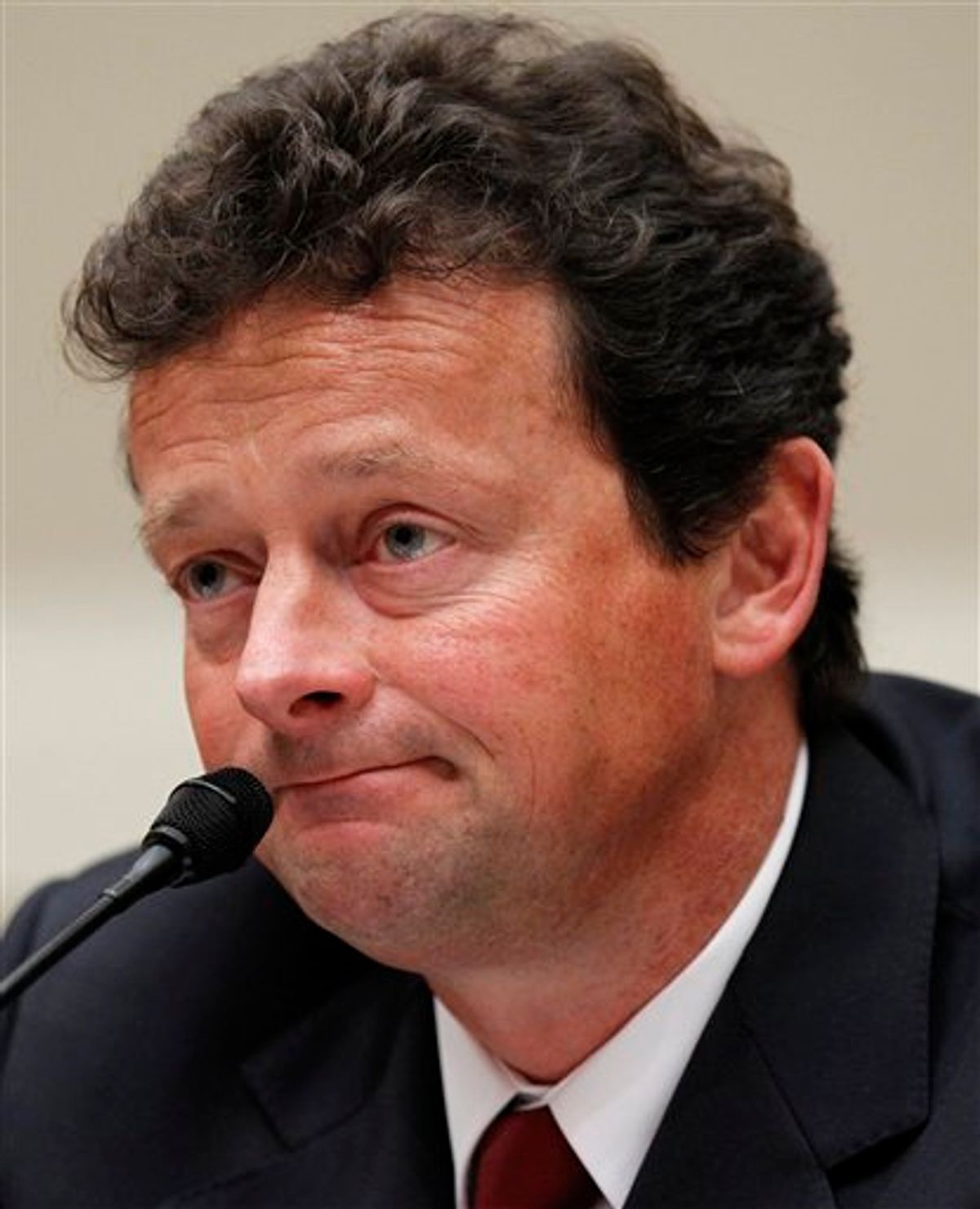 FILE - In a Thursday, June 17, 2010 photo, BP CEO Tony Hayward testifies during a House Oversight and Investigations subcommittee hearing on the role of BP in the Deepwater Horizon Explosion and oil spill in Washington. Hayward, who became the face of BP's flailing efforts to contain the massive Gulf oil spill, will step down as chief executive in October and be offered a job with the company's joint venture in Russia, a person familiar with the matter said Monday, July 26, 2010. (AP Photo/Alex Brandon, File) (AP)
--

We're going to miss having Tony Hayward around to mock. Most top corporate executives have refined the art of saying absolutely nothing that could possibly be considered offensive into a fine art. But Hayward, the outgoing BP CEO, has a mouth that just doesn't know when to stop. It's refreshing!

Here's the latest public relations atrocity, a looking-back-in-sadness, attempting, but miserably failing, to assume the stiff-upper-lip response to his forced ouster.

"This is a very sad day for me personally. Whether it is fair or unfair is not the point.

I became the public face [of the disaster] and was demonized and vilified. BP cannot move on in the U.S. with me as its leader ... life isn't fair. Sometimes you step off the pavement and get hit by a bus."

One is tempted to simply observe that when you are the CEO of a publicly traded company that announces a $17 billion loss in a single quarter, you have little claim to job security. The traditional justification for exorbitant executive compensation is based on the (dubious) theory that the market rewards executives appropriately for the theoretically outsize role that they play in a company's fortunes. Live by the quarterly bottom line, die by the quarterly bottom line. So shut up already.

Life isn't fair. This is a lesson most of us learn early on, along with the corollary proposition that whining about it gets you absolutely nowhere. But the truly offensive part of Hayward's quote is the notion that he, the exiled-to-Siberia CEO with the fat $18 million financial parachute, somehow got "hit by a bus."

The families of the 11 oil rig workers who died in the Deepwater Horizon explosion got hit by a bus. The shrimpers and oyster fishermen whose livelihoods, for now, have been destroyed, got hit by a bus. The economy of the entire Gulf of Mexico seaboard got hit by a bus. Meanwhile, Tony Hayward and his family will live comfortably ever after, and if he learns to keep his lips sealed, the demonization and vilification will eventually subside to a dull roar. Maybe he'll even get his life back.