Fred Barnes not on a team? Why did GOP pay him?

The Weekly Standard editor claimed political purity in bashing Journolist, but he's on the Republican payroll 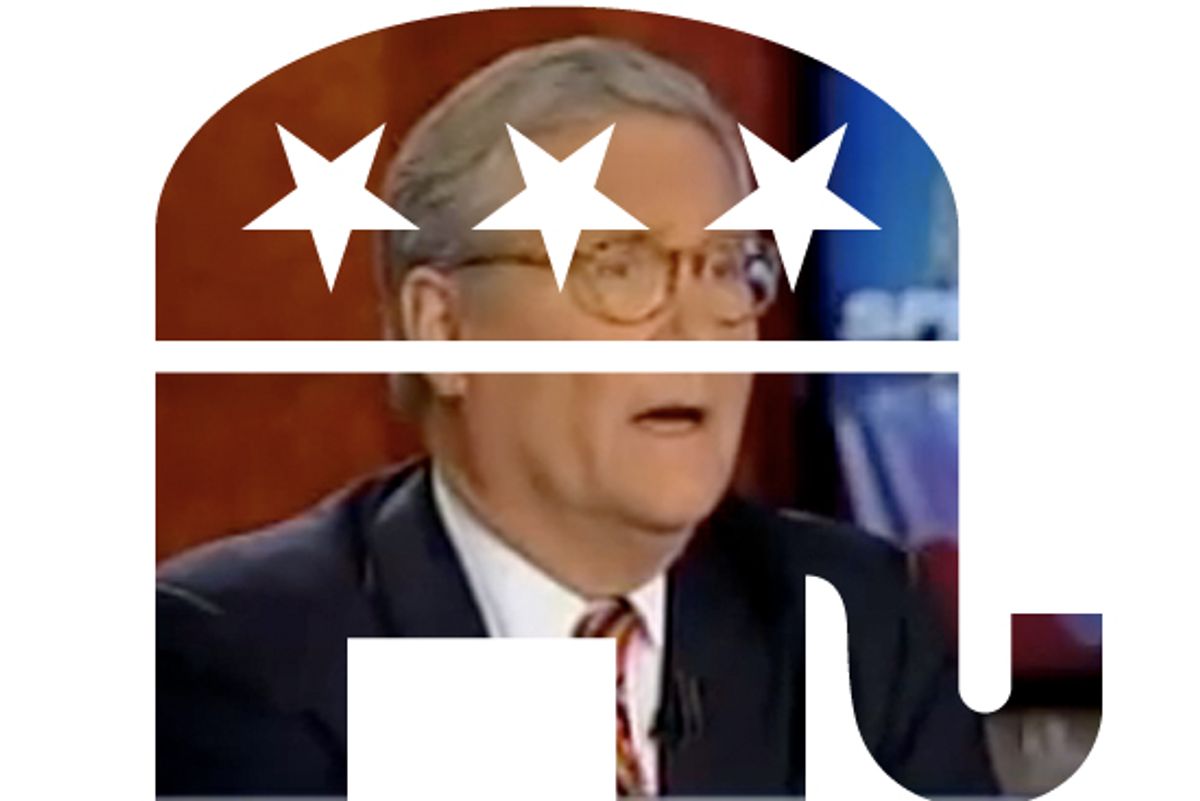 In the pages of the Wall Street Journal, Fred Barnes has lately lamented the betrayal of "traditional journalism" by the liberal denizens of Journolist -- the defunct listserv that conservatives have used to revive the debate over "liberal media bias." His widely quoted Journal Op-Ed noted that before Journolist, neither liberal nor conservative journalists were likely to be "part of a team," and went on to add:

"If there's a team, no one has asked me to join. As a conservative, I normally write more favorably about Republicans than Democrats and I routinely treat conservative ideas as superior to liberal ones. But I've never been part of a discussion with conservative writers about how we could most help the Republican or the conservative team."

This assertion of political purity struck me as false, coming from a journalist who has appeared repeatedly as a speaker at Republican Party events across the country -- a breach of the political boundaries of "traditional journalism" that few, if any, of the writers on Journolist, for example, would ever contemplate.

Nevertheless, it is true that Barnes has enjoyed greater credibility than other journalists on the partisan right throughout his career. After all, he is a former reporter for such publications as the Washington Star, the Baltimore Sun and the New Republic. He was once a Nieman Fellow at Harvard and served as one of three panelists for the first nationally televised debate between Ronald Reagan and Walter Mondale in 1984.

Now, however, there is further evidence that Barnes not only routinely helped Republicans raise money as a banquet speaker, but accepted tens of thousands of dollars from party organizations as well:

• In February 2006, Barnes was paid $10,000 plus travel expenses by Oregon's Lane County Republican Central Committee to deliver the keynote address at the annual Lincoln Day Dinner. (Thanks to Carla Axtman for research assistance.) These payments, recorded in filings with the Oregon secretary of state, were evidently made through the Premier Speakers Bureau of Franklin, Tenn., which represents other Fox personalities including Sean Hannity, Dick Morris and Mike Huckabee. Barnes is no longer listed on the Premier website, but the company did not respond to phone or e-mail inquiries about its relationship with him.

• In February 2007, Barnes spoke at the annual  Lincoln-Reagan Dinner held by the Republican Party of Fort Bend County, Texas -- home of former House Majority Leader Tom DeLay, who purchased a ticket to the event. The party organization's filing with the Texas Ethics Commission shows two payments of $5,000 each on April 26, 2007, to Premiere Speakers Bureau (with the notation "LRD 2007 Speaker - Fred Barnes") and travel expenses of $1,823. Photos of a smiling Barnes with various local dignitaries at the event, which netted a reported $70,000 for the party, can be viewed  here.

• In early March 2008, Barnes served as the keynote speaker for the Republican Party of Palm Beach County at its annual Lincoln Day Dinner. Whether he received the customary $10,000 is not clear because the party's  filing with the Palm Beach County Supervisor of Elections show only a single payment of $5,500 to Premiere Speakers Bureau on Feb. 18. The committee reported net $120,000 in net proceeds from the event.

Barnes didn't return a call seeking comment. Neither did a Fox News spokeswoman. The question they avoided answering is whether accepting money from party organizations is appropriate for any political journalist, and whether such payments fall within the ethical guidelines of Fox News. Whatever Fox might say, the Murdoch network’s  long history of excessive coziness with Republican politicians and organizations offers little reassurance.

I hoped to ask Barnes whether he agrees that being on the team payroll means he is indeed "on the team" -- the Republican Party team. Understandably, he may prefer not to respond. But he ought to reflect on his standing to criticize the behavior of other journalists, left or right, before he mounts his high horse again.