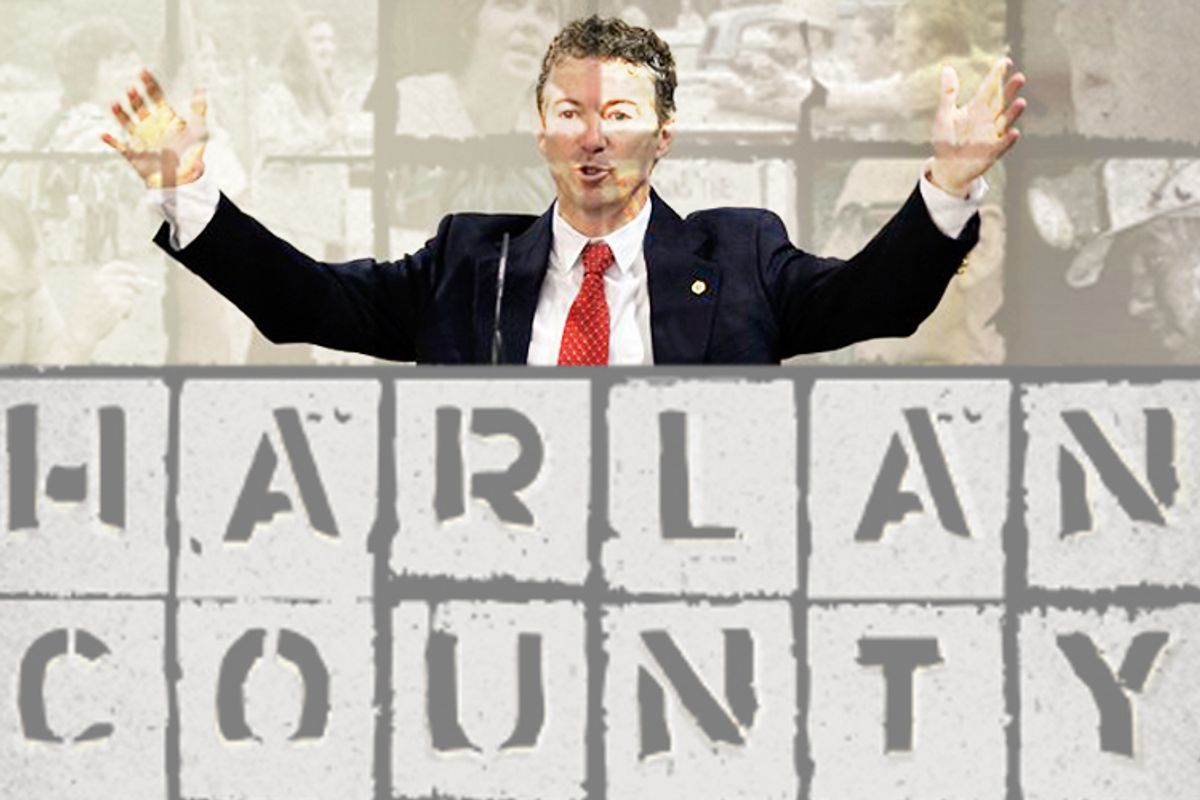 Next month's Details magazine has a profile of exciting Republican Senate candidate Rand Paul, the Republican libertarian who no longer speaks to the national press, because they keep trying to make him defend his beliefs, and he is not very good at that, because he is, I think, kind of dumb.

TPM digs in and finds that Paul supports mountaintop-removal coal mining. He thinks, of course, that it should be left up to private landowners, but he also thinks that flattening mountains makes them prettier and creates some really nice land that can be used to make a "sports complex."

But I found this bit much more illuminating. Driving through Harlan County, the site of a hundred years of bitter, bloody labor disputes, Paul reveals the breadth of his knowledge of Kentucky history:

Rand Paul and I are trying to remember why Harlan, Kentucky, might be famous. That's where Paul is driving me, on a coiling back road through the low green mountains of the state's southeastern corner, in his big black GMC Yukon festooned with RON PAUL 2008 and RAND PAUL 2010 stickers. Something about Harlan has lodged itself in my brain the way a shard of barbecue gets stuck in one's teeth, and I've asked Paul for help. "I don't know," he says in an elusive accent that's not quite southern and not quite not-southern. The town of Hazard is nearby, he notes: "It's famous for, like, The Dukes of Hazzard."

"Maybe for some of the coal battles," a young campaign aide in the back seat suggests.

Paul ignores this. "Maybe the feuding," he offers. He mulls this for a moment and says, "The Hatfields and McCoys were more up toward West Virginia, though."

"I think it was the coal battles," the aide says.

I've got nothing bad to say about the television classic "The Dukes of Hazzard." But, Rand, "Harlan County, USA" is on the Netflix Instant Watch. You should check it out! The music is pretty great, and you might learn something. Something that might conflict with your inherited and obviously never-questioned philosophy of the righteousness of the profit motive.