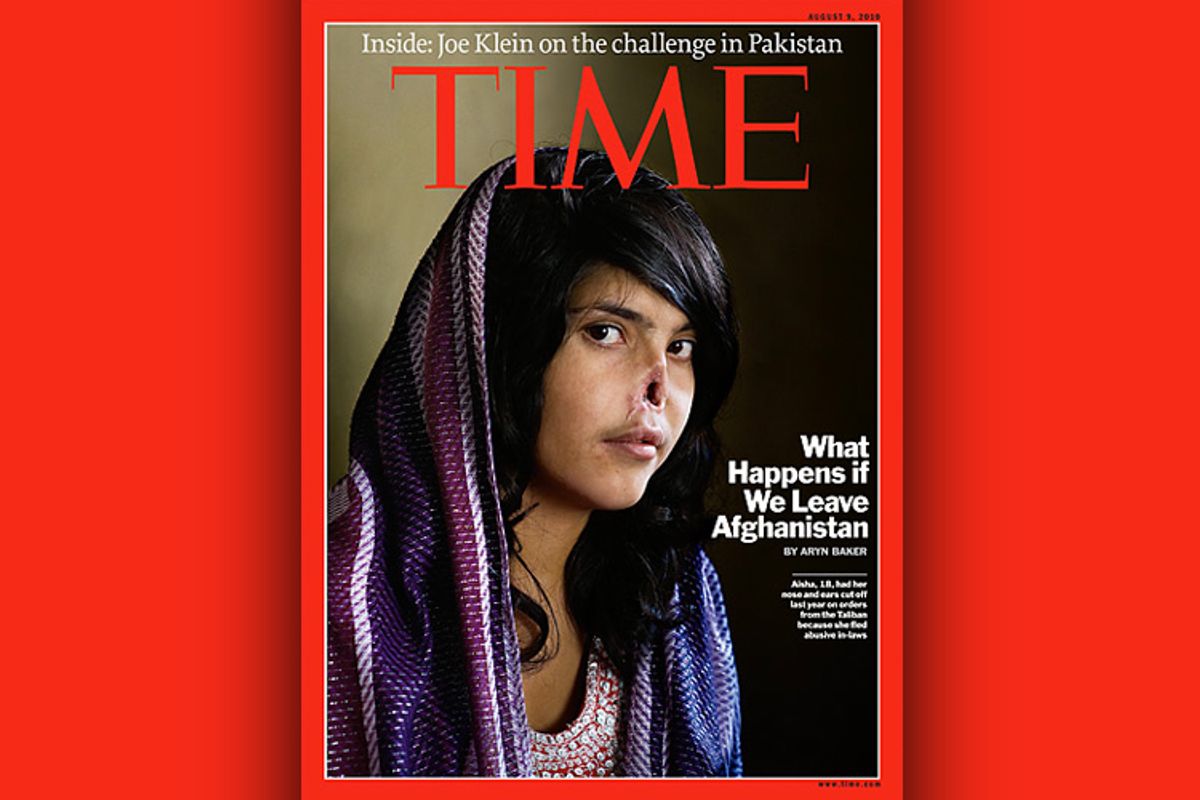 iShe looks in many ways eerily similar to the girl who graced one of National Geographic's most famous covers back in 1985. Like her, she is young, beautiful and Afghan. She looks at us slightly sideways, her bold gaze a contrast to her modestly covered hair. But 18-year-old Aisha, the arresting figure on the cover of the new issue of Time, is very different. After attempting to flee her abusive in-laws, Aisha was sentenced by the Taliban to become a cautionary tale to other girls in her village. While her brother-in-law held her down, her husband cut off her nose and ears. The provocative coverline? "What Happens If We Leave Afghanistan."

The use of incendiary imagery is a popular and reliably attention-getting journalistic gambit. It's also one fraught with conflict. Which takes precedence: the right for the public to know or its desire to not be offended? Is the dissemination of photos from Abu Ghraib or a video of Neda Agha-Soltan taking her last breath responsible journalism or exploitation? And, for the rest of us, is seeing them a duty or an uninvited intrusion?

In his online editorial on the cover story, Time managing editor Richard Stengel says, "I thought long and hard about whether to put this image on the cover of TIME ... I would rather confront readers with the Taliban's treatment of women than ignore it. I would rather people know that reality as they make up their minds about what the U.S. and its allies should do in Afghanistan."

Jodie Bieber's stunning images of wives, mothers, prisoners, widows and one ravaged burn victim -- along with Aryn Baker's accompanying story on the plight of women living under the Taliban -- are unforgettable.  But as traditional newsstand magazines face declining sales,  and just one day after All Things Digital reported on Time Inc's frustration in getting iPad subscriptions off the ground, it's reasonable to wonder if Aisha represents not just the brutality of the Taliban but the desperation of old media.

That cover image is an unforgettable depiction of a horrible crime. It's also a reminder. When was the last time your newsstand had anything on it that could stop you in your tracks, could make you feel something -- horror, outrage, disgust? When was the last time you gave a damn about any magazine cover that didn't feature Brooklyn Decker?  Time is the publication that, earlier this month, put Thomas Edison on the cover, for Pete's sake. In a news media dominated by nip slips and shocking death ("Caught on tape!") those magazines your parents still get in their mailboxes have remained decorously safe.

So has Time swung too far in the other direction now, with a cover that prompted Stengel to butt-coveringly write, "I apologize to readers who find the image too strong, and invite you to comment on the image's impact"? Given the overwhelming support for it in the comments so far, with readers calling it "compelling," "what photojournalism is all about" and "the best cover out of Afghanistan war," the answer would seem to be an passionate no.

But this isn't quite photojournalism. Aisha, who is currently living in hiding and heading soon to the States for reconstructive surgery, posed for a portrait. She wasn't captured in a Robert Capa moment. She chose to be part of a story, one that is based on the headline, that certainly has a clear-cut perspective.

That journalism is without bias is a myth. And whether it's an artfully posed portrait or a Viet Cong prisoner with a gun to his temple, the act of documenting and selectively presenting an image imbues it chock-full of agenda.

Does the picture of a young girl, savagely mutilated by her own husband, tell us something real and important? I believe it does, more than a score of stories on the subject. But whether we can bear to look at a pelican flailing in oil or Beijing man standing in front of tank doesn't necessarily change what happens to them. And I wonder if the mere act of looking instills in some of us the comforting sense that we've done our part, simply by experiencing the cathartic moment. To look or look away isn't itself a moral choice. It's what happens next that matters. And we can applaud Time for getting out of its comfort zone and doing something bold and still feel uneasy at the amount of business calculation that might have gone into the decision to do so. Aisha is a survivor of atrocity. She's a tool of persuasion. And she's a hell of a photograph.