Ellen and Kara rumored out, while J.Lo, Steven Tyler are in. Can this show soldier on with Randy as sole survivor? 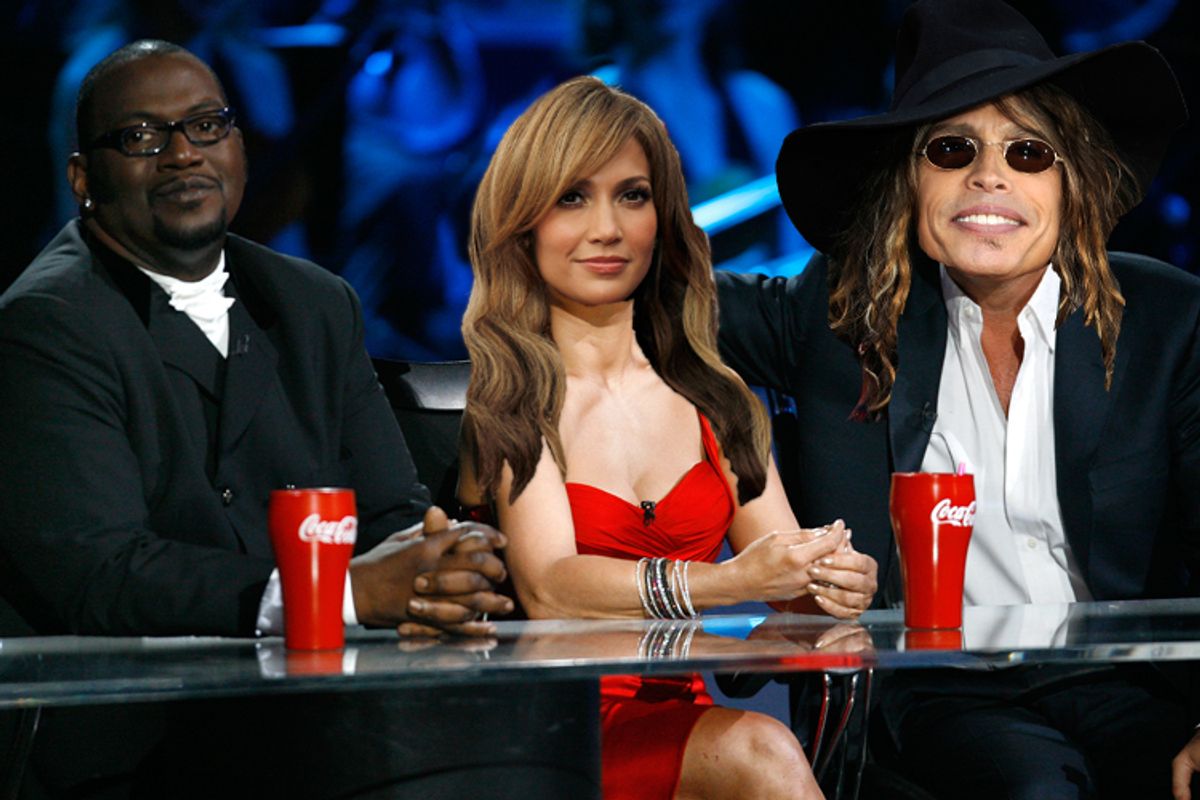 I watched the first three seasons of "American Idol" with religious fervor, possibly because I'm a former high school chorus geek with a dangerously high tolerance for saucer-eyed nymphs warbling Disney ballads, or possibly because I was dating a TV addict with an inner showtunes-adoring gay man trapped deep inside of him. One thing was clear back in 2002: You lose Simon Cowell, this show jumps the shark.

Losing Paula Abdul, on the other hand, wasn't even close to tragic. As a judge, Paula was never exactly skilled at stringing sentences together to form coherent thoughts. Like some of those Disney-ballad-warbling nymphs I knew in high school, Paula had a nice smile and liked cute boys – sometimes enough to allegedly tutor them privately. But beyond getting squeakily outraged over something Simon said, Paula's air time was dead air. Typically, I'd listen to a few words from Randy ("Right on, Dog. You did your thing.") then fast-forward straight to Simon ("You sounded like a cat in heat.")

Obviously replacing Paula with Ellen DeGeneres was a huge coup for the show, but that victory was soon followed by a devastating defeat: Simon Cowell would be leaving paradise… forever.

Now, just as the Idol-adoring masses have stopped tearing their hair and wailing inconsolably at the gods above over Simon's departure, news has emerged that Ellen is also leaving the show, and Kara DioGuardi's contract may not be renewed either. Replacing Simon, Ellen and Kara? J. Lo and Steven Tyler.

That's right: Randy Jackson will be the last judge standing, flanked by two overstyled, overexposed, rewarmed celebrity bobbleheads. Has Jenny on the block ever said anything sharp or witty on the record since she dragged her juicy, designer-festooned Fly Girl frame in front of a national audience almost two decades ago? Does someone with a skin routine as elaborate and expensive as hers really belong in a chair for six hours at a time, sipping an enormous tumbler of Coca-Cola? Won't just looking at Steven Tyler's face for that long age her visibly?

With all of the other smart, sharp-tongued camera-loving extroverts in the universe, I just can't believe that we're going to be forced to listen to J. Lo and Steven Tyler prattle on each week. J. Lo giggles with Tyler, Tyler gently ribs Randy? Are you kidding me?

And so, just as "American Idol" went from a quirky, dorky little show (two words: Brian Dunkelman) that somehow morphed into a gigantic monster hit overnight, the show will now go from monster hit to monster movie remake with C-list cast and visibly amateurish special effects. Or think of your favorite TV shows that linger on, even though only the least likable cast member remains. Feeling queasy yet? I mean, Randy, the sole survivor? How is that possible?

The big announcement on the new judge line-up won't come until Monday at the Fox TCA panel, but never mind that. It's already official: "American Idol" has jumped the "Jaws."