The $2 camisole: How cheap is ruining our lives

I love a good deal, but as consumer prices keep hitting rock bottom, this is just getting scary 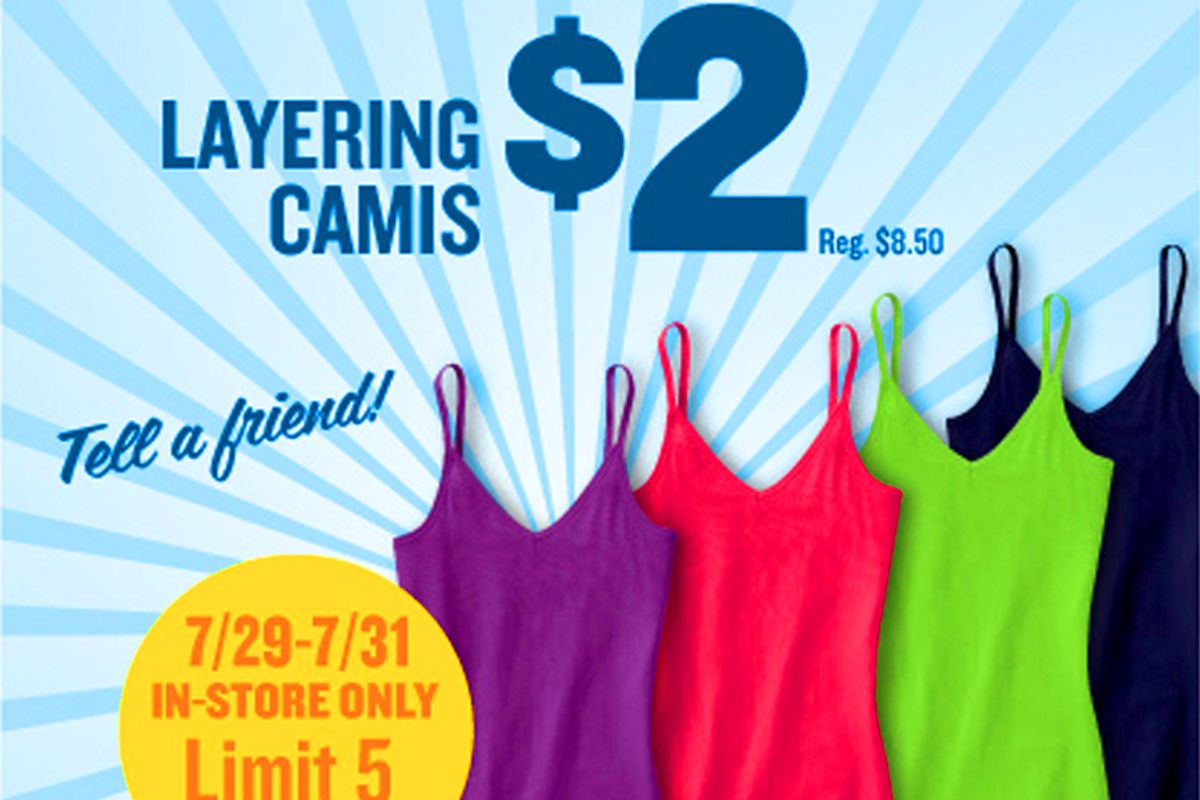 I looked at the price and thought, this is outrageous. This is far, far too little to pay. The heads up had come Thursday via one of the bargain blogs I regularly peruse, the notice that Old Navy was practically giving away camisoles for $2.  Minutes later, the news broke that Amazon was launching a $139 Kindle, well under half its original cost. So why does this information, instead of making me want to run out and burn up some plastic, fill me with dread? It's not that I enjoy paying more, it's just that shouldn't some things -- like sushi, stereo systems and brand-new clothes -- be valued more?

Our collective mania for low, low prices has been frothing for years now, fueled by morally dubious manufacturing practices, aggressive marketing and a crap economy. But as Stephanie Zacharek pointed out last year regarding Ellen Ruppel's "Cheap: The High Cost of Discount Culture," those bargains come at a cost -- to workers here and abroad, to the environment, and to our own increasingly superficial relationship with our possessions. As your mom used to say, this is why we can't have nice things.

I'm no stranger to the allure of rock-bottom prices. My usual response to a compliment on my dress is to proudly blurt how much I paid for it. So why not go out and get that $2 camisole? It's Friday, after all. I could go out tonight, drip grease from a Taco Bell $2 Meal Deal all over it with abandon, rip it off later in the throes of Gordita Supreme-induced passion, throw the damn thing away, and just toss on a brand-new $2 cami in the morning. OK, that actually does sound like a pretty awesome $6 kickoff to the weekend, but it can't be good. Who made that $2 shirt? And what the hell goes into a $2 meal -- puppy blood and child labor?

It's not as if too many of us are living too large these days. And it's hard to stave off a big fat eye roll when some more-prosperous-than-thou acquaintance talks about buying only organic and getting those "investment piece" garments when your own lifestyle is long on shabby, short on chic. I pay too much for housing, movie tickets and prescription medications. But paying too little for an umbrella that falls apart after one windy outing doesn't mitigate that. It only adds up to a hundred dollar a year umbrella habit. (Oh, and doesn't the store that sells them just know it?)

I recently watched the pair of sunglasses I bought with an H&M store credit crack in half in my hands. I must have roughed them up putting them on my face too hard. They were two weeks old. Earlier this year, my family replaced the falling-off-the-wall IKEA kitchen cabinets that were brand-new when we moved into our home -- four years ago. I go through printers faster than I do ink. And by the time my iPhone was 2 years old, it looked like a rotary next to what everybody else in town was carrying around. It was cracked and dented, but it worked. I got a new one when it was stolen. It sucks.

There has to be a middle way. I just want the price of an item to be a reasonable reflection of the effort that went into its creation and the use I will get out of it. I have a wardrobe cobbled together off the clearance rack of TJ Maxx, a home furnished in no small part with stuff picked off the curb and a fridge full of stuff bought on weekly special. It's not exactly back to the land living, but it gives my family an occasional fighting shot at somewhat more durable, satisfying goods. It's harder to do semi-right with home items -- especially when I can get a new coffee maker for less than the price of replacing its broken carafe. It's harder still if you're like me and have a flair for staining and/or shattering everything you touch. The temptation of "why bother?" is great.

But I'm tired of throwing junk away. Tired of feeling like the expiration date on my clothes and toasters gets shorter and shorter every time I replace something. And while I know that spending $7,000 on a Viking range is a not-going-to-happen-in-my-lifetime experience, I'm sure I don't want to spend $268 on one from Sears that I'll have to throw out next year. Not everything needs to be a Buddhist-level lesson in the transience of life and the need for non-attachment, a cue for a "Goddammit, I just bought this!" This winter I purchased a mid-century steel tanker desk for about the cost of a new one from Staples. Everything on top of it is less than 5 years old. It's dinged up and a little ugly. And someday, I'm giving it to my daughter.