I never thought I'd be another single black mother

At 31, I felt stuck between two cliches: Being unmarried and alone, or having a child by myself 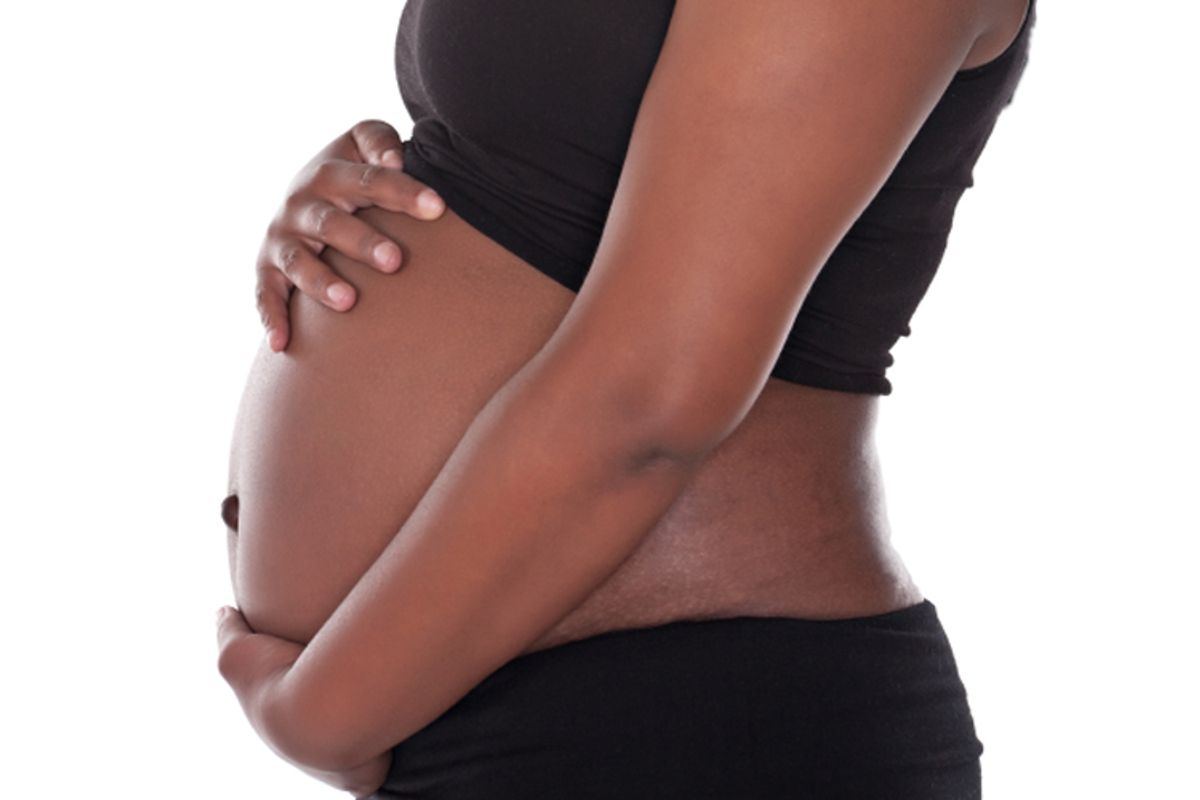 It was raining when I left Michael's townhouse that Wednesday morning, Jan. 2, 2002. I had less than 10 minutes to get from Vienna, Va., to my job in D.C. I would be late for sure, but I didn't care. My life had changed forever. I knew even then, hours after the fact, that I was pregnant. As I navigated the Beltway gridlock, I wondered where I could get an E.P.T. along the way. It's too early. I'll have to wait a few weeks.

It wasn't like me to have unprotected sex with a near stranger. As a germophobic nervous nelly, the fear of getting an STD had always loomed large in my life. I should have been ringing my hands, imagining a slow, painful death from AIDS. Instead, I was thinking about names. It's a girl, I just know it. Dylan, Grace, Zoe ... By the time I arrived at work, I had grappled with my fears and doubts and made a firm decision: I must have this child. It's time.

Every woman is born with a set of hopeful eggs stamped with a "best if used by" date. You don't know exactly when that date is, but by the time you hit your 30s you know it's drawing near. Yet, there was no potential husband in sight. I hated to think of myself in statistical terms, but there I was at 31, one of the 43 percent of black women in this country who had never been married. I began to notice families, all over town. They were at the market, at the mall -- happy couples with their adorable tots in tow. My envy ran deep. Single motherhood was never in my plans. It was just so ... typical. But it seemed like a minor detail now. At least I wouldn't find myself at 50, childless and full of regret.

I had met Michael on Black Planet, an ethnocentric dating website. We started chatting sometime around Thanksgiving. He looked great on paper -- an excellent prospect. It had been a long, lonely 18 months since my last relationship, so by the time I met him, I was ready to hope again. So ready, in fact, that I ignored some obvious warning signs. We had our first date after talking endlessly on the phone for several weeks. By our second date, I knew he was a neurotic narcissist, and a pathological liar. On our third date, New Year's Night 2002, we conceived a child.

Though I was committed to my course, I knew there was another person to consider in all this. Did the father have a right to know? I wasn't sure he did, but what about the child? One day she would start asking questions. How could I say I never bothered to tell him? She wouldn't understand. So, I finally called him one day and blurted it out, hurriedly explaining that there was no obligation, financial or otherwise. He feigned interest at first, mumbling something about how fatherhood was a privilege. Then I never heard from him again. This was perfectly fine with me. In fact, I considered myself lucky for it. This was my enterprise and mine alone.

About a month before my due date, I can remember sitting in my sunny bedroom -- despairing. All the doubts I had been suppressing were suddenly closing in on me. To make matters worse, the Beltway sniper was terrorizing my neighborhood. I could just see the headline: "Unmarried pregnant woman, shot dead at the Sunoco station in Takoma Park." I had an apartment with large windows throughout, a terrific view overlooking Sligo Creek. There I sat, watching the water rush over the rocks below, entranced, thinking about the prospect of raising my child alone.

I was born and raised in the Pacific Northwest, so all my close friends and family were 3,000 miles away. There was a real possibility that I would have to face the maternity ward alone. My dad offered to come, but I wouldn't have it. I was barely speaking to him then, still smarting from an epic row we'd had three years prior. We have since reconciled, but at the time, I wasn't ready. I knew he would try to insist, so I lied.

"Thanks, Dad, but I'm fine. My girlfriend from work will be there."

In a perfect world, my cousin Pam would have been the one to see me through my labor and delivery. Though only in her early 40s, she had been the family matriarch for as long as I could remember, and had even helped to raise me. But I couldn't expect her to be there this time. Her husband was suffering through his last few weeks of life. His lung cancer had spread to his brain, and the prognosis was about as bad as it could get. Pam had three teenage girls in the house, and was working two jobs just to keep her head above water. I just couldn't add another crumb to her plate. So, once again, I lied.

"Girl, you cannot have this baby by yourself. I will figure out a way to get there in time."

"Don't worry, Pam. My friend from work will be there."

"But what if you can't find her when you're ready? Do you have a backup plan?"

She was distracted, or she would have seen right through me.

Despite all of my talk of independence and self-reliance, I didn't really want to go it alone. I had one last hope: The Lady E, my best friend and sister-soul mate. But though she desperately wanted to be there, she was far away in Oakland, Calif., and flat broke. Neither one of us had plane fare, but she had an idea. She had worked her way through Berkeley as an exotic dancer. After  graduation, she swore she would never dance again, but this was an emergency. I needed her, so she resumed her alter ego "Cotton Candy," and pulled on her go-go boots for one last hurrah. When she phoned two weeks before my due date, I burst into tears at the sound of her voice.

As it turned out, I was almost a week late when The Lady E arrived on Wednesday, Oct. 2. She just had to get back to work by the following Monday, no matter what. I explained the situation to my doctor and begged her to induce my labor. She was reluctant, but promised that if I didn't go into labor by Friday, she would see what she could do to help me out. I had heard that walking helped to stimulate labor, so I walked and walked for two days. We shopped for the baby, took nature walks along the leafy, wooded creek path around my place. Then we shopped some more. We were both exhausted, but it must have worked. I went into labor on my own, early Friday morning, Oct. 4, 2002.

At last, it was my time. Once I got to the hospital, the day went by in a blur. I had no intention of bringing my child into the world "naturally." I wanted all the drugs I could get, and I made it known to all who would listen. The first thing they gave me was demerol -- straight to the vein. It made me thick-tongued and hazy. But it also took the edge off my pain and frazzled nerves. For a while, the labor was going along smoothly, easier than I expected. Then everything changed when the baby's heartbeat became erratic. They had to give me oxytocin to speed up the process; it was only then that I knew what real pain was. Here's the thing about contractions: When they come, the pain is so intense you think you can't bear it. But then you get a break, a chance to catch your breath. It really wasn't so bad until they gave me that evil drip, that oxywhatever. After that, things got ugly.

The contractions started coming faster and faster until it seemed like they were almost constant. I had just enough time to throw up and curse the gods before another one hit me. Lady E was a rock. She tried her best to assist me with my breathing. She even held my vomit bowl at the ready, The Lady E, with her famously weak stomach. She would normally run in the other direction if she had any inkling someone might be ready to hurl. But there she was, dutifully holding that little pink, crescent-shaped bowl without so much as a flinch. I will never forget her loving expression in those moments.

I was lucky for a first-timer. My labor was only eight hours compared to the average 15, but to me it seemed like an eternity. Once I was sufficiently dilated, a little Asian man came into the room and talked my head off about the epidural process. I couldn't catch my breath, but I so wanted to tell him to shut it. I had read everything I could get my hands on about labor and delivery, and seen at least a hundred episodes of "Birthday," on the Learning Channel. As far as I was concerned, I knew more about the procedure than he did.

Finally, he gave me a big, fluffy pillow and told me to lean over it and expose my back. I tried to focus on a fixed spot in the green and blue speckled linoleum -- anything to avoid visualizing that gigantic needle, but it wasn't so bad. The insertion went smoothly, and once the anesthesia kicked in, I was on easy street. It was as if my lower body had ceased to exist. The nurse instructed me to push with the contractions, but with no sensation in my lower body, this was no easy task.

"Watch the monitor," she said. "When the needle starts to spike, push."

My little Sophia had finally arrived. In a flash, the doctor put this warm, wiggly thing on my chest for a few seconds before whisking her away to be weighed, measured, cleaned and serviced. Oddly, the thing I think I remember most about that moment was the delicious smell of her. All those deliveries I had seen on "Birthday," the babies were covered in this pinkish goo. I just knew it would be smelly. But it wasn't. It was the sweetest, most wholesome smell you can imagine -- like fresh spring water and dryer sheets. Everything that happened before that moment -- the pain, the fear -- was a distant memory.

We drove The Lady E to the airport on Sunday morning. Sophia was so quiet on the way home, that I kept looking back at her through the rearview mirror. How odd to have a baby on board. When we arrived home, it felt like a momentous occasion, the first day of our life together. Just the two of us. I was at once exalted and panic stricken. OK, so I've cooked up this little creature -- and isn't she lovely -- but now what? I looked into her squinty little eyes, the first time I really got a good look at her. "We'll figure something out."