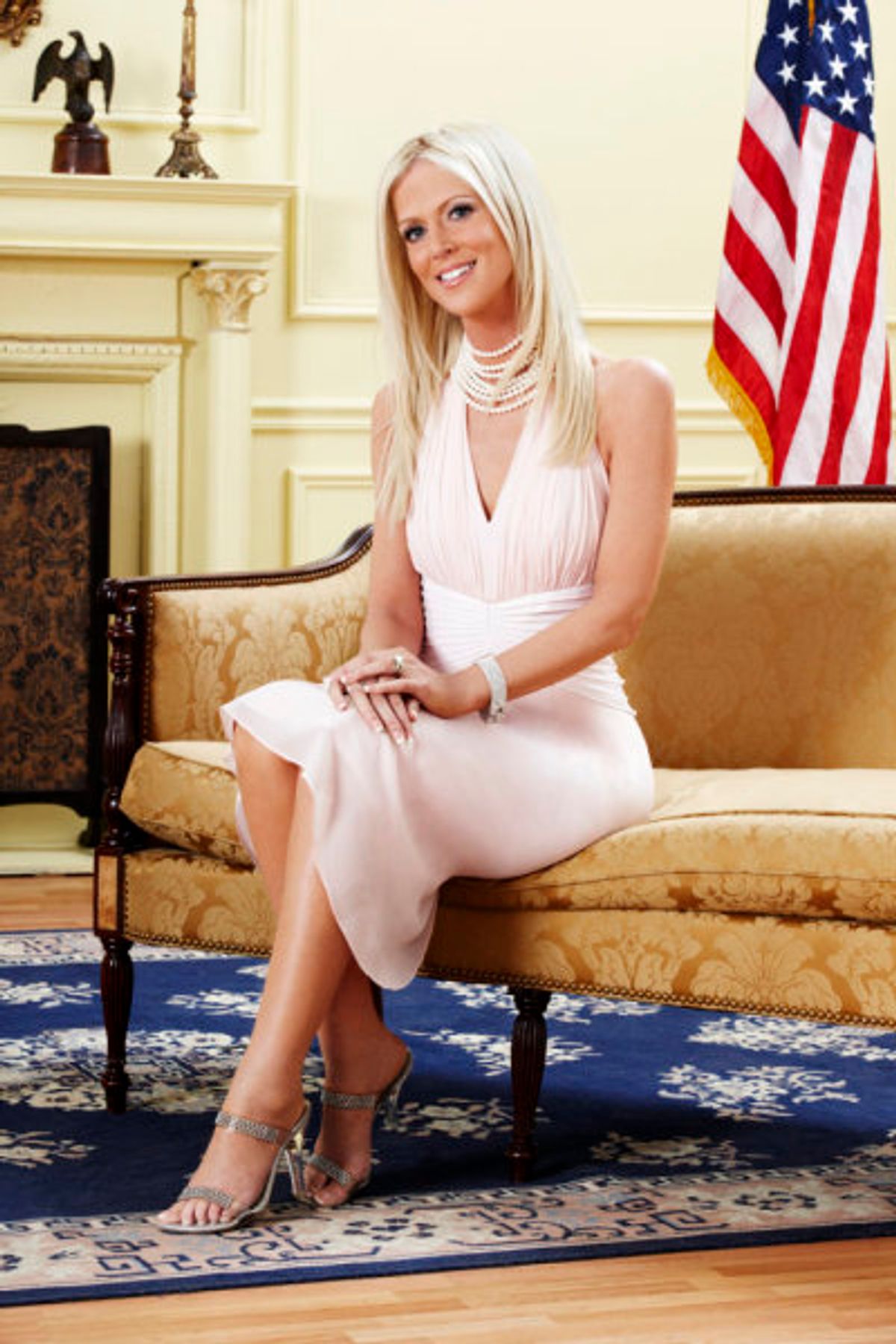 I envy them. They have exactly what I need: a worthy target for my unfocused spite. Without an easy scapegoat in my sights, what happens? Innocent husbands get criticized for the shoddy way they wrapped up the pork loin, causing it to bleed all over the vegetable bin. Innocent little doggies get snapped at for dragging their innocent butts across the fluffy shag carpet, which they believe was purchased for that purpose. Innocent little children aren't sung the "Wizard of Oz" songbook at the dinner table because Mommy is searching for something new to complain about instead.

This is where the "Real Housewives" franchise comes into play: Instead of needing an actual arrogant boss or nosy neighbor or meddling ex-girlfriend in your life, you can hate the filthy rich, self-involved, surgically sculpted social climbers on your TV screen each week. It's engaging, it's cathartic, and no innocent animals get their feelings hurt along the way. In fact, it's just like high school: You listen to everyone's self-deluded, vainglorious stories, and then you choose teams.

Of course, the really enjoyable thing about the first few episode of a brand-new "Housewives" spinoff is that the various preening, self-important debutantes on our TV screens are scrambling to choose teams as well. So for those of you shopping around for a new enemy or five, here's my pre-season breakdown of "The Real Housewives of D.C." (premieres 9 p.m. Thursday, Aug. 5, on Bravo).

Michaele Salahi: You've met this woman before, probably at that sorority function that made you swear off sisterhood forever. Salahi is one of those very thin, very blond women with a growly voice who's always smiling and telling everyone she loves them -- distractedly. Then she's off, flouncing here, fluttering there, leaning in and giving this or that imaginary friend a squeeze before something shiny catches her eye across the room ... like Vice President Joe Biden, for example.

See that hand placed intimately on the vice-president's chest, as if to indicate to those who don't know better that Biden is godfather to Michaele's dog or gave her a spare kidney or wrote her a glowing recommendation for a hostess job at Applebee's? That's the genius of this woman. She broadcasts such a steady flow of love-love-love for everyone and everything that no one has time to say, "Get your bejeweled paws off my suit." Or "Who the hell are you anyway?" or "Code red! Security breach! Get POTUS out of the building, stat!"

If Michaele and her husband can bluff their way into the White House, there's no telling what tricks the little bony dynamo has up her sleeve. But my gut feeling tells me right now: Whatever Team Salahi is on? Choose the other one.

Mary Schmidt Amons: This probably-about-45-year-old mom looks like she's the same age as her teenage daughters, disturbing but also provocative: What kind of expensive biochemistry is in the mix here? She has five sassy children and a sassy husband whom she occasionally addresses as if he's her naughtiest child. Again, disturbing but provocative: What does this man do for a living? At a terrible family photo shoot, in which the whole clan squeeze their heads or their toes together and giggle, mom explains to the photographer that she and Dad will be drinking wine to stay relaxed. Then the teenagers ham it up for the photographer individually, a sight that ... Look, no matter how rich you get, just don't put your teenagers or small children in front of a professional camera. It's Sears portrait, Olan Mills or nothing. Anything more than that -- stylists, white backdrops, beleaguered art photographers on ladders, grimacing through zany family moments -- is just unseemly.

And the wine. It seems that most of the D.C. housewives will only appear in front of the camera if there's a giant wineglass in their hands. Maybe it's in their contracts. Who knows? Wine is to D.C. socialites what Chevy's margaritas are to the real Orange County sea donkeys.

Anyway, Mary is showing polite restraint now, but some of her personality flaws are looming in the shadows, quite clearly anxious to rear their hideous heads. For example, Mary has a finger-activated bio-lock on her humongous walk-in closet door, so that none of her daughters (some of whom wear the same size as her, don't you know) can steal her fabulous designer clothes. I don't want to imply that mothers should feel that they need to share everything with their children just because they already share their long, glossy hair, lithe bodies and tight, shiny, youthful faces with them. But really, locking your stuff up so your children can't touch it? Unless you're an automatic weapons enthusiast, that's some creepy shit.

Did I mention that Mary appears to get wasted at one of the show's first filmed events, and then lectures two African-Americans on the need to desegregate -- wait for it -- hair salons? See what happens when white people who want more token black friends drink too much?

Lynda Erkiletian: Model-agency owner Lynda, on the other hand, not only doesn't seem to drink too much, but she has a young, tall, gorgeous Nigerian boyfriend, one who's hot enough to make most women wish they were middle-aged divorcees. Lynda herself appears to have had that familiar flavor of face-lift that makes women look just like sex-crazed puppet Madame.

Thankfully, though, Lynda seems poised to play the troublemaker here, and who's in her sights but sunshiney rainbow girl Michaele? First Lynda refers to Michaele's polo event as "that goat rodeo." Then she goes out of her way to tell Michaele's stylist that Michaele looks too thin and has entered the "danger zone." Maybe Lynda is a little bit too invested in making Michaele look bad, or maybe she saw "Top Gun" one too many times, but either way, we like the cut of her jib right off the bat.

Plus, when she's on camera, Ebong is often there, too. Ebong. Imagine looking that good and having a name that sounds like it was dreamed up by a stoned programmer during the dot-com bubble. I'm on Team Lynda, without a doubt.

Catherine Ommanney: At first I like Catherine, known as "Cat." She says exactly what she thinks and she has a plucky British accent. But then she's invited to Stacie's house for a cooking demonstration, and within a few minutes (and a few drinks), she's 1) insulting Tyra Banks (OK, fine, I get it, but the guest chef just said he worked for her and acted like she was a friend), b) bitching about the fact that President Obama didn't RSVP to her wedding (Earth to Self-proclaimed Center of the Universe: The man is a little busy) and c) blathering endlessly about her photographer husband's unprecedented access to his buddy Biden and his other (albeit sort of rude) buddy Obama and his bestest bestie in the whole wide world, George W. Bush.

Blech. Of course, this is exactly the response a Real Housewife should elicit, ideally, and it's a sign that this is going to be an invigorating season. After all, think of the brightest stars of Bravo: Jeff Lewis. Rachel Zoe. Bethenny Frankel. What do these people have in common? They love themselves a lot. They talk way too much. And they have a curious tendency to get increasing boisterous and opinionated every time that little red light blinks on the camera.

Obviously every "Housewives" spinoff needs a few bad seeds to create chaos among these ultimately fragile, insecure, undomesticated wildebeests. A "Real Housewives" spinoff without a few instigators is like "Jersey Shore" without spray tans: unthinkable. But Cat already seems so over-the-top arrogant that she's sort of roasting the golden goose before it's time to feast. The best villains are the ones who smile politely, then slink out of the shadows and slit your throat. While Cat practically announces her eeevil nature through a megaphone and Michaele trotted out her nefarious shenanigans in front of a national media audience, hopefully Lynda or Mary can try to build a little more suspense before they strike.

Stacie Scott Turner: The only African-American D.C. housewife also seems to be the only completely sane D.C. housewife, turning the traditional Find-Me-A-Crazy-Black-Woman-To-Set-Off reality casting formula on its head. Stacie has a Harvard MBA, a nice husband, cool friends and -- because she's sensible -- an immediate disdain for Cat. In other words, Stacie has been planted here to play the rational observer. She raises her eyebrows. She shakes her head. She sighs. Of Cat, she merely says, "Not a fan."

Stacie will model restraint for us. A show full of Stacies? Not very exciting. But one Stacie? Well, that's like having a likable, lively, not-insane friend along for the ride – one who hates all of the same people you do. And that's what life is all about, isn't it? Savoring your disdain for your enemies together?

Man, it feels good to have enemies again -- even if they are only imaginary.