This week in crazy: Oliver Stone

His comments about Jews and the Holocaust kicked up outrage, but wait till you hear about the rest of the interview 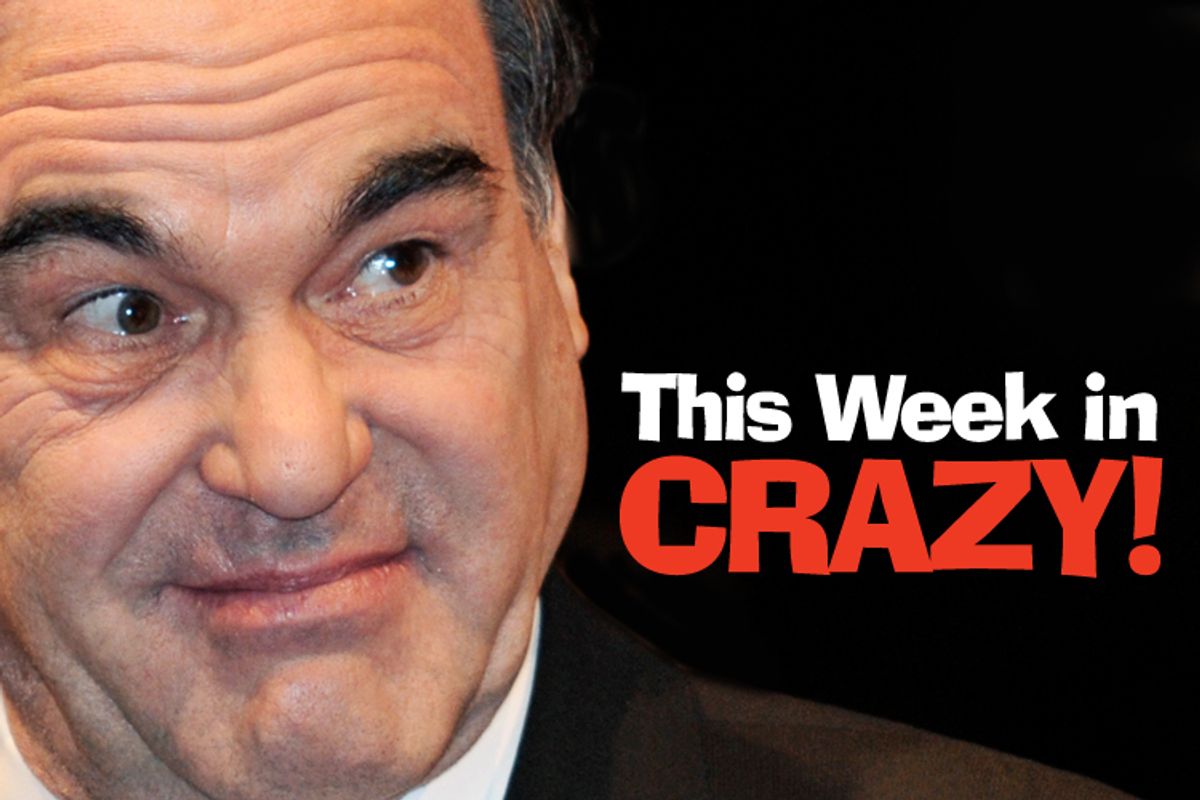 It's not as if Oliver Stone has been dazzling us with his sense of decorum and totally rational behavior all these years. The man who once signed a letter comparing Germany's treatment of Scientologists to its treatment of Jews? The world's leading JFK assassination conspiracy theorist? Frankly we could just stop at "the guy who based 'Scarface' on his own experiences with coke." (Seriously. Have you seen "Scarface"?) But this week, the critically acclaimed Oscar winner really jumped the crazy shark.

In a Sunday newspaper interview read 'round the world, Stone cavalierly told the U.K. Times about the "Jewish domination of the media" and stated that Israel "fucked up United States foreign policy for years." The director, who promised his "Secret History of America" documentary would present Hitler and Stalin "in context," went on to assert, "Hitler was a Frankenstein, but there was also a Dr. Frankenstein. German industrialists, the Americans and the British. He had a lot of support. Hitler did far more damage to the Russians than the Jewish people."

Oh, boy. This coming six months after explaining that Adolf Hitler was "an easy scapegoat" and that "We can't judge people as only 'bad' or 'good'" didn't go over so well. And the tiny mustache he's been carrying around his face lately didn't help matters either.

The American Jewish Committee swiftly said Stone had "outed himself as an anti-Semite," while the Anti-Defamation League's national director Abraham Forman said, "Oliver Stone has once again shown his conspiratorial colors ... His words conjure up some of the most stereotypical and conspiratorial notions of undue Jewish power and influence."

By Monday, Stone had moved into heavy-duty damage control mode, issuing a statement that, "In trying to make a broader historical point about the range of atrocities the Germans committed against many people, I made a clumsy association about the Holocaust, for which I am sorry and I regret … Jews obviously do not control media or any other industry. The fact that the Holocaust is still a very important, vivid and current matter today is, in fact, a great credit to the very hard work of a broad coalition of people committed to the remembrance of this atrocity -- and it was an atrocity." He then apologized directly to the ADL, saying, "I want you to know that I am categorically opposed to anti-Semitism -- and all other racist ideologies."

He was forthright, clear and unequivocal. Good one, Stone. It's not as if his original comments were 100 percent crackpot either. Stone's plea for exploring history, and the circumstances that lead to devastating atrocities, is a perfectly sensible one. And reminding the world that Hitler was not a supernatural, Freddy Krueger-like monster but a man is a good starting place for understanding the most horrific aspects of human nature. Hitler wasn't Voldemort -- and that's exactly what makes men like him so scary.

Why, then, does Stone still merit our Crazy crown of the week? Because his recent comments, the ones for which he has atoned, have been mostly bandied around secondhand, hidden behind the U.K. Times paywall. But you know what? For two bucks, you can read the whole thing. And it's a doozy. Forget the Holocaust stuff. What about his admission that he openly admired another journalist's bra the week before? "Oh yeah, that got around." His assessment of his wife? "She eats like a HORSE! Thank GOD she doesn’t look like one." His narrative of how he killed a guy in Vietnam? "Yeah, he died. I’ve got a good lob." His admiration for Venezuelan president Hugo Chavez, no slouch when it comes to racking up human rights complaints: "A brave, blunt, earthy" man, he called him. "High School Musical"? "Bullshit." And for a kicker, Stone, who has previously met with Iranian president and Holocaust denier Mahmoud Ahmadinejad, added, "Iran isn't necessarily the good guy, but we don't know the full story."

See, it's like Hitler. You have to take these things in context. Crazy, crazy context. We're glad that Stone has made a game attempt at amends for his most insensitive remarks. But sir, until you rethink your position on "High School Musical," you're still nuts in our book.