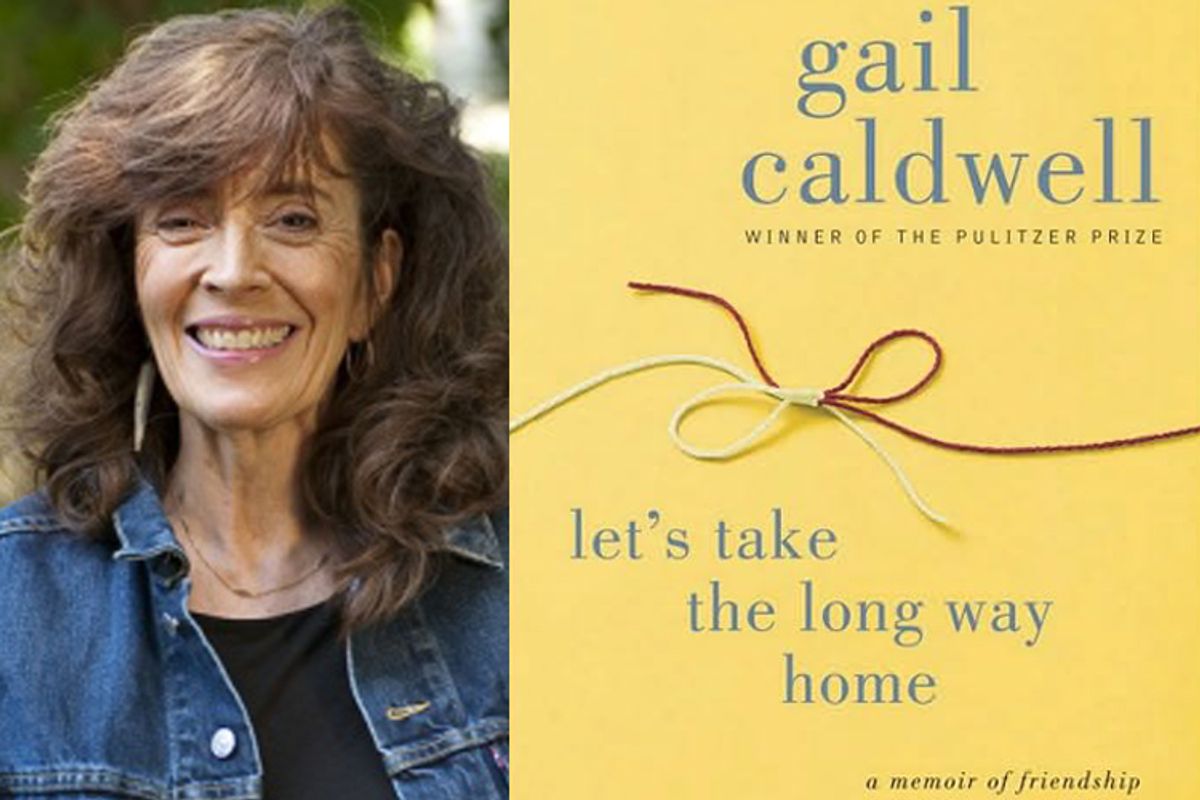 Grief memoirs are always a bit startling when they come from a familiar writer. The voice that usually tells you about movies or politics or California is suddenly talking about the private, terrible thing you thought, irrationally, was yours alone. If the memoir is all you know of the writer, then he's that man whose wife died or she's that woman whose father killed himself. But when Joan Didion writes about losing her husband in "The Year of Magical Thinking," we understand that neither talent nor success -- not even legendary literary sang froid -- is talisman against it: Sooner or later every one of us is that man or that woman.

As the Pulitzer Prize-winning critic Gail Caldwell observes in her new memoir, "Let's Take the Long Way Home," profound grief, like the pain of childbirth, is something we're mostly "wired to forget" because we couldn't go on if we knew it was waiting for us out there somewhere. "Remembering the suck and force of death," she writes, "is like trying to hold water in your hand." Emotionally, it's another country, one we hope to visit rarely. And so, when we do arrive on its shore, we're foolishly amazed to learn that some literary idol like Didion or C.S. Lewis has been there, too, and can describe it so exactly. In better times, we give their memoirs to bereaved friends because these books can provide them with a kind of companionship that we, for all our sympathy, can only offer from afar.

"Let's Take the Long Way Home" is not like most grief memoirs in one important respect: It's about losing a friend, not a parent, child, sibling or spouse. Caldwell's best friend, the writer Caroline Knapp, died within weeks of being diagnosed with cancer in 2002; she was 43. While Caldwell describes this in the book's opening sentence as "an old, old story," it's also a new one because the friendship between Knapp and Caldwell was the product of unprecedented historical conditions. Both women were single by choice, living happily alone (Knapp once wrote an essay for Salon titled "The Merry Recluse"), and devoted to their vocations.

That doesn't mean either was isolated. At one point, Caldwell recalls how, in the days after Knapp's death, she comforted herself by making a list of her surviving close friends and posting it on her refrigerator: "These were the people I could call at three a.m.," she explains. "I never called anyone at three a.m., probably because I had the list." If Knapp had once been the first name on that list, she was never the only one.

The current age suffers from a failure of the imagination when it comes to intimacy between people linked by neither blood nor sex. Knapp and Caldwell first bonded as fellow dog owners and over the next six years they met up every few days to walk their dogs together and talk for hours. (The title refers to something Knapp would say in the car on the way home, a way of prolonging the conversation.) "Finding Caroline," Caldwell writes, "was like placing a personal ad for an imaginary friend, then having her show up at your door funnier and better than you had conceived." Although Caldwell still had both parents, back in Texas, and Knapp had her twin sister and an on-again/off-again lover they both referred to as "the last good boyfriend in America," they spent holidays and summer vacations together. After Knapp died, Caldwell "suspected no one would ever know me so well again."

Sociologists sometimes describe what Caldwell and Knapp had together as a "family of choice," and most of "Let's Take the Long Way Home" recalls how they made this miracle together. Caldwell was a decade older, an adventurous Westerner transplanted to Cambridge, Mass., book critic for the Boston Globe and an inveterate rule-breaker. Knapp, the good girl in the duo, was the daughter of a psychiatrist and an artist and had stayed in her hometown. She'd survived anorexia and alcoholism, and wrote a celebrated memoir about the latter. A history of alcoholism was something the two women had in common, although Caldwell rarely shared this fact with anyone besides fellow AA members. Both women were writers, of course, with a ravenous appetite for solitude, but also, as "Let's Take the Long Way Home" demonstrates, a great talent for friendship.

Caldwell's writing is serene, wry and meditative, rather than raw, but even so, it's clear she lost one of the most important relationships in her life when Knapp died. I half expected that someone would carelessly wind up offending her by not taking it seriously enough -- after all, the two women were "just" friends. To my surprise, the only person who ever tried to do this was Caldwell herself, who in the confusion and doubt of mourning would sometimes say, "Oh well, maybe we weren't that close." Anyone who heard this, she reports, "would burst out laughing."

"Let's Take the Long Way Home" is a slender and beautiful book, and if Caldwell's language occasionally fogs up with immaterialities, she never stoops to tear-jerking or sentiment. Which is not to say she won't make you cry. It might be something as simple as her first-page description of love's tempo that does it: "For years," she writes, "we had played the easy daily game of catch that intimate connection implies. One ball, two gloves, equal joy in the throw and return." Anyone who's ever had that and lost it -- or can imagine what it might feel like to lose it -- will recognize how precious it is. The losing isn't the exceptional part of this story; everyone loses something, sooner or later. The wonder lies in finding it in the first place.

More Salon stories by or about Caroline Knapp

Books Caroline Knapp Memoirs Our Picks What To Read