Why is America so fixed on food fads?

This summer's flings include popsicles, cakeballs and macarons. But what makes us such promiscuous eaters? 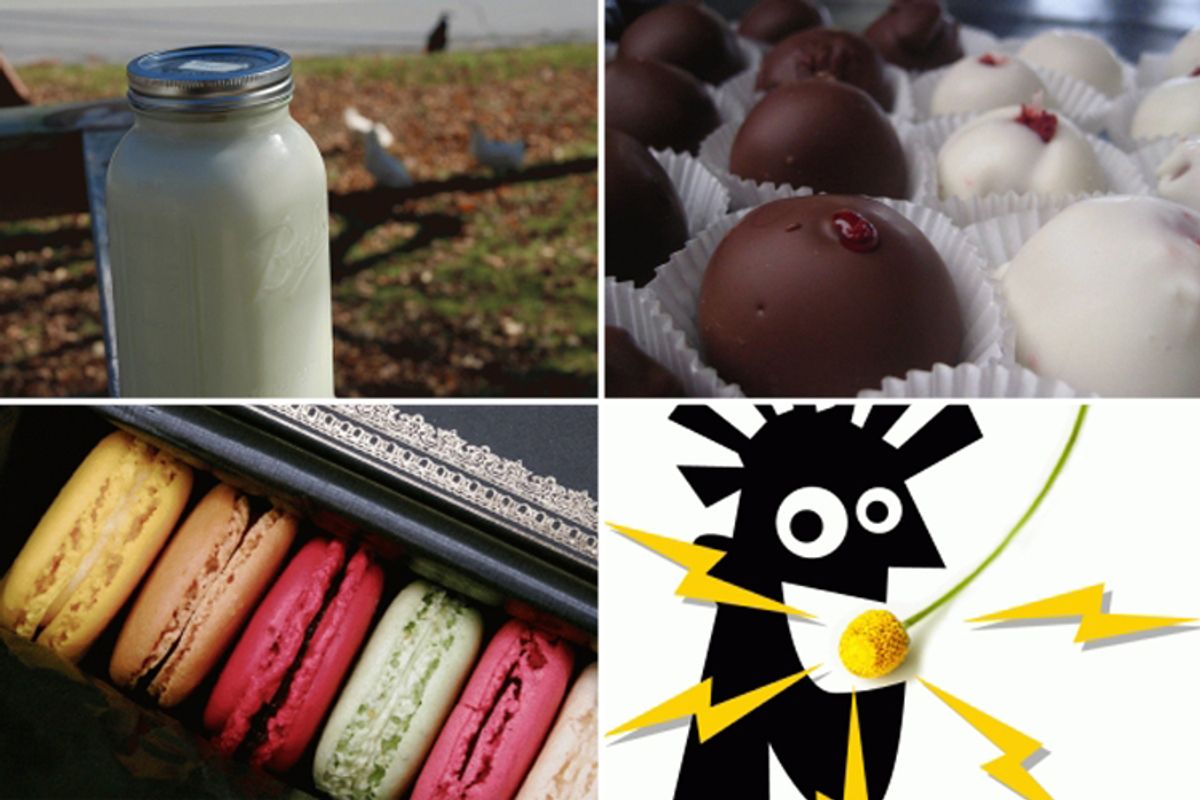 Last week, the New York Times announced that the Korean taco was going to be the next big thing riding into the East Coast, white-hot from its domination of Los Angeles -- another episode in America's passionate love affair with faddy foods. This summer's flings include the popsicle, cakeballs and macarons, heirs apparent to the cupcake. And that, of course, doesn't include a host of other nutritional and diet fads (the hallelujah diet or ingesting a tapeworm, anybody?).

As a recent immigrant, I have to admit that I find this kind of promiscuous eating baffling. In America, I'm frequently overwhelmed by the media frenzy around the next new flavor, by the e-mails in my in box every morning aiming to keep me on-trend. I'm confused by the conflation of food and fashion and amazed that food trends change as often as a clothing house's collections. In India, where I grew up, food is either the transmitter of tradition or pure body fuel, sacred custom or a simple means of sustenance. Even when I lived in London -- a city as given to consumerism as New York -- I didn't see the kind of food fetishism I've encountered here.

So what is it about America's history, culture or psychology that makes its landscape so ripe for the emergence of one fashionable food after another?

The most common answer, the one that's also been cited by Michael Pollan, is the belief that America's unique eating habits are a direct product of its immigrant past. With no one food tradition to hold on to, Americans eat in a vacuum, moving easily from fad to fad, from one nutritional trend to another. "There's always been a frontier mentality. People come here to discover a new place, a new culture," says Kara Nielsen, a food trendologist with the Center for Culinary Development.

First generation immigrants are often eager to stay true to the food traditions they brought from their homelands. But by the time their children grow up, those ethnic foods are abandoned for more generic eating patterns -- a mishmash of the cuisines that make up America's cultural milieu. Eventually, this makes them more susceptible to new cuisines and flavors.

But perhaps there is another explanation as well. Other countries have also faced wave after wave of immigration without resorting to faddy eating. Instead, they've internalized the different influences to create a multidimensional, entirely unique whole. Peru, for example, whose national cuisine weaves in and out of Spain, Japan, China and the Caribbean.

Warren Belasco, an American studies professor at the University of Maryland, thinks that the ability to move quickly from one food to another is also linked to the ability to see food as a marketable commodity -- ultimately a product of America's abundance. "Food, particularly meat, has always been very readily available. The fact that food is so cheap has shaped how we see it. We hold it less respectfully. We are more frivolous about it," he says.

In her book "The Century in Food," Beverly Bundy says that America has never suffered a famine as sweeping as the one that devastated Ireland. "Our rivers and coasts were teeming with fish and other seafood. Visiting Europeans wrote of being stunned at the amount of meat Americans consumed ... In fact at the beginning of the century, there was already enough food that Americans were already beginning to examine the way they ate."

Elsewhere in the world, the uncertainty of weather cycles, resulting in an unpredictable ebb and flow of food availability, bestowed upon food a certain sacredness, a reverence that would never allow it to be swallowed up by marketeers and admen. In America, glossy billboards of dressed-up food products are as ubiquitous as images of shiny cars or sexy teenagers advertising Ralph Lauren's latest collection. "This is clearly a product of affluence," says Krishnendu Ray, a professor at New York University's Steinhardt School. "When we have enough, we add an aesthetic element to something that previously was a necessity," he says. America, says Ray, has one of the highest wage levels in the world, and the average person is most likely to spend that money on food. And so, food becomes akin to clothing -- a manufactured commodity, a symbol of affluence and hipness.

For a country with a large-scale obesity problem, America is astonishingly obsessed with diets, calorie counts and nutrition. The last few years have seen the emergence of the paleolithic diet, the raw food diet, the ridiculous cookie diet, the even more ridiculous blood type diet ... you get the picture. Americans willingly swing from miracle food to miracle food: from quinoa to kombucha, from phytochemicals to lycopene. "The American mind-set involves putting value in science over tradition. There has always been an interest in the next big health claim," says Nielsen.

America, says Ray, has always seen itself as a modern society. And modernity involves looking resolutely into the future, trusting science and experts and, finally, perfecting oneself. "The United States has always been very forward looking. And part of that refusal to look at the past means believing that science will come up with the right answer. And so we jump from nutrient to nutrient, thinking that we finally may have found the right one," he says.

But Ray is quick to point out that the emphasis on modernity and science are the very things that have made America successful. "Progressiveness is the hallmark of American society," he says.

The more I think about it, the more this phenomenon seems true. America's fickle eating habits are actually a function of everything that America has gotten right, or at least, a result of things that make America so uniquely American: science, progress, open-mindedness, abundance and an emphasis on commerce and entrepreneurship. The "frontier mentality" that allows people to quickly adopt new foods also represents liberalism, flexibility and a willingness to experiment.

And so, when Pollan calls America's food habits a "national eating disorder," one wonders if the so-called disorder is, in fact, irrevocably entangled with America's power, a byproduct of its very values.