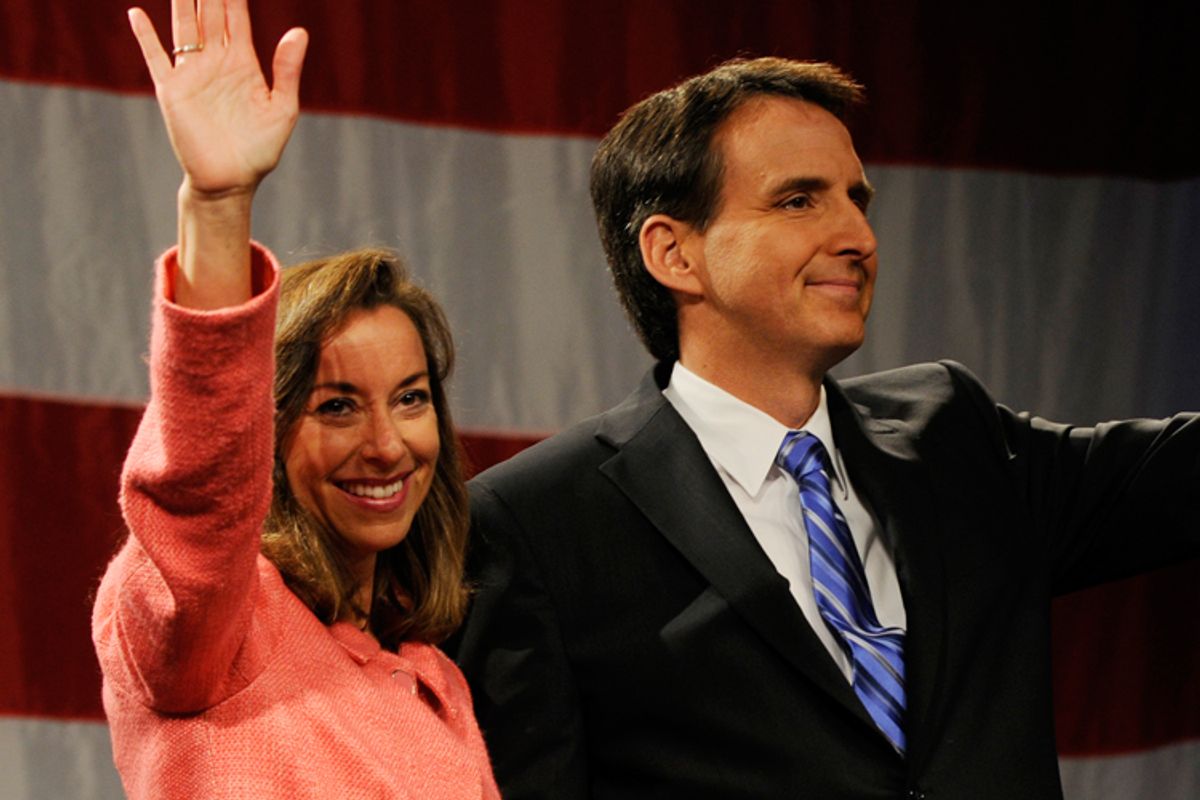 Minnesota Gov. Tim Pawlenty and his wife Mary in April.
--

Minnesota governor and former mullet enthusiast Tim Pawlenty is leading the 2012 Republican field in "going to Iowa." (Which is pretty easy, because Iowa is two or three hours away from St. Paul, depending on traffic.) Pawlenty has gone to Iowa five times in less than a year. (Which actually ties Rick Santorum's current record, but Santorum is, I think, just trying to remind people that he is a human, and not a long-forgotten dirty joke.)

What message is Pawlenty bringing to Iowa? He is your candidate -- if there is some reason you cannot bring yourself to support Romney, or Huckabee, or (god help us) Palin. You know, but you need to vote for someone. Also: He has a hot wife!

For this loyal Republican crowd, the setting was a familiar one. The opening line was not.

"I’m very thankful for my red-hot smoking wife, the first lady of Minnesota,"  said Gov. Tim Pawlenty, pointing to his wife, Mary, who was standing a few feet away.

As the audience roared, she said with a smile: "Who, when they’re turning 50, doesn’t like to be called a red-hot smoking wife?"

Yes, who among us does not not like NASCAR and "red-hot smoking" wives? Communists, probably. And Minnesotans, who are pretty tired of their governor; despite serving two terms, Pawlenty never actually won a statewide election with a majority, thanks to Jesse Ventura's rump "Independence Party." (Pawlenty's trip received slightly less media attention in the Twin Cities area than the presence of hundreds of dead crappies in Lake Harriett.)

Pawlenty has raised $2.6 million for his PAC, and he handed a couple of checks to some GOP candidates while in Iowa. He also said a thing about foreign policy, which is pretty cute:

To assert credibility on foreign policy, he mentioned his recent trips to Iraq and Afghanistan. America needs to project strength, he said, criticizing the Obama administration for scrapping Bush-era plans for missile defense installations in Poland and the Czech Republic. Such decisions send "messages of equivocation" to American allies, he said.

"We need to make sure there is no confusion about where we stand, what we stand for and who we stand with," Pawlenty said.

As you can tell from his statements, Pawlenty doesn't really have enough fire in his belly to credibly run in this hysterically angry climate. But maybe things will have calmed down a bit in 2012? Either way, if you want a tall, milquetoast, pro-business Republican for president, Mitt Romney is your man. Unless you are scared of Mormons, in which case there is this other guy, Tim.