Squeezed by college debt and the recession, these Californians found a way to get by -- unless it gets legalized 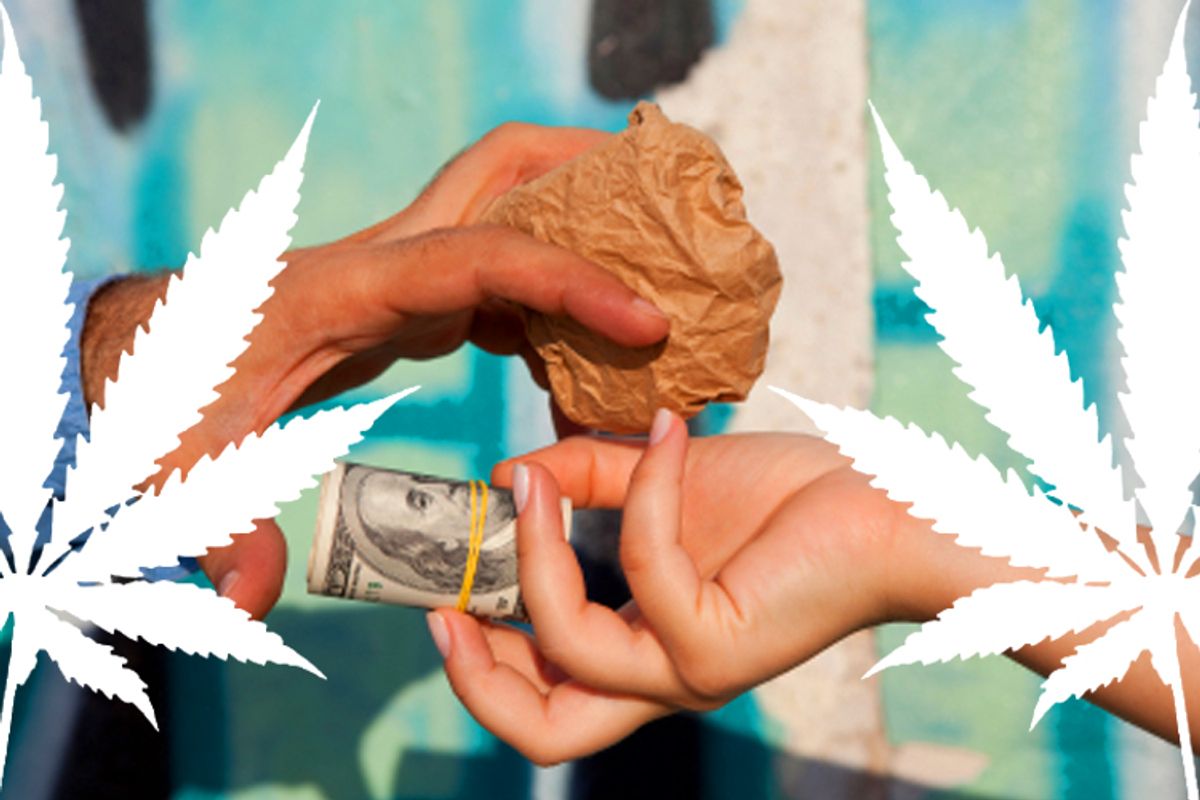 It's harvest time in downtown Oakland.

"Paul" leads his roommate "David" (not their real names) into their apartment's spare third bedroom. They are soon joined by their friend "Adam," who has come to help with the evening's task. A floor-to-ceiling curtain of thick white plastic partitions off a corner of the room. Paul pulls back a part in the drape. Bright light and warm, herb-smelling air pour through the opening. Inside the enclosure, 18 mature members of California's largest cash crop crowd each other. The plants, hybrids of the so-called Casey Jones and Hindu Skunk strains, started off weeks earlier as tiny potted cuttings. Now they are as tall as their growers and bristling with dozens of sticky, hairy, cone-shaped buds.

The guys chat and sip beers as they snip branches from the plants and carefully trim away excess leaves and stems. Later, Paul will hang the pruned buds up to dry in a nearby closet. The work is slow and tedious. Pretty soon, the small talk subsides. It's going to be a long night. It's barely nine o'clock in the evening, and no one expects to finish until well into the wee morning hours. Then comes the hard part. They have to figure out how to sell the stuff.

All in all, Paul and David hope to reap a little over a pound of dried, salable smoke from the crop. That's too miniscule a yield to interest the local medical marijuana dispensaries, so they plan to peddle their wares in smaller quantities on the black market, an ounce or less at a time. For all of their efforts, and the legal risks involved, Paul, David and a third partner who doesn't take part in the daily operation of the business each stand to clear about a thousand bucks after expenses. That's a thousand dollars in profit for several weeks worth of work. Not exactly a windfall. But in these tough times, Paul says he's happy to have any source of income.

"For me, I'm just looking for this to help me pay rent, utilities, basic things like that," the slender, bearded 27-year-old said. "Once this gets going, it requires minimal day-to-day maintenance. It's just starting it up that's hard, but I have time for that right now."

Like millions of his fellow Californians, Paul has a lot of extra time on his hands these days, because he can't find a decent job. A year ago, he never expected to be eking out a living as a small-time cannabis grower and dealer. He had just graduated from a local university with an advanced degree in one of the hard sciences. His goal was to teach. But he made the mistake of finishing his studies in the middle of an economic meltdown. He soon found himself sending out résumés to schools that were cutting their staffs, not looking to bring on new teachers just out of graduate school.

After weeks of searching, the only job Paul could get was a part-time gig serving coffee and making sandwiches at a local cafe. It paid minimum wage. Then his third roommate decided to move out, opening up a spare bedroom in the apartment he shares with David. The two friends decided not to post the rental on Craigslist. Instead, they chose to make a more lucrative use of the space.

First, Paul went out and paid $100 for a medical marijuana prescription from a local doctor, claiming he suffered from knee and back pain, as well as mild attention deficit disorder. In less than hour, he had his "215 Card," named after 1996's Proposition 215, which legalized medical pot. In Oakland, possessing a card allows one to grow up to two dozen plants at a time for personal use. Next, Paul went to a nearby cannabis dispensary and purchased 18 off-the-shelf, ready-to-grow clones, or cuttings. Add some potting soil, lights and some 3 mil plastic sheeting, and the boys were in business. Eventually, they plan to combine their personal use allotments into a medical cannabis "collective," allowing them to tend three times as many plants. But make no mistake, while the growers may sample their product from time to time, almost none of them will be for personal use.

"This is definitely a money-making operation," Paul confirmed. "At least, we hope it is."

It is an open secret that many Californians pay for medical cannabis prescriptions without necessarily needing them to treat serious conditions. But a lesser known fact is that a good number of small growers in the state use their scrips as cover to produce crops destined for the recreational market. Given the drug's current quasi-legal status in the state, particularly in Oakland, starting a modest operation is just too tempting to pass up for many unemployed young people like Paul or for others, like David, looking to make extra cash.

"It pretty much feels legal to me already here in Oakland," David said. "I mean, I don't want the landlord to find out, but other than that, I'm not scared."

Like his friend Paul, Adam is a 27-year-old with an advanced degree from a well-known university. Unlike Paul, Adam was lucky enough to land a decent job out of graduate school. But even with a steady salary, the tall, Nordic-looking blond struggles to pay his bills every month. He is a new father. His wife is in graduate school herself now. And he is trying to pay down tens of thousands of dollars in student loan and credit debt. For him, as for Paul and David, the state's less-than-stringent medical marijuana laws and the readily available supplies at local cannabis dispensaries made growing part time an easy choice. He is currently using a prescription for "joint pain" to tend 12 plants in his Berkeley home's garage.

At today's prices, each of those $12 clones can yield up to $400 worth of high-grade product. That's a serious rate of return, at least on paper. But as farmers have known for thousands of years, the three young growers have discovered that agriculture can be tricky. Paul and David's plants took a month longer to ripen than expected. Mold wiped out one of Adam's early crops. Then there is the even larger headache of bringing their harvests to market and getting a fair price for them, a process that could get even more complicated in the coming months.

Polls show about a 50-50 chance that California voters will opt to legalize the cultivation and sale of marijuana statewide this coming November. A recent Rand Study said that could drastically lower the price of cannabis. Looking to maximize the tax revenues that a yes vote on the legalization measure could bring, Oakland's City Council just moved to allow the city to issue permits for Walmart-size weed facilities that could flood the market with cheap, mass-produced bud, bringing prices down even more.

But even before these initiatives, industry insiders say the going rate for weed had been dropping steadily.

"Two years ago, I was selling pounds for $4,200. Now, I'm selling those exact strains for $3,600 and I'm hearing guys grumble at paying even that much," said "Henry," a 29-year-old broker for growers in Humboldt and Mendocino counties. Henry regularly ferries large wholesale shipments of pot to medical cannabis dispensaries in Southern California.

"I don't know anybody in this business that's getting rich right now," he went on. "I mean, you've got electric bills, water bills, overhead. At the end of the day, a lot of these guys are busting their asses just to break even. Guys who are doing these small-time closet grows, I don't know how they're making it."

"Closet"-size growers like Paul, David and Adam answer that they're making it by keeping their expectations low.

"I have a lot of expenses. Student loans, rent, childcare, credit cards," Adam said. "Really, I'm just hoping that growing will help free me up a little bit."

Not surprisingly, Adam plans to vote no on the November legalization measure. For his part, Paul says he will vote yes, even if it does stand to wipe out his new business venture.

"There's no doubt that an operation like this benefits from the black market," he said. "I mean, it's still worth more than its weight in gold right now. But if anybody can suddenly grow it, it'll probably wind up worth about as much as tomatoes."

J.B. Powell is a freelance writer living in San Francisco. His first novel, "The Republic," is available from Livingston Press.