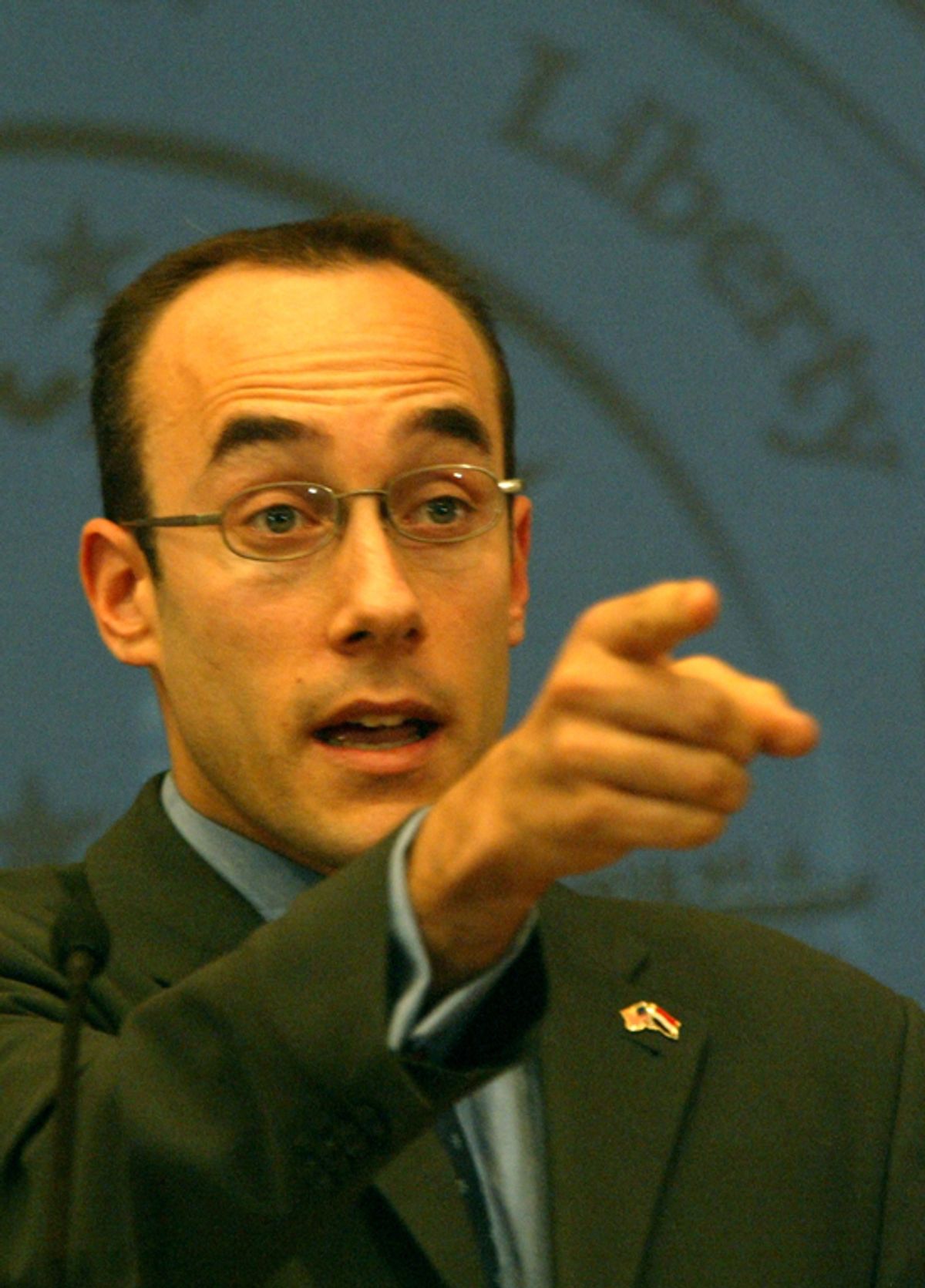 Dan Senor the spokesman for the U.S.-led Coalition Provisional Authority takes questions from journalists during news conference at the coalition forces headquarters in Baghdad February 3, 2004. The United States is committed to a July 1 handover of power in Iraq, despite Sunday's suicide bombings against key Kurdish allies, and is actively weighing compromise proposals for the transition, U.S. officials and experts said on Monday. REUTERS/Peter Andrews PA (Â© Reuters Photographer / Reuters)
--

Dan Senor, the Iraq war spokesman turned investment banker and professional neoconservative, has an op-ed in the Wall Street Journal advancing a novel argument against the so-called "Ground Zero Mosque": the organizers of the project should move it because the U.S. military once changed the name of the invasion of Afghanistan to placate Muslim concerns.

That's right, Senor, who thought about running for Senate in New York this cycle and clearly has political ambitions, is actually arguing that America has shown sensitivity to Muslims by altering how we refer to our devastating invasion and occupation of a Muslim-majority country. So as they see thousands of their civilian compatriots being killed around them by U.S. troops, Afghans can have some comfort that they are experiencing "Operation Enduring Freedom" rather than "Operating Infinite Justice."

Here's the passage from the op-ed:

The American people have shown themselves to be respectful of Muslim religious sensibilities—even in cases in which it was not clear to them why or how those sensibilities were being offended. We shall confine ourselves to one example among hundreds. The original name for the military operation against the Taliban and al Qaeda in Afghanistan was "Operating Infinite Justice." Several leading Muslim scholars and clerics objected that the term was offensive to Muslims because "infinite justice" can come only from Allah. The American government immediately changed the name to "Operation Enduring Freedom," with the full support of the American people.

The name seemed to us to be immaterial to the mission—which is why we judged the change to be a worthy gesture to people whom we did not wish to offend but hoped to honor. Similarly, the exact street address of your cultural center cannot matter to the performance of its mission—but it very much does matter to the perceptions of your fellow Americans. We urge you to reconsider.

Note also the false opposition between "America" and "Muslims" that is embedded in Senor's argument.

Meanwhile, a vote today by a New York landmarks board removed another hurdle for the Muslim community center, hastening the time when everyone will forget about this made-up issue.