Save your marriage by letting your husband cheat! 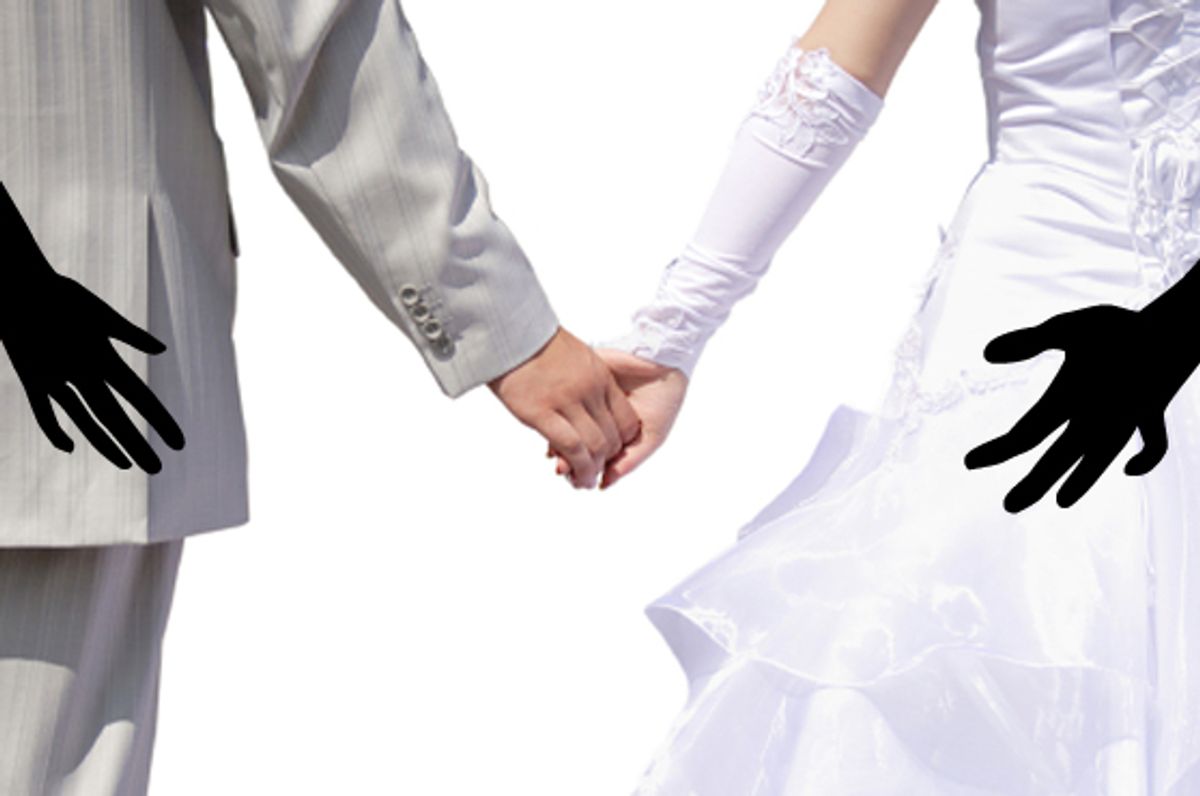 Holly Hill knows all about extramarital affairs. After spending a year as a mistress for hire, she wrote the memoir "Sugarbabe" (Side note: If you want to get a book deal, do anything for a year) -- and the pseudonymous author has plenty of wisdom for married women who don't want to discover their spouses have been "hiking" the "Appalachian Trail."

In a polarizing interview with CNN Tuesday, Hill made the case for managed adultery, explaining, "a woman that negotiates infidelity with her partner is far more powerful than a woman who is sitting home wondering why he's late from the office Christmas party," because "it's better to walk the dog on a leash than let it escape through an unseen hole in the back fence." And if you're the sort of person who views your spouse as an easily trained pet, that should work out great.

I'm all for whatever floats anybody's relationship boat -- especially when it involves two people being direct about their own desires.  Straying, after all, can take the form of anything from a Spitzer-like hooker situation to a Sanford-esque meeting of the "soul mates." So if two people have very different sexual appetites, being upfront about outsourcing intimacy seems considerably less cruel than condemning one partner to either lying or going without a very basic human need.

But I don't believe there's any foolproof way to game the system. The heart, the mind and the loins rarely stay obediently confined to the gated communities in which we try to keep them. One day you've got a great, no-strings-attached thing going with a sex buddy. The next you realize, oh crap, I have real feelings for this asshole. One day you say you don't care if your lover gets a stroke job from someone else. The next day, you do, terribly. We can think outside the box all we want, but there's a reason there's a Facebook relationship status called "it's complicated."

But honest to God, how much more of this "Wanna keep your man? Let him stray" tripe are we supposed to swallow? And, when, by the way, is anybody going to write the book about how to hang on to us ladies? (Hint: We too enjoy getting laid.)

"I think that cheating men are normal," Hill explains. "Monogamous men are heroes. Monogamy does have a place in relationships, but not on the long-term. Men are hard-wired to betray women on the long-term." There you have it: A man and a woman can take the same vow, but the guy who keeps it is a hero. Hey, where should the women who stay faithful line up to get their medals? And while we can trot out the old male's got to spread his seed thing till the cows come home, the implication that one is either a "hero" or a "betrayer" is a mite reductive when applied to anything with a frontal cortex.

Even Hill's lip service to sauce for the goose falls sexistly short: Women, she says, "definitely need to negotiate infidelity as well, especially because that will generate her man's competitive nature. The more lovers the woman has, the more attraction the man will have for his partner." That's right; bonking some other dude isn't about getting your own ya-yas out, it's just about making yourself more desirable to your main man. Excuse me, I have to go claw my face off now.

Instead of taking a shot at the complexity of desire, the goddamn miracle it is when two people actually sync up on a physical and emotional level, we get the same Mars and Venus shinola disguised as emancipatory frankness. Being in love isn't like walking a dog on leash – it's more like putting a cat on one. It's crazy. It's irrational. Sometimes, despite our most sabotaging efforts, it even works. Honesty is a fine start. Acknowledging that a healthy relationship is more than a woman doing whatever she can to hang on to her man is an even better one.