The ridiculous "$#*! My Dad Says" controversy 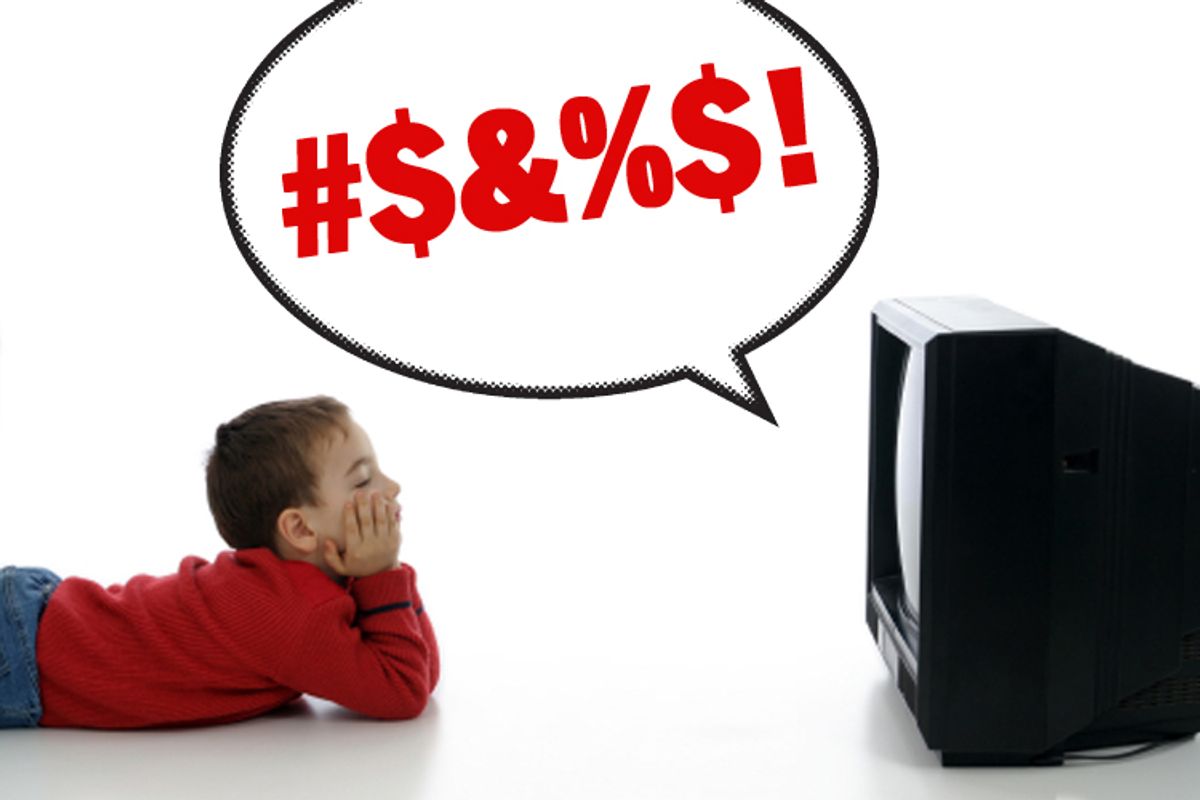 CBS officially refers to it in print as "$#*! My Dad Says." In promos, it's "Bleep My Dad Says" -- not "[bleep sound] My Dad Says," but "Bleep My Dad Says." And its identifying image, of William Shatner with tape over his mouth, makes it clear this sitcom is well aware of that which cannot be said. It's shit. As in, the Twitter phenomenon Shit My Dad Says, the thing that turned into the best-selling book "Sh*t My Dad Says," now watered down even further into a series of nonsensical characters to become a prime-time sitcom on the Tiffany network.

But even the mere suggestion of profanity is enough to set concerned viewers reaching for the smelling salts and threatening to boycott the show's advertisers. On Monday, the Parents Television Council informed the world that CBS is "on notice," stating, "Unless or until CBS chooses a different title for this program, we are urging advertisers to avoid sponsoring such an abomination purported to be lighthearted fun." Bitch, please.

As James Poniewozik observed in his Time blog Wednesday, the outrage seems to be having less effect on advertisers than the apparent banality of the show itself.  He further astutely points out that the concern isn't entirely baseless -- and separating adult- and child-friendly content is unenviably challenging when it comes to the title of a show or a movie, as last spring's tap dancing around "Kick-Ass" proved.

I don't think life has to be one big potty-mouthed free for all, even if my own frequently resembles a Mamet play directed by Quentin Tarantino and starring a cast of Teamsters who've just stubbed their toes. The nuances of audience and intention are key. A person's ears and eyes – and those of that person's children – are entitled to the courtesy of reasonable moderation. Yet when I see Dollar Sign Hashtag Asterisk Exclamation Point My Dad Says, I do not think, you haven't sufficiently protected my family from this "abomination," CBS! My main concern for my children is that now I have to explain the damn reasoning behind it. Sorry, kids, some people are offended by certain words, so they came up with this bullshit way of symbolizing it without saying it. Which is how my kids wind up learning the word "bullshit."

In trying to use profanity while not technically articulating it, we wind up in a loophole realm of self-aware absurdity.  Just look at the gleeful way programs like "The Daily Show" and "South Park" lavishly throw around the bleep button. That's not avoiding the words -- it's brattily getting around them, in a gambit as old as a chorus of "Miss Lucy." What point does a bleep or a series of dashes make, when all it does is dress a word in a sexy, see-through protective layer, the better to be unwrapped in your own mind? Oh, F-word,  I know what a nasty little thing you really are when you get together with your last three letters. You are not boinking or canoodling or doing the do, are you? No, you're the reason nobody ever asks, What the "make love"?

I don't get ruffled about run-of-the-mill cursing, and I think Goldman Sachs' recent edict that employees not use cuss words -- even if they judiciously throw in the asterisk -- is hilarious. (Also hilarious -- that the company won't tell its staff outright what those verboten words are.) But I do understand the tremendous power of words to be truly hurtful and offensive. There are a handful with a long, rich history of demeaning and belittling others, and I don't have enough hate within me to apply them to anyone else. Yet even then, does it mean they can't be said?

This summer, the news media's twisting of itself into contortions to report the content of Mel Gibson's alleged tirades without coming out and repeating the words he used has been a spectacle unto itself. When I've written about the controversy, I've used them without equivocation, because they are the crux of the story. And there's got to be a difference between being the guy who calls his girlfriend a "cunt" and being the person who says, "that guy called his girlfriend a cunt."

There wouldn't be much point in having ostensibly naughty words if they didn't make us feel so good saying them -- and if there weren't anybody around to get pissed off when we do. That's precisely why CBS opted not to call its new series "Stuff My Dad Says" – where's the mischief in that? Yet when my daughters sing along with Avril Lavigne's "Girlfriend," changing the lyrics to "Bleep yeah I'm the mother bleeping princess," I don't think I've done my job to shield them from foul words. I just think they've watched enough television to catch on to the cleverest bad word the English language evolved. I'm not fooled. And as an all-purpose mot juste, "bleep" can kiss my ass.